Call of the wild
CPW, City look for ways to tackle human-bear conflicts before they start 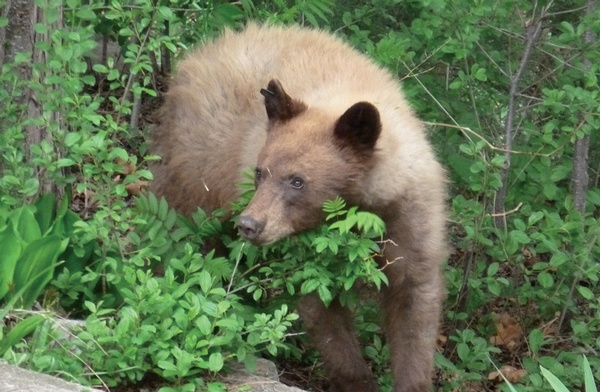 As bears awake from their winter nap, local wildlife experts and the City are working to keep them from becoming problem bears with new automated bear-resistant cans as well as a new tracking app./ File photo

Black bears are emerging from their dens this spring to a very different world than the one they fell asleep in. This winter’s historic snowfall – much of which continues to fall in the higher elevations – brought needed moisture to the dry landscape.

The one concern with such cool temperatures this late in the season, however, is the threat of a hard frost. It could wipe out the bear’s natural source of food – acorns and chokecherries – making it even more likely they’ll seek out needed calories in local dumpsters and trash cans.

“We’ve been right on the razor’s edge, but we haven’t had that killing frost,” Matt Thorpe, area wildlife manager with Colorado Parks and Wildlife, said Tuesday. “We’re definitely keeping an eye out.”

The last time a late frost took out those natural foods was 2017. That year, bears were spotted all over town, breaking into homes, cars, dumpsters, trash cans and back yards. By the time the bears denned that winter, the area recorded one of its highest bear mortality rates – 25 within the city limits and another 11 in La Plata County.

In an attempt to deter bears from coming into the city for food, the Durango City Council approved an emergency ordinance that fall, increasing the penalties for city residents who did not properly secure trash cans.

Researchers with Colorado Parks and Wildlife found during a six-year bear study that having – and properly using – bear-resistant trash cans dramatically decreased bear sightings and conflicts.

With those facts on the table, the city has been distributing bear-resistant cans for the past several years to all residents. As Phase II of that campaign, fully automated containers are now being delivered to westside neighborhoods, from Ella Vita Court to West 23rd Street, and Columbine Drive to the south side of Arroyo Drive between Highland and Main avenues.

These new containers – which come with a $4.12 monthly charge for those who don’t already pay for bear-resistant trash cans – unlock automatically when tipped upside down by the city’s trash collection truck, and lock again once they’re back on the ground. According to Bryan Peterson, executive director for Bear Smart Durango, the benefit is that the can no longer needs to be unlocked by residents on the day of collection or the night before – which, unfortunately, left plenty of time for bears to rummage through the trash.

Garbage, whether from a residential can or commercial dumpster – is the top attractant for bears. Coming in at a not-to-distant second, however, are chickens.

Currently, city residents are allowed to keep chickens, but they are not allowed to have electric fencing to protect the chickens from predators.

In 2017, when bear-human conflicts were a real concern for residents, Peterson wrote the City Council, asking it to reconsider the ban on electric fencing, but councilors chose not to have the conversation at that time.

This year, after being contacted by residents, Thorpe reached out to Council again about the issue. He said CPW would be happy to participate in any discussions, answer questions or address concerns.

“Electric fencing is one of the most effective ways to deter bears,” he explained. “It’s one of those things that’s on duty 24 hours a day.”

City Councilor Kim Baxter was also contacted by residents about having the discussion, and said she’s certainly open to the idea.

It’s uncertain why electric fencing was prohibited in the first place, but Baxter, like others, thought it could be a safety issue. She added that electric fencing has changed over time, and become far safer than it was even just five years ago.

There’s nothing on the Council’s schedule right now, but it likely will be part of a future study session.

As wildlife officials discuss ways to deter bears from coming into urban areas, they’re also looking to remind residents how important it is to report any sightings or conflicts.

Peterson said a lot of people have a perception that if they report bear activity, the bear will “get in trouble.” The truth is, if a resident sees a bear and doesn’t report it, by the time CPW officials get involved options for dealing with the situation are far more limited.

“The main problem (in 2017) was the first time CPW was hearing about it was when the bears were breaking into houses,” Peterson said.

Thorpe said when bear activity is reported, the agency has several ways to deter the bear. Once the bear is breaking into cars or homes, though, it’s a different story. “We just don’t have many options at that point,” he added.

This year, the CPW will have another tool when it comes to addressing human-bear conflicts. In years past, CPW officials would file bear sightings and reports on paper. Not only does that create quite a stack, but it’s difficult to track hot spots. This year, the CPW will be using new technology that allows officials to submit reports to an electronic database that can be accessed on smart phones.

This new system will create a map of sightings and hot spots. Eventually, Thorpe said, they hope to include reports submitted to Bear Smart Durango and La Plata County’s Living with Wildlife Advisory Board, and even expand it so residents can access some of the general information.

In addition to the new database, Thorpe said the CPW is bringing on a bear intern, whose main focus will be all things bear. “By having this position, hopefully we can be more proactive and increase engagement with the community,” he explained.

So far this year, Thorpe said CPW has had few calls about bear activity, which he thinks is a good sign.

“With all this moisture everything looks awesome right now,” Peterson explained. “Maybe it’s still too early to tell, but it might be another banner year for food.”