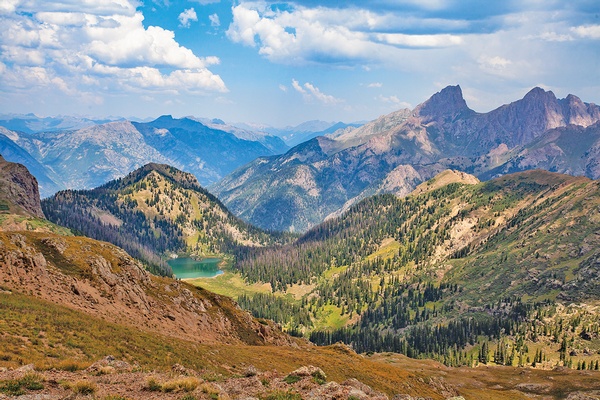 The CORE Act, introduced by Sen. Michael Bennet, and the Colorado REC Act, released by Rep. Scott Tipton, are similar in that they both look to create about 60,000 acres of new permanent protections in the San Juans. They differ, however, in that Tipton's bill removes protections for nearly 40,000 acres elsewhere in the state. /Photo by Stephen Eginoire

One came out back in January. The other was released just last week. Both are authored by members of the Colorado delegation in Congress. Both are meant to protect public lands in the state. Both are sweeping, comprehensive packages with several legislative pieces.

But, there are some stark differences between the two.

First to come out was the Colorado Outdoor Recreation & Economy, or CORE, Act. It was introduced in late January by Sen. Michael Bennet, D-Colo., and co-sponsored by U.S. Rep. Joe Neguse, D-Lafayette.

These four pieces would result in the protection of about 400,000 acres of public lands across Colorado. Some would become new wilderness, others wilderness study areas, and some would be guarded from future oil and gas development.

The most recent public lands package came from another member of the Colorado congressional delegation, Rep. Scott Tipton, R-Cortez. His version is called the Colorado Recreation Enhancement and Conservation Act, or Colorado REC Act.

Overall, the REC Act would designate 70,000 acres of new wilderness and remove the Wilderness Study Area designation from about 39,000 acres.

While the CORE Act is already making its way through congressional committees, Tipton’s version – which he called a discussion draft – has yet to be formally introduced.

He’s publically reached out to residents and stakeholders for comment, but those who are already speaking out aren’t happy with it.

“Representative Scott Tipton’s proposal is a deliberate attempt to muddy the waters when it comes to our public lands,” Sarah McCarthy, West Slope field manager for Conservation Colorado, said in a statement.

“If Colorado’s leaders want to support meaningful protections for our public lands, they should co-sponsor the existing CORE Act, a comprehensive bill whose protections have been vetted and supported by hunters, anglers, businesses, local elected officials, and Coloradans across the state for over a decade.”

Although the CORE and REC acts have key differences, they also have some similarities.

One thing the two have in common is the San Juan bill.

This includes designating about 30,000 acres of new wilderness near Telluride, Norwood, Ouray and Ridgway and about 20,000 acres between Ophir and Silverton to create the Sheep Mountain Special Management area. It also prevents future mineral development for about 6,500 acres in Naturita Canyon.

Jimbo Buickerood, lands and forest protection program manager for the San Juan Citizens Alliance, said he is pleased to see Tipton take a step in the right direction when it comes to this piece.

“We’ve been asking for engagement on the San Juan bill since he took office,” he explained. “This is a good sign.”

But, Tipton’s REC Act is still missing some key elements.

One of those is oil and gas development protections for about 200,000 acres in the Thompson Divide near Carbondale and Glenwood Springs.

Buickerood described the CORE Act’s Thompson Divide piece as a community-driven, grassroots effort that’s been years in the making. Like the San Juan bill – which was put together by a diverse group of stakeholders over the past decade – it’s been thoroughly vetted by the people who would be most impacted by it.

“The CORE Act is much more in tune with grassroots communities,” Buickerood explained.

But, instead of incorporating the Thompson Divide protections in his version, Tipton added the Colorado Land Management and Recreation Act.

This piece of the REC Act would remove more than 39,000 acres of Wilderness Study Areas in southwest and northern Colorado – including Menefee Mountain, Weber Mountain, Cahone Canyon and more – essentially lifting the protections those designations provide.

Tipton said the Bureau of Land Management, the agency that would take over management of these lands, found these areas to be “unsuitable for wilderness designations.” The reasons he gives for the release is fire mitigation and better management of noxious weeds.

But, that reasoning doesn’t fly with everyone.

“It’s surprising and difficult to understand why he wouldn’t pick up the Thompson Divide bill,” Buickerood added.

Another major difference between the two acts is Camp Hale.

One of the sections in the CORE Act is the Continental Divide Recreation, Wilderness and Camp Hale Legacy Act.

This piece calls for the permanent protection of about 100,000 acres in the White River National Forest along the Continental Divide, including the creation of a first-of-its-kind National Historic Landscape area surrounding Camp Hale.

Camp Hale was the home to the U.S. Army’s 10th Mountain Division, who not only were crucial to the Allied victory in World War II, but also helped spawn the state’s outdoor recreation and ski industry.

Although both Bennet and Tipton have said publically they’re willing to work together, they have yet to take a seat at the same table.

Even when congressional leaders are getting along, it can take years to pass public lands legislation. And with the current climate in Washington, D.C., it’s unknown how far either of these proposals will get in the coming year.