Call of the wild
Wolves are knocking on Colorado's door. Will voters answer? 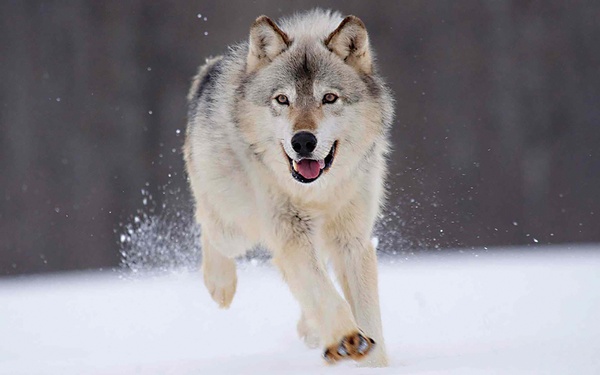 Will more gray wolves like this soon be roaming Colorado? Voters will decide whether or not to formally rein- troduce the species to the state next November./Courtesy photo, Sierra Club

Wolves going to the ballot box

One of Colorado’s most enduring – and controversial – debates of all-time will be going to a vote later this year. Next November, the wolf will be running on the Colorado ballot.

This week, the Colorado Secretary of State announced that Proposed Initiative 107 (aka “Restoration of Gray Wolves”) had garnered enough signatures to win a place on the 2020 ballot.

“This is historic, the first time people of a state will have the chance to directly say we want to restore an endangered species,” Rob Edward, president of the Rocky Mountain Wolf Action Fund, said in a statement. The group has been working to get the question on the state ballot for the last several years.

Under another recent measure, ballot initiatives must gather at least 5 percent of the total number of votes cast during the previous general election – in this case 124,632. It was estimated that out of the 215,000 signatures submitted, about 138,000 were valid, more than meeting the threshold.

The initiative would to return wolves to the Western Slope, in areas west of the Continental Divide. The re-introduction process will include a series of public meetings and be overseen by a commission using the “best scientific data available.” A fund will also be set up to compensate livestock owners for their losses. The initiative calls for wolf paws to hit Colorado soil – in specially designated areas – no later than Dec. 31, 2023.

Wolf proponents argue that the apex predator, exterminated from that state 75 years ago, is a key species in helping to restore balance to the state’s ecosystem, particularly among deer and elk populations. They also say Colorado is the missing habitat link between gray wolf populations to the north in Wyoming and Mexican gray wolves, to the south, in Arizona and New Mexico. Supporters also say reintroduction to Colorado will help give the gray wolf – which is listed as endangered or threatened – a leg up on long-term survival.

“Historically, wolves were an essential part of the wild habitat of Colorado,” read the language of the initiative.

The initiative also goes on to stress that the restoration of the gray wolf “must be designed to resolve conflicts with persons engaged in ranching and farming.”

However, ranchers and about a dozen rural counties are not having any of it. A dozen of the state’s 64 counties have come out against the reintroduction, including several on the Western Slope such as: Moffat, Routt, Hinsdale, Montezuma, Rio Blanco, Garfield, Archuleta, Mesa and Montrose.

The opponents argue that wolves – unlike lynx and other previously released species – cannot peacefully coexist with the state’s nearly 6 million people. A group called “Colorado Stop the Wolf Coalition” has formed to oppose the reintroduction.

The state wildlife commission has also come out opposed to releasing wolves. In 2016, Colorado Parks and Wildlife commissioners voted against any sort of formal wolf reintroduction. However, the state still has a policy that it will take care of any wolf that wanders into the state on its own.

It will now be a lot easier for undocumented residents to legally drive in Colorado. As part of the “More Colorado Road and Community Safety Act,” signed into law by Gov. Jared Polis last May, nine more Colorado DMV offices – including the one in Durango – will be offering drivers licenses. The move is meant to increase access to immigrants in rural communities, who formerly had to wait several months and drive several hours for an appointment at an approved DMV office.

By having a license, many workers in agricultural and mountain communities will not only be able to legally drive to work or bring their kids to school but obtain car insurance.

“Colorado is taking an important step toward improving the safety and security of all of its residents with implementation of the ‘More Colorado Road and Community Safety Act,’” Marissa Molina, spokeswoman for national immigrant advocacy group FWD.us, said. “Expanding access to driver’s licenses will make life better for countless hardworking Colorado families, grow our economy, and make our state stronger in every way.”

In addition to Durango, the four other new DMV offices offering driver’s licenses include Montrose, Glenwood Springs, Lamar and Pueblo. Alamosa and Sterling will be added to the list in June.

In 2013, Colorado lawmakers passed bipartisan legislation allowing all Colorodans – regardless of immigration status – to obtain driver’s licenses. However, only a limited number of DMVs were authorized to issue the licenses, creating a backlog from the onset. At a Senate Finance Committee hearing in 2019, community members testified about the long waits and hours-long drives, which in turn, resulted in missed work and additional costs.

The I-Drive Coalition, in partnership with FWD.us, led efforts to expand access to licenses. The initiative was also supported by farming, dairy and other business groups. The program is being paid for by the license fees.