Can it happen here?
Cold isn't the biggest threat to Colorado's grid – other climate disasters might be 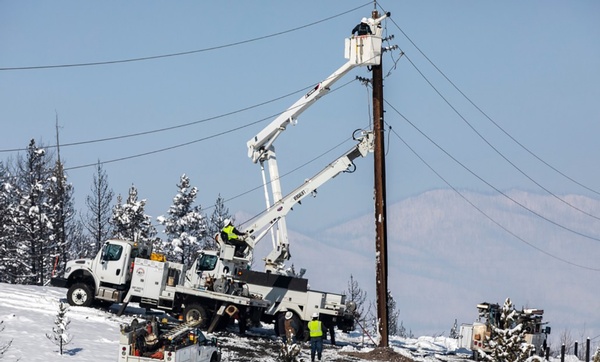 A crew repairs power lines south of Grand Lake on Oct. 27, 2020, that were damaged by the East Troublesome fire./ Photo by Hart Van Denburg/CPR News

On a summer evening in 2018, tracer rounds from a shooting range ignited a fire near Basalt. Dry weather let the blaze grow into the Lake Christine Fire, which would burn more than 12,000 acres and destroy about half a dozen homes.

It also burned three of four transmission lines running into Aspen. If the fourth had gone down, the city could have lost electricity for weeks, according to Holy Cross Energy, the local power supplier.

“They had a near miss,” Mark Dyson, a researcher for the Rocky Mountain Institute who studies Colorado’s energy grid, said. The clean energy think tank would later help the utility harden its grid against future threats from extreme weather.

Those challenges are getting more attention after a recent cold snap caused millions to lose power in Texas. The same frigid blast froze wind farms and restricted the natural gas supply in Colorado, but the state did not experience widespread blackouts.

Dyson warns future disasters might not be so forgiving. Hackers or terrorists could find ways to cripple the electrical system. Climate change is also set to increase the frequency and severity of extreme weather events and wildfires.

Yes. The most notable example occurred in Northern Colorado, where communities rely on the Platte River Power Authority for electricity. One of its wind farms froze on Sun., Feb. 14. A far larger problem occurred later in the day when Xcel Energy curtailed the supply of natural gas to preserve fuel for home heating. That meant the Platte River utility couldn’t flip on turbines to meet peak energy demands.

The Colorado Public Utility Commission has since opened an investigation into how utilities handled the cold snap. The competition for natural gas caused a spike in prices. Commissioners plan to find out if any of those costs could be passed onto ratepayers.

• Why is everything worse in Texas?

The main reason is the difference between states’ natural gas systems.

A few factors helped keep the lights on in Colorado. Dyson said the state’s natural gas infrastructure is built for cold weather. Most Colorado homes also rely on gas furnaces for heat, which means cold temperatures don’t cause a massive spike in electric demand.

• Are other weather events or natural disasters more likely to cause power outages?

A 2010 state report found winter weather is one of the most common problems for utilities in the state. Infrastructure in rural counties is also damaged by lightning, strong winds and fires, which bring down lines and cut power.

Dyson said utilities are set up to handle those local power outages. A report he authored looks at the potential for more expansive power losses, where natural disasters or malicious attacks take out fuel supplies or power plants. Those disasters could create “cascading failures” affecting far more energy users. Extreme weather like cold spells, high winds and wildlife could all cause such a failure in Colorado. The state’s critical energy infrastructure is also at risk from physical attacks or solar storms.

Not necessarily. Renewables could actually help make the grid more resilient with the right technologies.

In the aftermath of the Texas power outages, fossil fuel advocates and some Republican politicians blamed frozen wind turbines for the problems. Texas officials have since debunked the claims, showing natural gas failures were the main cause of the blackouts.

Nevertheless, Colorado fossil fuel advocates insist the state’s grid needs natural gas to remain reliable. Lynn Granger, the executive director for the American Petroleum Institute Colorado, told CPR News natural gas is unique in its ability to “ensure grid reliability,” especially as the state transitions to more and more wind and solar. While those energy sources depend on the weather, gas turbines can power up so long as fuel is available and systems aren’t broken.

Clean energy advocates counter renewables could help solve a deeper problem with traditional energy grids. Dyson said 20th-century power systems rely on centralized plants, which means a single failure can cascade down to millions of homes. New technologies, like solar panels and energy storage, could allow a community to generate and distribute power at a much more local level.

• What puts more strain on the grid: extreme cold or extreme heat?

Experts say extreme heat is a far bigger challenge. On a hot summer afternoon, people crank up the air conditioning and create huge spikes in electricity demand. Utilities are also more equipped to handle extreme cold in Colorado than in Texas, said Justin Brant, co-director of the utility program with the Southwest Energy Efficiency Project.

Hotter temperatures brought on by climate change, however, could pose a greater risk to the grid down the line. Brant said energy conservation could help protect the electrical system. Having smaller grids all over the state instead of a few larger ones could also help prevent large-scale outages.

• Are wildfires a major threat to the electricity grid?

In short, yes. Brant said wildfires are both a cause and effect of problems with the electric grid.

Though they can burn power lines and cause outages, those lines can also start fires when there are strong winds and dry conditions, such as the Camp Fire in California in 2018. Utilities in the state now turn off the electric grid when there is high fire danger, a strategy that is also being discussed in Colorado as climate change makes large wildfires more common, he said.

• Many utilities hope to use large batteries to store renewable energy. Are those systems vulnerable to climate threats?

Though overheating has caused battery explosions in hotter states like Arizona, that is less of a concern in Colorado, where the weather is milder, Brant said.

In the future, the main issue with batteries will be whether they can store enough power when renewables are not producing energy, said Will Toor, the executive director of the Colorado Energy Office. Right now, he said, batteries wouldn’t last through a stretch of cold and gray weather like what hit Colorado this month.

“When you get those multi-day weather events, under current battery technologies you probably need some other form of backup, or ultimately zero-carbon generation, in order to provide enough storage,” Toor said.

Experts say microgrids installed around essential services, such as hospitals or emergency operation centers, could be “islands” amid otherwise dysfunctional grids.

“You can imagine a world where you would have significant on-site solar, significant battery storage, and an ability to operate those critical facilities even during periods when the grid was down,” Toor said. “I think we will see a substantial move towards microgrids, especially for those kinds of critical facilities.”