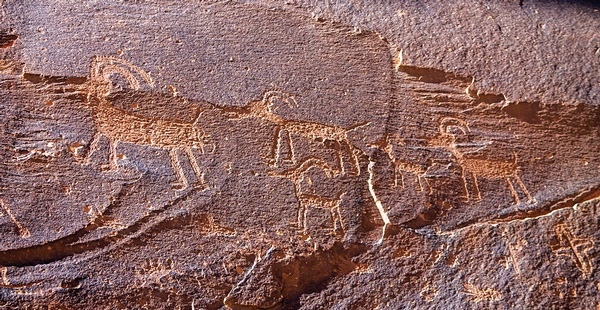 The lack of a crowd is notable, because the establishment is a popular one in downtown Moab. And Moab is almost always swarming with folks looking to get out on the surrounding public lands, which, themselves, have grown more and more crowded with each passing year.

Berger is a wildlife biologist who does “applied science for conservation.” These days he’s focused on a handful of desert bighorn herds that roam the rocky landscapes around Moab, in Canyonlands National Park, and on the San Rafael Swell to the west of there. Specifically, he’s wondering how those aforementioned crowds are affecting the animals.

“What mammal shows up most in rock art and petroglyphs?” Berger asks. I ponder this for a few seconds and, though I’ve looked at a lot of rock art, I admittedly have no idea. “Bighorn sheep!” he answers.

Later, when I look back at my photos of rock art, I immediately find one with a herd of bighorn rams etched into a desert-varnished rock face. That the animals would be so popular among rock artists should not surprise. Bighorn sheep once may have numbered in the millions in the Interior West, from the high Tetons to the lowlands of Death Valley to the crinkled landscape that is now Canyonlands National Park.

Archaeologists excavating Fremont and Ancestral Puebloan sites in pre-inundation Glen Canyon found seven times more bighorn bones than those of deer. And when Francisco Atanasio Dominguez and Silvestre Vélez de Escalante crossed the Colorado River north of the current location of Glen Canyon Dam in November 1776, they saw signs of huge bighorn herds: “Wild sheep breed hereabouts in such abundance that the tracks look like those of great droves of tame sheep,” they noted in their journals. “They are larger than the domestic ones, of the same shape as theirs, but very much swifter.”

Then the white settlers came with their rifles, livestock and extractive ways and killed off entire herds, both intentionally, via hunting and unintentionally, by way of grazing.

Livestock operators drove millions of head of livestock into Western mountains and deserts in the mid- to late-1800s. Even the most remote parts of Canyonlands teemed with sheep and cattle for more than a century, beginning in the 1870s, and some 4,755 domestic sheep still wintered on the White Rim in the mid-1960s. Bighorns are especially vulnerable to pathogens carried by domestic livestock, and the cow and sheep elbowed in on the bighorns’ territory and gobbled up their forage.

Beginning in the 1970s, grazing was phased out of Canyonlands, and by 1981, the livestock were gone. But by then, the humans had arrived en masse, first as miners in search of uranium, then as tourists, motor-bikers, boaters, jeepers, backpackers and, a few years later, mountain bikers.

As more domestic sheep, cattle and humans encroached on their territory, bighorn populations declined. By the mid-1970s, Utah’s entire bighorn sheep population numbered 1,000 or less, and the desert bighorn had been extirpated in Arches, Capitol Reef and Zion national parks. When Utah declared bighorns a protected species in 1986, fewer than 150 of the ungulates remained in Canyonlands National Park. This scant collection of herds, one of the only native populations remaining in the West, was used to seed reintroduction efforts elsewhere. Now some 3,000 bighorns roam the state, with a handful of herds scattered around Southeastern Utah.

Yet the numbers aren’t growing as quickly as wildlife officials would like, and officials at Arches National Park, home to about 75 bighorn sheep, describe the mortality rate of first-year lambs as “alarming in recent years,” adding that no specific cause has been identified. Berger, who is a faculty member at Colorado State University, has spent the past couple of years in the Moab area looking for specific causes and trying to find out if and how long it takes for the bighorn to habituate to increasing human activity in their midst. He hopes his research will help public land managers come up with solutions.

Berger launched his career with bighorn sheep – his doctoral thesis at the University of Colorado-Boulder focused on them – and later studied the effects of helicopters on bighorns in the Grand Canyon. He then shifted to the international arena, working in Namibia to stem rhinoceros poaching, and later in Russia, researching musk ox and climate change. That’s when he got arrested for getting in the way of the wrong people. He avoided a sentence in the gulag but was booted out of the country. He came to southeastern Utah to decompress and soon found himself studying bighorns, once again.

It’s fairly obvious that the increasing numbers of “side-by-side” OHVs, which are like modern, souped-up dune-buggies, scare the heck out of bighorn sheep, most other forms of wildlife and humans like me. Less clear is exactly how so-called quiet recreation affects the animals. “They may look calm and look serene, but that doesn’t mean they are,” Berger says. A 2001 study conducted in Canyonlands National Park found that hikers disturbed bighorns even more than mountain biker or jeep traffic – though it’s careful to point out that may be because mechanized transport is confined to established roadways in the park, which bighorns may avoid or be accustomed to.

And if mountain bikers or hikers stress the animals, then the animals likely will avoid the areas frequented by people. That, in turn, might mean ewes stay up high in the spring, when they are in the third trimester of pregnancy and are jonesing for the nutrient-rich grass in the lowlands, which could lead to less healthy lambs that are more vulnerable to disease, predation and starvation.

Moab-area modes of recreation also include motorized paragliders – which must look to wildlife like the return of the pterodactyls – drones, BASE jumpers, rock climbers, backcountry skiers and rock-spire slackliners. As the front-country gets increasingly crowded, the more adventurous recreationists are heading deeper into the backcountry – and bighorn habitat.

Berger’s not looking to shut down vast swaths of landscape, even if he could. “We just want it to be a little gentler in the areas where these animals need security,” he says. He points to a compromise he worked on in Wyoming, where a 40-mile-long, one-mile-wide, no-drilling and no-fencing corridor was established for pronghorn migration. In other parts of the West, areas are closed to rock climbing during raptor nesting season, and trails are made off-limits during a few months in winter to give elk and deer a break. In the Tetons this past fall, a collaborative working group recommended prohibiting skiing in small sections of the mountains to protect bighorn sheep.

Berger acknowledges that super popular areas, such as the Slickrock Trail or Factory Butte near Hanksville, which the Bureau of Land Management has sacrificed to OHV use, are never going to be bighorn breeding grounds. It’s probably too late to preserve or even rehabilitate those areas. Rather, he and his colleagues are doing triage, working to keep populations of the remaining herds above critical levels by directing use away from prime habitat. All the while, he keeps a key question in mind: What do we want this land to look like through the eyes of an iconic species a decade from now?

Berger finishes his coffee, and I decide to run a local trail that slices across the urban-red rock interface. As I run, I think about what Berger said about seeing the land through the eyes of the bighorn. I do my best to soften my step on the red earth as I remember something he said that really sums up the conundrum facing those concerned about recreation’s impacts on wildlife and wild places: “We want people to visit places, we just don’t want them to destroy them.”