Caught in the web
City's online sales trend upward, while state tax system gets bogged down 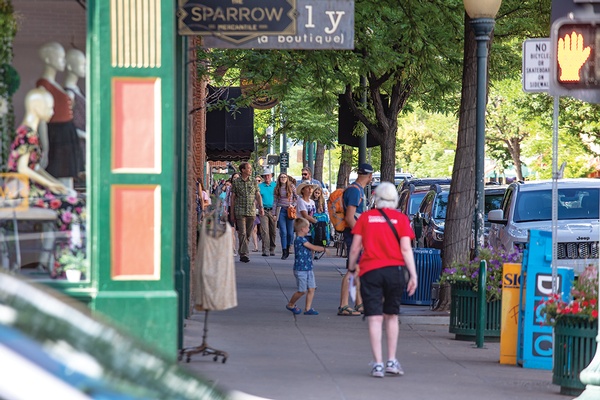 Visitors and locals alike shop along Main Avenue in downtown Durango recently. After a tough tourist season last year, the city is enjoying a boost in sales and tax revenues - even in online sales. As important as all sales tax revenues are to the city, it's the local shoppers that bring in the biggest piece of Durango's sales tax pie. Online sales only make up about 6.5 percent of total tax revenues./ Photo by Stephen Eginoire

In recent years, the City of Durango has enjoyed a growing number at the bottom of its monthly sales tax report – Sales Tax Only.

This category, which primarily consists of internet sales taxes, is up almost 15 percent compared to last year. While it’s only 6.5 percent of the city’s total sales tax pie, it’s a number that’s been trending upwards for years. “It’s growing,” Tim Walsworth, executive director for the Business Improvement District, said. “It grows every single month.”

And, it’s continued to grow every single month, according to Walsworth, for the past 19 months straight.

He admits part of the reason for the growth is the ever-increasing popularity and ease of online shopping. Another part, however, is about a case decided last year by the U.S. Supreme Court.

“Part of the reason has to be some of the Wayfair decision,” he added.

About a year ago, the U.S. Supreme Court ruled on the case South Dakota v. Wayfair. The 5-4 decision dramatically changed the way interstate commerce works.

In the past, retailers needed to have a physical presence – like a storefront, storage facility, employee or contractor – in the area in order for that state, county or city to collect sales taxes. That’s no longer necessary.

Now, it’s about the physical address of where the product is delivered, also called destination sourcing. So, if a book is delivered from Amazon to Durango, the online retailer needs to collect the state, city and other taxes for that specific address and pay them to the right people.

Communities across the nation hailed the decision because it meant each would get its share of sales tax revenues. But, for Colorado, it actually meant putting a bright spotlight on the state’s complicated system.

When an online retailer like Amazon, for example, sends a product to Colorado, it’s up to Amazon to figure out in which of the state’s 344 cities, counties or special  districts the buyer of that product lives, calculate the taxes specific to that location, and remit those taxes to the entities in question.

With all the different municipalities and districts overlapping in this state, there are more than 700 possible tax totals. In addition, there’s no one-stop-shop for figuring out who’s owed how much and how to pay.

It quickly became clear it wasn’t going to be easy to pay those taxes in the Centennial state. In an effort to address the complicated web of sales tax computations online retailers are facing, the Colorado Legislature passed two bills on the issue in their most recent session – House Bill 1240 and Senate Bill 6.

These laws make several big changes. First, they repeal some outdated laws for clarification and put the court’s decision about destination sourcing into law. Second, they define what makes someone an online retailer, seller, facilitator and the like, including who’s responsible for collecting and remitting the sales taxes.

The third, and likely the biggest change, is they tasked the Department of Revenue with creating something called a Global Information System (GIS). This would be the one-stop-shop for calculating sales taxes. Any online seller would be able to type in any Colorado address, and the system would calculate what sales taxes were owed and to whom – well, almost.

Home-rule cities are not required to participate in the new GIS system; they are only encouraged to do so.

A home-rule city is one that can make its own rules, and have complete autonomy when it comes to sales taxes and collections. There are 71 home-rule cities in Colorado, including Durango.

According to Durango’s Finance Director Julie Brown, city officials haven’t decided whether or not to participate in the state’s GIS system.

But, they’ll likely have some time to think about it. The Colorado Department of Revenue has said they don’t know when this system will be ready – nor are they willing to even guess.

Until it is in place, an exception was created for in-state retailers with less than $100,000 in online sales a year. So, smaller businesses with few online sales wouldn’t have to worry about trying to calculate endless tax equations.

Once the GIS system is up and running, however, even those little Colorado mom- and-pop shops will be required to pay up. For now, it’s only the big retailers, like Amazon, Wayfair, Ebay or Etsy, who need to navigate Colorado’s sticky web of sales taxes.

And, it’s uncertain how it all will affect Durango – if at all. The growing trend for online sales tax collections was going on before the South Dakota v. Wayfair decision. And, according to Brown, the city has been collecting online sales taxes from these retailers for years.

Walsworth said it’s good that the decision means towns and cities – like Durango – across the country will be able to collect additional taxes. The rub is that there’s nothing like keeping it all local.

“There’s all that recirculation of money that doesn’t happen at all with internet sales,” he added.

Get the latest on the state’s new sales tax laws, sign up for email updates and even watch some webinars on the issue at www.colorado.gov/pacific/tax. 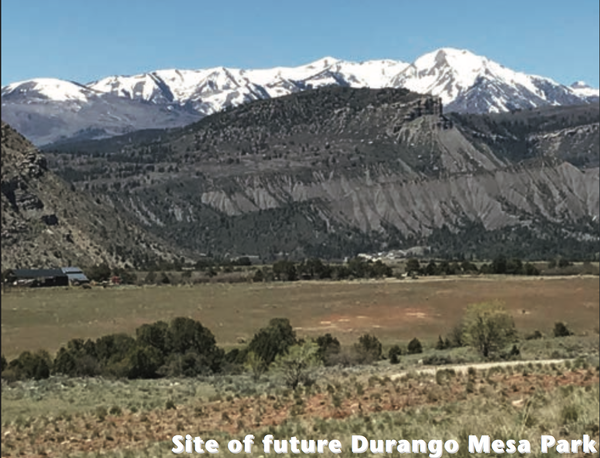 Thinking about the possibilities of Durango Mesa Park? Wondering about a brand new Rec Center, or perhaps a connected trail system running from the north to the south end of Durango?

Well, wonder no more. The city has released the draft of its Parks, Open Space, Trails and Recreation Master Plan. The plan will serve as the guiding document for all parks projects over the next decade. It considers smaller ones, like some new bathrooms at Rotary Park, and bigger ones, like a new ski lift at Chapman Hill and the elusive Durango Mesa Park.

Over the past couple years, city officials have been working on an update of the 2010 version, hoping to take the city into the future where parks and recreation becomes, according to the draft plan, “the reason why people want to be in Durango.”

The team who put the plan together – including city staff and members of PROS Consulting – will make a presentation for the public at 5 p.m. Monday, July 22, at the Rec Center. The Durango City Council will then hash out some of the details at a Study Session the next day at 4 p.m. Tuesday, July 23, at City Hall, 949 E. 2nd Ave.

Once both the public and City Council get a chance to comment, the plan will be updated and sent back to the Council for final approval.

To check out the plan, comment or get more details on the process, visit the plan website at www.durangoparksplan.com. Comments can also be emailed to rec@durangogov.org or made at the meeting Monday. For more information, call the Parks and Rec Department at 375-7321.