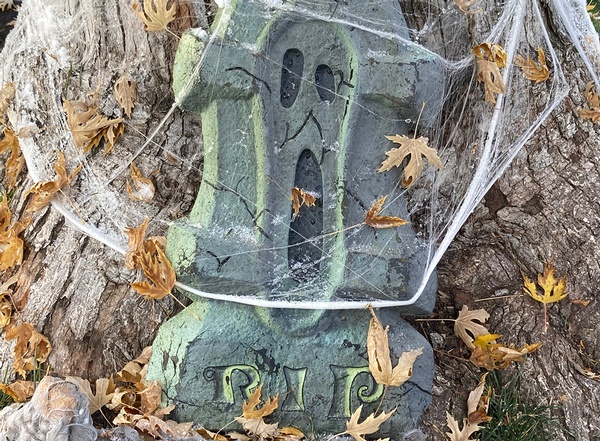 I’ve always wanted to write a newspaper column called the “Iffy Reporter.” That way if I screw up on the facts, my ass is covered. But today, dear reader, we’re not dealing so much with facts, but “opinions.”

Of the ghostly variety.

My first stop is the Durango Elk’s Lodge, a nearly 100-year-old institution on E. Second Avenue, where a lively Halloween party is happening outside.

“Our ghost is named Robert,” says Eric, who, at the ripe age of 40, is already a PER (past exalted ruler) at the club. “Robert was the bar manager of this place back in 1927. Hung himself in the third stall of the men’s room.”

Eric is partying with his mother, Chris, who encountered the wrath of Robert about 10 years ago.

“A bartender took me where she knew he hung out downstairs. She told me to stay back a bit when we heard light bulbs crashing to the floor. We heard them crash, but could never find them.”

Her son offers me a rare tour of the place; me with a draft of Pabst and him with a vodka something.

“We’ll start in the dungeon,” he says, aka the boiler room, where entrance to the underground tunnel is blocked with lawn chairs, old lamps and other junk. “If we walked straight that way, we’d find ourselves in the alley under 9th Street.”

It seems the door is always open to the past here. We work our way up, past a safe room that’s actually a fake door, to the “museum” on the fifth floor, where Robert supposedly kept an apartment. It still has the original plumbing and is packed with odds and ends of a gambler’s past: old chips and dice, playing cards, snicker balls.

I thank my host and tip-toe my way out and down to Main Avenue into the darkened May Palace, which these days serves take-out only. The phone rings nonstop. In between orders, Ling, the owner, who’s been in this building since ’89, tells me her haunted problems have recently gotten worse.

They don’t mess with her, however. “I tell them don’t touch me. Don’t try to jump in front of me or behind me or scare me. This is my place. You stay in your lane, and I’ll stay in mine.”

Things turn on by themselves like the 140-degree water in the mop sink. Doors open, you hear footsteps.

“They’re a little edgy. Like I said, just recently they’re not as friendly as before,” Ling said. “I try to keep a scientific approach to it. Try to look for a reasonable explanation, but inevitably, I say hi to someone coming in the back door to work, but there’s nobody. You swear to god somebody was there. One employee saw a lady floating in a white dress and ran out of the restaurant and never came back. I say live and let live. Or live peacefully dead? I don’t know.”

I can tell she has dozens, maybe even hundreds, of stories, but before she can go any deeper, the phone rings again. Saved by the bell. I wave goodbye and dash down the street into Old Tymer’s Cafe. A busy waitress named Becca has only worked here since July but said she experiences little “weird” things daily, like the lights swinging on their chains. “Sometimes it happens when we’ve got a lot of people in here, or late at night when we’re getting ready to close. Random movements, but I’m pretty sure I’ve got some friends here.”

Of course, I could have saved myself some trouble and signed up for one of a couple of ghost tours offered in town, both of which are wrapping up for the season.

Joe Nelson hosts a Ghost Walk that covers the more posh spirits up and down E. Third Avenue. Meanwhile, Laine Johnson runs Horsefly History Tours, “history with a bite” that talks about the spirits of the sporting girls and bootleggers that still run downtown. As a wildlife biologist, she went from tagging mountain lions in Wyoming to roping up ghosts.

“It wasn’t my intention,” she said. “It’s what people wanted.” Ironically, when she asks a group if they believe in ghosts, almost nobody raises their hand.

At the Sparrow dress shop downtown, Lottie and the owner, Casey, sometimes smell something icky in the back. The fire alarms go off. The oldest mannequin in the window falls over regularly. “We’ll change it and three hours later we’ll hear a big crash, and it’s fallen over for no good reason.”

Rita, who works at the consignment shop below the Sparrow, has long, blonde hair. She says something happened to her once at Season’s restaurant.

“I was alone, waiting for my sister to finish her shift, when something pulled my pigtails. I felt them pulled straight out. The employees said, yeah we have all sorts of things happen here.” (But when asked about them today, mum’s the word.)

Around the corner, Arley, a longtime bartender at Joel’s, sees a regular ghost come in once a year or so. “He’s a skinny cowboy, pretty tall, with a hat, walking from the girls bathroom to the men’s bathroom. The sensor lights come on. I feel a cold on my back. He always comes at closing time. Hopefully we don’t see him tonight.”

Finally, Molly, who owns Old Tyme Photography, has heard heavy men’s footsteps and what sounds like the thump of a keg being pulled across the floor (the building used to be the Coors Brewery). While she’s currently closed due to flooding issues, in the past she’s also heard a man humming and another singing show tunes. Then, there’s the pearl necklace that appears when you step away, sometimes on the book you were just reading or splayed out on the desk. No one ever touches it or tries to take it home.

“It disappears on its own,” Molly said.

Suddenly, I’m dead tired. This ghost-hunting business is hard work, but on a whim, on my way home, I stop by what used to be Miss Gail’s Inn, a turn of the century house, now apartments, on Main Street in Aztec. I look into the windows of the front door that’s locked, and suddenly a white-haired lady appears from inside.

“I’m a people person,” she said, opening the door, and I think, as opposed to what? She leads me around back to a courtyard where a big spooky cottonwood lives.

“The old hanging tree,” she said.

Great. The owners aren’t in to tell their tales, and I’m kinda glad they’re not. I nearly run back to my car, which I notice is parked beneath the tree. I hop in and turn the key, eager to get back, and for the first time ever, the Toyota won’t start. The battery is drained, and I must call my cranky husband to come get me (outta there).

And that, dear reader, is a true story. Believe it or not. 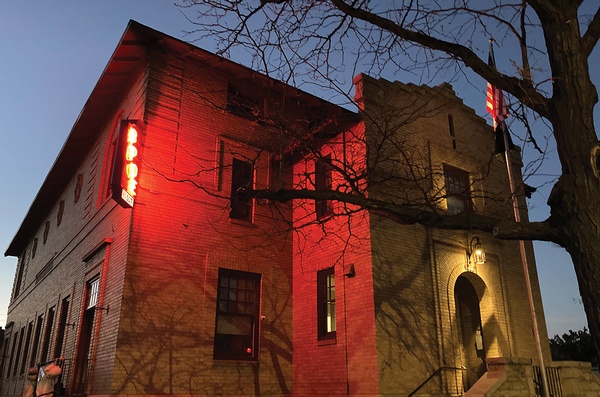 The Durango Elks Lodge's neon sign casts an eerie glow, made all the more eerie by the prospect of a ghost. Elks say the lodge is haunted by Robert, a former bar manager who hanged himself in the lodge in 1927./Photo by Missy Votel