Choke on that
Colorado's skies, air quality worsens as wildfires plague the West 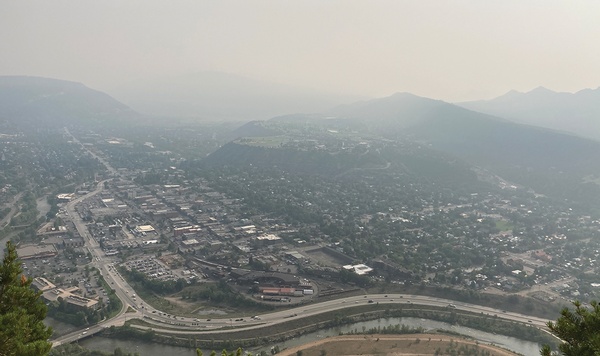 The town of Durango enshrouded in wildfire smoke from California's Dixie Fire in 2021, an ever more common occurrence in recent years./ Photo by Missy Votel

A surge of large wildfires in the West, fueled in part by climate change, has increased the number of days residents are breathing smoke across nearly every part of Colorado, a CPR News investigation shows.

The number of days with smoky skies has grown over the last decade, the data shows, blanketing Colorado from the Eastern Plains to the Western Slope – including northern parts of the state and the heavily populated Front Range corridor.

Over the past four years, residents of Jackson County, on the Wyoming border east of Craig, experienced an additional month of days with smoky skies each year – the largest increase of any Colorado county. During that time, Denver and Colorado Springs residents experienced more than two weeks of additional smoky days each year.

“We tend to think of disasters like floods or hurricanes or earthquakes, but this is a disaster that we are experiencing every summer,” Sheryl Magzamen, an associate professor of epidemiology at Colorado State University, said.

CPR News’ investigation is based on an analysis of federal satellite imagery by NPR’s California Newsroom and Stanford University’s Environmental Change and Human Outcomes Lab. Based on more than 10 years of data collected by the National Oceanic and Atmospheric Administration, the analysis shows an alarming uptick in the number of days residents are breathing wildfire smoke, from California and the Pacific Northwest to the Rocky Mountains and Appalachia.

The analysis details the annual average number of days with smoke overhead during the period of ferocious, climate-induced wildfires, 2016-20, and compares it to 2009-13, before large wildfires became endemic.

The problem with particulates

Wildfire smoke is a mix of various gases, compounds and small bits of haze-causing debris known as particulates.

Fine particulates that measure 2.5 microns or smaller – known as PM 2.5 – are a major component of wildfire smoke and are especially concerning because they can lodge deep in the lungs and enter the bloodstream, triggering or worsening respiratory, cardiovascular and other health problems. Researchers have linked exposure to wildfire smoke to emergency department visits and hospitalizations for asthma, respiratory disease and premature births in Colorado.

Dr. Lynnette Telck, the public health director in Jackson County, said local officials have seen a “huge uptick” in breathing and other health problems related to wildfire smoke. Over the summer, the smoke triggered coughs, sore throats and congestion. One indicator of the increasing problem: A rush of residents sought testing for COVID-19, which shares some of the same symptoms.

Before the increase in wildfires, estimated around 2016, Colorado’s Eastern Plains saw more smoke days each year than any other part of the state, the data shows. Scott Landes, Colorado’s top air quality meteorologist, said that probably stemmed from controlled fires set to clear farmland.

Over the past four years, however, the Front Range, Western Slope and northern regions of the state saw their number of smoke days nearly double – effectively tying the Eastern Plains for the smokiest skies with about 50 smoke days each year, on average.

“A fire blazing up in the hills in Jackson County is going to release a heck of a lot more PM 2.5 than, say, a grassfire in Fort Morgan,” he said.

Colorado’s 2021 wildfire season has been relatively calm, despite an aggressive and early start. But smoke isn’t the only thing making air quality increasingly worse in the state. The Front Range has experienced a record-breaking summer for ground-level ozone, a harmful air pollutant fueled by transportation and oil and gas emissions reacting to heat and sunlight.

This year, as Colorado has gotten a respite from last summer’s megafires, fires burning in other states have only worsened the air across the state’s most populated region.

People generally take precautions when they see flames or smell smoke. But smoke from far-away fires can go unnoticed – leaving people vulnerable to its effects, which can actually be worse than if the fire was close by.

Tamara Sparks, a researcher at the Payne Institute for Public Policy at the Colorado School of Mines, said smoke changes as it moves. Heavier particles fall out, concentrating the amount of unhealthy fine particulates in smoke as it “ages” and moves across the country.

While smoke from distant fires often remains aloft at higher altitudes, weather and other factors can push it close to the ground where people breathe it in.

“Sometimes what’s coming from afar can actually still be quite bad for health, even though it doesn’t smell as smoky,” Sparks said.