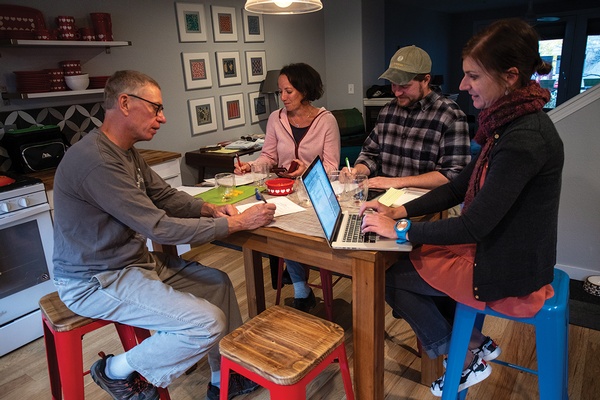 Recently, the core members of La Plata Civil Dialogue – from left: Gary Skiba, Ellen Stein, Greg Felson and Emily Thorn – sat down to lay the groundwork for the group moving forward. Some potential future discussion topics include health care and immigration. There's also an effort to address local concerns like the La Plata County Land Use Code and affordable housing./Photo by Stephen Eginoire

Political conversations have been heating up for some time, but check out any cable news channel, radio show or newspaper today, and it’s clear that instead of a simmer the public discourse is boiling over.

As temperatures rise, many residents in Southwest Colorado – and across the nation – are trying to find ways to cool things down.

Groups like the recently formed La Plata Civil Dialogue and Listen & Learn sessions at Fort Lewis College are gathering locals to talk about politics and policies without blowing their tops.

“I had been concerned for quite some time about how our political dialogue had been, on both sides,” Gary Skiba, one of the minds behind La Plata Civil Dialogue, said. “It just bothered me.”

He noticed a handful of commenters posting on social media echoed these same sentiments, and reached out to them. One of the first people Skiba met with was Bliss Bruen, who passed away unexpectedly this September after a brief fight with cancer.

But what Bruen helped to create was the La Plata Civil Dialogue.

The group held its first meeting a couple weeks ago and, according to Skiba and others, it was not only well-attended in numbers but by people from across the political spectrum.

Liberals, conservatives, Democrats, Republicans and everyone in between showed up to the Oct. 19 meeting. One person even walked in wearing a bright red MAGA hat. But, that’s just fine.

“We were really pleased with the turn out, participation and sincerity,” Ellen Stein, another one of the group’s organizers, said. “I think there’s a huge opportunity here.”

Recently, the group’s core members – Skiba, Stein, Emily Thorn and Greg Felson – sat down to lay the groundwork of what will be the structure, format and organization of the group moving forward.

Some of the future discussion topics on the table are national issues, like health care, energy production and immigration.

There’s also an effort to address topics that matter to residents in this corner of Colorado, like the La Plata County Land Use Code, affordable housing and the lawsuit recently filed against the Durango & Silverton Narrow Gauge Railroad over the 416 Fire.

Discussions on any one of these topics can quickly get heated, particularly on social media sites and in the comments section of area newspapers. But, the organizers of La Plata Civil Dialogue said when  people come face to face, the conversation can change. People remember they are neighbors, not just political opponents.

Skiba and the others believe if people can have a civil discussion about difficult topics, each sharing their opposing views and listening to each other, it would be a win for everyone. And, that’s the goal.

Rachel Turiel, who’s been teaching nonviolent communication techniques for almost two years and practicing it for more than five, said it can done – even on the most polarizing topics.

“I think we have this habitual response when someone has a different view than ours,” she explained. “It can feel threatening.”

But, the clash isn’t usually about the outcome or the objective. It’s the strategy. She said it’s important to remember there’s a human being on the other side of the conversation.

“There’s a human who probably shares some core values,” she added. “The conflict is the strategy.”

The journey to understanding habits, communication and finding those shared values began for Turiel when she stumbled upon a book by Marshall Rosenberg called Nonviolent Communication: A Language of Life.

“I can’t even remember how I found it,” she said. “But it changed my life.”

Between the pages was a roadmap on how to address conflict when it’s happening, and how to prevent it.

In many ways, the process starts at home with each individual person. Turiel said people look at their own habitual responses.

For example, maybe they tend to get defensive went they hear something that hurts them or makes them uncomfortable. Perhaps they feel judged or blamed. But, once a person recognizes his or her habitual response, they can begin to communicate in a new way.

“It’s just the very beginning of a long journey,” she said. “Realizing it is not enough; it’s a daily practice.”

Over the past five years Turiel and others have been getting together to practice nonviolent communication, and she knows some of her former students are creating their own groups.

Her classes tend to fill up quickly, and she’s recently added Part II to the curriculum for students who’ve taken the initial class and want to learn more.

“There is a big need for this in the community,” she added.

Ruby McGeehon, a sociology major at Fort Lewis College, has been organizing what’s called Listen & Learn sessions at the college since September.

It began as a small circle of concerned locals trying to start their own conversation about civil discourse. But within those discussions, McGeehon saw an opportunity to expand the group beyond its original members, who were mostly over 50, and take a multigenerational approach. The idea soon morphed into her senior internship for the fall semester.

Each meeting, she gives the group a different topic to focus on, like immigration or capitalism. She aims to have all sides of the issue represented, either by someone in the group or in research she brings to the discussion.

“Sometimes sharing these things with people we don’t know can be awkward,” McGeehon explained.

But it’s also important to practice being vulnerable in an atmosphere where open conversation is protected and practiced. She said the value of these discussions is infinite.

“Being human is complex, and the conversations we have – or don’t have – are even more complex,” she added. And just like those involved with La Plata Civil Dialogue, McGeehon’s group is not looking to change anyone’s mind. “It’s not yell and convince,” she said. “It’s listen and learn.”

Currently, the group is a small collection of those known as the original guard and FLC students, but McGeehon hopes to eventually open it up to the general public. She’s not sure how this group will evolve in the coming year – or where it will take her.

But she’s certain to take the lessons learned with her. Some are academic, like how to research topics and organize a forum. Others are about social, like how people can come together and talk, despite their differences.

“Progress is not easy to see while it’s happening, and that can be discouraging. But we need to keep talking to each other,” McGeehon said. “I think by practicing more mindful communication we can reimagine our future to be better for more people.”

Peace out and listen up 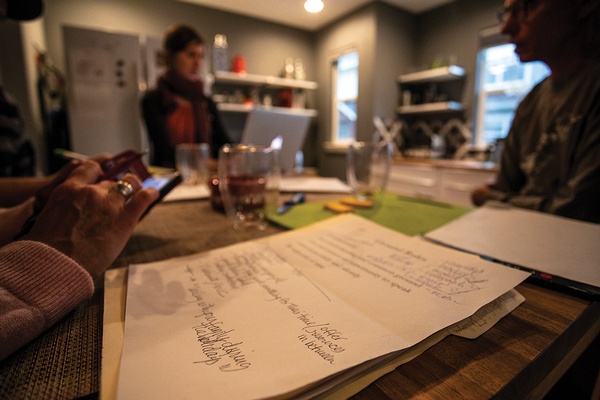 •For the latest resources and meeting times, check out the group at www.facebook.com/laplatacivildialogue

•Ellen Stein, one of the group’s core members, also recommends information and a video from Colorado State University’s Center for Public Deliberation, check it out at cpd.colostate.edu.

• Although these sessions aren’t open to the general public – at least, not yet – you can contact organizer and FLC student Ruby McGeehon at rgmcgeehon@fortlewis.edu

•The inspiration for Rachel Turiel’s classes is a book titled Nonviolent Communication: A Language of Life by Michael Rosenberg. It’s available at the Durango Public Library and Maria’s Bookshop• For more on Turiel’s classes, check out her website at www.6512andgrowing.com or email her at sanjuandrive@frontier.net

•On YouTube, videos are available of Michael Rosenberg, and Turiel recommends a channel called “Cup of Empathy,” which also addresses nonviolent communication