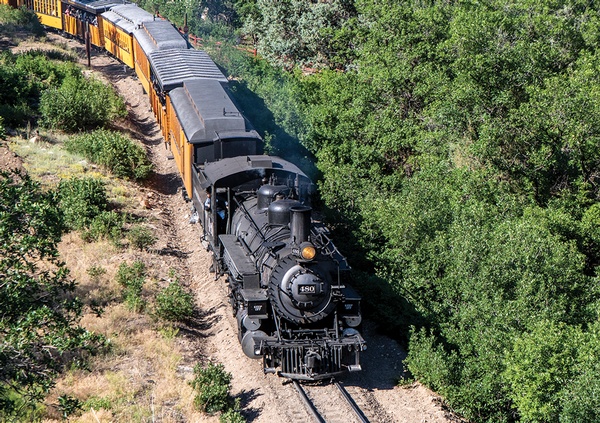 The age of burning coal to fire up the Durango & Silverton Narrow Gauge Railroad has come to an end. Adapting to drought and heightened wildfire risk, this summer marks the first time in the D&SNG’s history where it will rely solely on oil-burning and diesel engines.

Throughout its 140-year history, the D&SNG has shoveled coal into its steam engines to power locomotives to Silverton and back, a 90-mile roundtrip gaining nearly 3,000 feet in elevation.

But in recent years, the D&SNG has received significant pushback from members of the community concerned about environmental impacts: namely the wildfire risk posed by coal-burning engines and the ensuing air pollution that has long vexed residents on the south side of town.

Over the years, the train has tried to improve the situation. To mitigate fire concerns, it has put significant resources in clearing vegetation along its tracks and even has its own fleet of pop cars and a helicopter to put out fires. To help with the smoke, in the mid-2000s, the D&SNG installed scrubbers to reduce the ash emitted from running the engines at night.

The situation improved only slightly, however. For many, the train needed to transition from burning coal to a cleaner fuel, such as oil or diesel, which both emit less pollution and hold a lesser risk of starting a wildfire. But for years, D&SNG owner Al Harper maintained the train would never veer from tradition.

These calls for a cleaner future, however, were taken to new heights after the 416 Fire in 2018 burned more than 54,000 acres north of Durango, putting homes at risk, forcing evacuations and causing drastic economic losses. Just months after the fire, mudslides off the burn scar also damaged homes and caused a near total fish kill in the Animas River. From the outset, witnesses said the fire started just after a D&SNG locomotive passed by, and those suspicions were confirmed a year later when investigators pinned the blaze on the train.

Though the D&SNG denies it’s responsible, the fire forced Harper’s hand to rethink the train’s future. Ultimately, he vowed to never be shut down again by wildfire risk and committed to revamping his fleet with oil and diesel engines. And it appears the D&SNG has made good on its promise.

“I’m proud we were able to deliver on the timeline we planned,” Johnson said. “It’s an incredible stress reliever for all of us to have oil and diesel engines available.”

It took just one year to carve and blast through the steep granite walls of the Animas River Canyon to complete the rail line from Durango to Silverton in 1882. Though its primary purpose was to serve as a lifeline to the hundreds of mines that pocked the San Juan Mountains around Silverton, even in the early days, the train catered to tourists.

As the mining industry waned, and highways took over as the main route of travel, tourism on the D&SNG gained a stronger economic foothold, especially after a number of Hollywood films featured the train in the 1950s and 1960s.

By the end of the century, the D&SNG had become Durango and Silverton’s top tourist draw. Today, in a normal year with full service, locomotives take nearly 200,000 4  people from Durango to the mountain town at an elevation of 9,318 feet. And while hard to pin down an exact number, best figures estimate the train has a $200 million impact on the local economy.

But the region’s relationship with the train hasn’t been without its complications. And among the biggest concerns is wildfire risk – coal-fired engines are infamous for starting wildfires, a result of hot cinders emitted from smoke stacks. The U.S. Forest Service a few years ago released a report that said from 1994-2013, the D&SNG started nearly 20 fires on public lands, costing about $1.2 million in fire-fighting costs. Ultimately, through legal battles, the D&SNG ended up paying only about half that amount.

For the 416 Fire, the Forest Service has sued the train to recover the $25 million or so it spent to put the fire out. It should be noted, however, the D&SNG is actively challenging the allegations in court. The trial was recently rescheduled for March 2022.

Regardless, the losses incurred from the 416 Fire, and the very real probability of future drought years, prompted the D&SNG to make a full-scale, $7 million push to convert some of its fleet to oil and diesel.

No coal, no problem

Not a single fire has been reported this season, Johnson said, even as the region is in an extreme drought. The main reason is oil and diesel engines burn liquid, which vaporizes when ignited, rather than coal, a solid material that sends off embers when burned.

Part of the train’s hesitation all these years to transition to cleaner fuels was that it would lose riders drawn to the historical allure and nostalgia of burning coal. But that fear has proven unfounded.

“We rarely see anyone complain about it,” said D&SNG’s Johnson. “Most people understand the reason why we moved in the direction we have. And we’re generally filling every seat we can offer right now.”

Rob Arey, director of marketing for the Mount Washington COG Railway, said as the popular scenic railroad in New Hampshire went through a similar conversion, the same fears of losing ridership were brandished. But in the end, adding locomotives that run on biodiesel allowed for more daily trips, increasing visitation, while at the same time, having less environmental impact.

“Our railroad is built on innovation,” Arey said. “We may even see electric engines down the road.”

Most riders would be hard-pressed to even know the difference between a train running on coal or oil, Harper, too, has said previously. Both locomotives puff out steam, chug along the tracks and sound whistles through town. And above all, customers are still offered the same stunning views of the San Juan Mountains.

Johnson said coal-fired engines won’t be completely taken out of service, however. If conditions allow, and fire risk is low, it’s possible the D&SNG will fire them back up for some trips, likely during the shoulder seasons.

For residents living near the train depot, the move to cleaner fuel is also being celebrated. Coal boilers need to stay hot and require engines to run all night, which causes a plume of smoke to cover parts of town. As a result, it’s not uncommon to wake up with red eyes and a sore throat, or for windows, laundry and even plants in the garden to turn black with a layer of soot.

The D&SNG in the mid-2000s invested more than $1 million to try to fix the issue, with little success, said Nathan Morris, who lives on the south side of Durango. All these years, Morris said the underlying hope was the train would convert to cleaner energy, but he held little optimism.

“I did not think it would happen this way,” he said. “It took a perfect storm of the 416 Fire, massive lawsuits, millions lost to the community, climate change – major forces.”

Morris and his neighbors set up an air quality monitor near Second Street and Fifth Avenue, which he said shows clear spikes to air quality in the mornings because of the train, even with oil and diesel engines. Long-term, he’d like to see the train use even cleaner fuel, such as biodiesel, like the Mount Washington railway. But for now, he’ll take the mostly clear mornings.

“I want to give praise to the train where praise is due,” he said. “I wish they did this 20 years ago, but I’m glad they’ve spent the money and put the effort in to make the changes they have.”

Rolling into the future

Finally, after wildfires, wash outs on the tracks and the COVID-19 pandemic, Johnson said the D&SNG is returning to a sense of normalcy. “There seems to be a lot of pent-up demand,” he said. “It’s as good as or better than we could have predicted.”

DeAnne Gallegos, director of the Silverton Area Chamber of Commerce, said the mere sight of the arriving train is a morale boost for residents, given the D&SNG was unable to make it to Silverton because of the pandemic last year, the first time in the train’s history it did not make trips to town during the summer season.

“And we’re seeing that difference within our community, not being worried about the train not being able to run during drought conditions,” she said.

True, having the D&SNG not at risk of shutting down every time there’s a drought, seemingly a yearly occurrence these days, also provides economic security for the towns of Durango and Silverton, said Jack Llewellyn, director of the Durango Chamber of Commerce.

“If you don’t adapt and change with the times, you can go out of business,” he said. “And the train has done an incredible job modifying their fleet.”