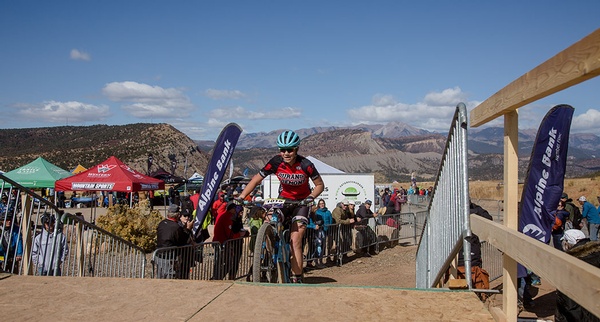 A Durango High School rider crests an overpass at a recent state mountain bike championship, which were held at Durango Mesa Park. Plans call to build a bike park on the land, which is adjacent to Horse Gulch. Till then, owners ask that you kindly resist the urge to ride over there./ Courtesy photo

You might drive or bike by it every day without realizing that, atop a hidden mesa on the southeast outskirts of Durango lies a future home of world-class mountain biking, outdoor concerts and a new fairgrounds.

Get excited, but not impatient, as the project, known as Durango Mesa Park, is going to require a herculean effort that will take years to come to fruition. Already, for almost a decade now, organizers have worked behind the scenes to get this incredibly complex and costly project under way.

“It’s going to be a significant game changer, not only for the city, but also the county,” Moira Compton, executive director of the Durango Mesa Park Foundation, which is leading the charge in organizing the project, said.

Just east of Highway 3, the 1,850-acre parcel sits on a mesa about 300 feet above the city of Durango. For those lucky enough to have been up there with permission, the location offers stunning views of the San Juan Mountains (but don’t get any ideas! The land is still private).

But more than anything, the property – formerly known as Ewing Mesa, now known as Durango Mesa Park – offers a blank slate for the community to dream big. Larger visions have since been narrowed down to three major developments: a mountain bike park, outdoor venue and fairgrounds.

Of course, it’s going to be a slow roll, with all the challenges that come with a massive project – such as infrastructure and navigating land-use regulations. And, the big one, funding.

“We have good momentum going in 2022 that will lead – and I’m crossing my fingers here – to the start of construction (of the mountain bike park piece) in 2023,” Compton said.

Ewing Mesa was originally owned by Texas businessman W. Dudley Ewing, who moved to Durango in 1923. The relatively undeveloped area, mostly used for grazing, was sold in 1990 to Oak Ridge Energy, a company out of Wichita Fall, Texas, owned by Noel Pautsky and his daughter, Sandra.

For decades, the spot was prized for its development potential in the topographically constrained City of Durango. In 2004, for instance, one plan called for thousands of residential units, a business park and even multiple golf courses. But that plan never materialized. Instead, in 2015, local philanthropist Marc Katz purchased the mesa with the intent of donating most of the land to the City of Durango and La Plata County. (Katz was co-founder of Mercury Payments Systems, now Worldpay).

The idea? To make something awesome for the community.

“It’s really an exciting and exceptional project,” Mike Segrest, La Plata County’s deputy manager, said. “It’s an incredible piece of property, and to be able to create this tremendous amenity for our community, I think is amazing.”

After Katz bought the land came the fun part – dreaming up what to put on it. And, as it stands, those visions have been whittled down to the three aforementioned uses: a mountain bike park, outdoor venue and new fairgrounds.

The mountain bike park will likely be the first component built. Spearheaded by the city and the foundation, the master plan for the park is still being finalized but is expected to include new trails, a BMX track for national events and connections to trails in Horse Gulch.

La Plata County, too, has been hard at work to construct a new fairgrounds (the current one at 2500 Main Ave. is much outdated, officials say). A plan calls for it to include indoor and outdoor arenas, livestock barns, a show arena, a community barn and exhibit hall, as well as administrative buildings.

“If everything goes really well, we might begin initial construction next year,” Segrest said. “And then it’s probably a two- to three-year construction project after that.”

And lastly, the outdoor venue. This is likely to be the last component of the project. But once complete, the venue could accommodate any number of festivals, all with the stunning backdrop of the San Juans (in the short term, the area can handle smaller events, as has been done with Meltdown on the Mesa in the past).

However, as with any project of this size, huge obstacles remain with the cost of construction, infrastructure access and funding. Take a sip of coffee; here we go.

Because Durango Mesa Park is relatively undeveloped and at a higher elevation than the city, getting water and sewer to the property is going to be costly, to say the least. Compton said potential solutions are still being worked out.

On a positive note, the site already has electricity, and Compton did say a necessary second emergency access road is close to being resolved. Currently, there’s only one way up or down off Highway 3, but organizers are confident they can secure a second road farther south.

“That’s not necessarily exciting, but it is extremely valuable,” Compton said.

As for funding sources, that’s a complex mix that includes the City of Durango, La Plata County and private sources. Nearly all money to-date has come from funding sources that are dedicated to open space or outdoor projects. La Plata County, for its part, has put $5 million toward the fairgrounds from its conservation trust.

Last summer, the City of Durango purchased 270 acres from the foundation for $1.5 million, money that will be earmarked for things like traffic studies. And, the city has set aside $4 million over the next three years to develop infrastructure as well as some trails – money that will come from the City’s half-cent sales tax dedicated to open space.

So far, no major construction has taken place on the site. Durango Mesa Park will be implemented in phases, with funding dictating the pace of growth. All told, however, the entire project over decades could cost up to $150 million. But, unfortunately, that doesn’t take into account price increases from inflation and supply chain issues, Ture Nycum, the city’s Parks & Rec director, said.

“Things are not getting cheaper,” Nycum said. “So we’re trying to balance the resources we have with the cost.”

Think about any past project that has been transformative for Durango – the Hermosa Creek Special Management Area, Animas River Trail, Horse Gulch and Lake Nighthorse. These projects took years, decades even, to pull off, with countless community members working behind the scenes.

Now, years later, these are a beloved part of everyday life, and, daresay, sometimes even taken for granted by folks, who forget the incredible work and effort that went into them. Well, apply that logic to Durango Mesa Park, which is right now in that tedious, grinding, planning stage.

“A big part of our planning process is figuring out the best way to do it,” Nycum said. “Because we don’t want to build something and realize years down the road we didn’t do it the best we possibly could.”

Indeed, planners have taken great care to offer something for everyone – a fairgrounds for the ag crowd, mountain bike trails for … mountain bikers, and an outdoor venue for music lovers. “That was vital to the success of the project,” Compton said. “That it’s all encompassing.”

So hang tight. Enjoy events when they do happen (like mountain bike competitions and one-off concerts). Don’t go up there unauthorized. And maybe join an advisory board, so you can have your name on a plaque near the stage at a concert, perhaps the Rolling Stones when Mick Jagger and Keith Richards are approaching the century mark. 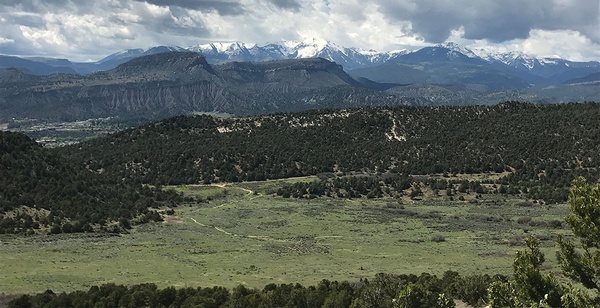 The expansive views of the San Juans from Durango – formerly Ewing – Mesa. Plans call to develop the 1,850-acre property into mountain bike trails, an outdoor concert venue and a new fairgrounds, but the devil is in the details./ Photo by Missy Votel