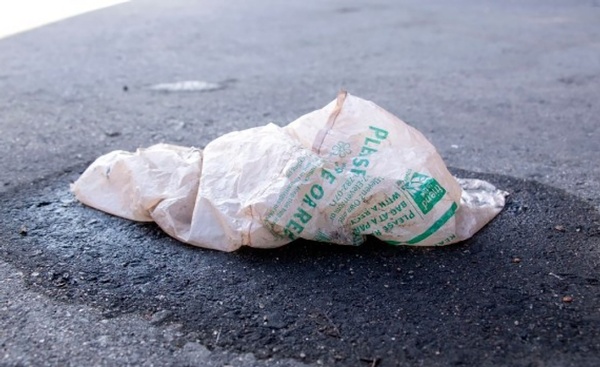 The eventual and inevitable end of life for most single-use plastic bags.

"Has anyone on this Zoom call actually touched one of these bags?" Councilor Amy Phillips asked at an Avon Town Council meeting last month.

"I did," Councilor Russell Andrade responded. "My first impression was that it definitely felt like a disposable, one-use bag."

Avon banned plastic bags in 2018 from all retailers, with the purpose to protect the public health, safety and welfare from pollution related to plastic bags. Many Colorado mountain towns have adopted similar laws to keep them out of rivers, trees, landfills and recycling centers – the bags jam up machinery.

So the local Avon Walmart recently approached the town with a question: can we give customers free plastic bags again, if they're thicker and thus meet the law’s definition of reusable?

Walmart officials say the bag is washable, can be reused more than 100 times and is about 2.25 mils thick. That means it qualifies as reusable under Avon’s plastic bag ban.

But even if Walmart were to be following the law technically, the majority of Avon Council members agreed the move would go against the intent of the town’s ordinance. In response, the Town Council plans to tighten up its plastic bag ban ordinance.

“If it feels disposable, it’s going to end up as stuff blowing up and down the train tracks again and in the river,” Phillips said.

Town attorney Paul Wisor said in the meeting that Walmart had found a “workaround” for Colorado communities that have adopted plastic bag ordinances.

“There’s nothing that prevents us from saying, ‘Look, our point still stands. We don’t want this being thrown away, which clearly it will be.’ So we can change our standards,” Wisor said.

Walmart did not respond to CPR News' interview request. The company has attempted to or already has introduced these plastic bags in other Colorado mountain towns with laws in place to reduce their use.

"It's definitely a wolf in sheep's clothing," councilor Chico Thuon said during Avon’s council meeting. "If you want to reverse (the bag ban) really quickly, you'll allow these bags to go on to the street. And they will be literally on the street."

Thuon agreed with the suggestion that the town should re-word its rules to close what it considered a "loophole." The town attorney and staff will amend the language to prevent the new bags and bring the changes to Town Council.

Meanwhile, other mountain towns are also considering amending language in their plastic bag laws to block the workaround.

Instead of a plastic bag ban, Frisco adopted a 25-cent bag fee in 2019 on both paper and plastic disposable bags. Environmental Programs Coordinator Gilly Plog said “it was a bit of a dismay to see how much that bag fee was generating in revenue for the town.”

The fee allowed the town to track just how many plastic bags were being used.

"We're still seeing over a million bags in Frisco go out the door (annually) for a town that's only 3,000 people," Frisco Mayor Pro Tem Jessica Burley said. "That was shocking to our council."

In response, the council passed a total ban on disposable plastic bags earlier this year that will go into effect in September.

To keep Walmart and other stores from giving away sturdier, reusable plastic bags, Frisco's new ordinance won't make exemptions for bags that are of a certain thickness.

"We immediately skipped that because we viewed that as a loophole," Burley said. "And there were a lot of businesses, not just Walmart, who were looking to continue the use of plastic bags by going to a thicker bag."

Instead, their definition of a reusable plastic bag is one made from woven polypropylene, like the ones that are for sale.

Burley is also the sustainability coordinator for Breckenridge. Businesses there are allowed to apply for an exemption to the town’s bag fee if their bags are 2.25 millimeters thick.

"There were about 50 to 60 businesses in Breckenridge that had applied for that exemption over the years," Burley said. "Without singling anybody out, that's quite a handful of businesses that just kind of went with the thicker bag to avoid having to collect and remit that fee on behalf of their customers."

Breckenridge will also move to the thicker bag ban this September and will no longer have exemptions for them.