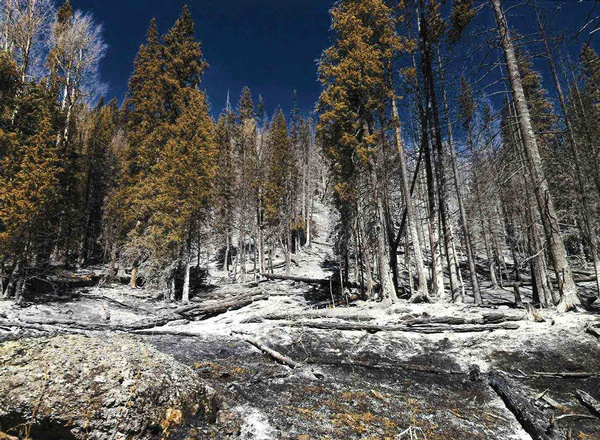 The Ice Fire broke out October 2020 and went onto burn 600 acres in the San Juan National Forest. Federal investigators, however, were unable to determine what started the fire, although the running theory is someone hiking the Ice Lakes Trail threw a lit cigarette butt off into the forest, igniting the blaze. / Photo courtesy U.S. Forest Service

After a lengthy investigation, federal law enforcement was unable to find out what started a wildfire near the popular Ice Lakes Trail west of Silverton last fall, though it’s believed to be human caused.

According to a final report – obtained by The Durango Telegraph through a Freedom of Information Act request – investigators scoured the burn scar in the days after the fire but were unable to find an ignition source.

“The specific area of origin was determined, but no evidence was found during the investigation indicating what exactly caused the fire,” Shawn A. Cave, the lead investigator for the U.S. Forest Service, wrote in the report.

The “Ice Fire” broke out on the afternoon of Oct. 19, 2020, about a half mile up the highly trafficked Ice Lakes Trail, 6 miles from Silverton along South Mineral Road. It wasn’t until Oct. 26, when a winter storm hit the region, that the fire was considered fully contained after burning nearly 600 acres of national forest.

No one was injured and no structures lost, but the fire did trap 28 hikers who had to be evacuated by helicopter, and cost about $750,000 to fight. The blaze also ran the risk of coming into Silverton and threatened the town’s water supply. And, ultimately, because of the damage to the forest, the Ice Lakes Trail was shut down indefinitely.

Though no exact cause was determined, federal investigators believe the Ice Fire was started by a person, and according to the investigation report, the leading theory is a cast-off cigarette butt.

“The only probable factor as to contributing to the start of the fire is human in nature,” Cave wrote. “However, no evidence or conclusive evidence was found in the point of origin. Therefore, the cause of the Ice Fire is inconclusive.”

Pinning a point of origin

Around 11:30 a.m. Oct. 19, passing hikers reportedly saw the smoldering beginnings of the fire and tried to put it out by hand. But the burn quickly grew out of control, and realizing their efforts were not going to work, the hikers rushed down to call emergency dispatch, with the first call coming in at 1:13 p.m.

In October 2020, the San Juan Mountains were in an extreme drought after a no-show monsoon season and a continuing dry pattern into the fall. All over Colorado, destructive wildfires were breaking out at historic rates. On the day the Ice Fire started, windy conditions caused it to spread rapidly, inciting a hefty emergency response that included nearly 100 firefighters and aircrew members.

Part of that response was the Forest Service’s fire investigation team, namely Cave, who has worked as a law enforcement officer in Southwest Colorado since fall 2011. But, because of fire danger, steep terrain and falling trees, the area wasn’t safe to enter on the day the fire first flared up, the report said.

Instead, investigators talked to witnesses who said they saw columns of smoke first billow up about a half-mile from the trailhead, near a boulder within a meadow. An emergency helicopter crew that flew over the area just an hour after the first call to dispatch confirmed these accounts of the fire’s point of origin.

On Oct. 23, 2020, as the Ice Fire slowed down (having burned nearly 600 acres but still only 50% contained), it was determined the area where the fire was believed to have started was safe enough for investigators to begin surveying.

Once on scene, the starting point was easily identifiable after investigators spotted a wide “V” pattern on the forest floor, indicating where the blaze broke out and then spread, which was consistent with eyewitness accounts and wind directions Oct. 19.

“I could see how the fire was able to burn toward the treeline,” Cave wrote in the report. “From the treeline, I was able to see how it established itself into the timber and became a crowning fire.”

Missing from the scene, however, was any indication of what started the fire. So, investigators started to rule out possible causes.

No storms or weather activity were happening at the time, so lightning was eliminated. Investigators didn’t find any signs of a camp or campfire nearby. And, there no roads in the immediate vicinity where a spark from a car or other motorized vehicle could have caused it.

Instead, the more logical conclusion, held by many local emergency crews from the outset, was that one of the hundreds of  people a day who make the hike on the Ice Lakes Trail was the culprit. Giving favor to this theory was the fact the point of origin for the fire was close to the trail itself, about 75 feet off, and at a “good rest stop” for hikers, according to the report.

“Natural elements … were ruled out as well as mechanical elements such as a motorized trail (or) road,” Cave wrote. “Though no cigarette butts could be found at the specific origin, this is the leading theory.”

Fire investigations can be incredibly difficult, as active wildfires, weather and other factors can delay or diminish the quality of evidence on the scene.

A Forest Service spokeswoman Wednesday was unable to answer why investigators think it was a cigarette. No potential suspects are listed in the report, either. Still, the investigation report confirms what locals on the ground believed for months.

“Just by ruling out things, it was almost certainly human caused,” Jim Donovan, director of San Juan County’s Office of Emergency Management, said. “There weren’t any other factors at play during the day.”

The Ice Lakes Trail is one of the most popular and heavily used in Southwest Colorado. Located within the San Juan National Forest, the trail starts at an elevation of 9,840 feet and climbs a couple thousand feet to two stunning, turquoise alpine lakes: Ice Lake and Island Lake.

On any given day in summer, hundreds of people make the 7-mile round-trip hike. But in recent years, social media (looking at you, Instagram) and countless “best of” lists have blown up use on the trail. Then, with COVID-19 pushing more people into the outdoors, the trailhead and parking lot started to feel more like Disney World than a gateway to the great outdoors. It was common last year to see 400 to 600 hikers a day (pre-pandemic, it was 250 hikers a day). One count over Labor Day weekend 2020 saw nearly 2,000 hikers and 215 overnight backpackers.

All that use took a significant toll on the fragile alpine tundra. People were regularly seen going off trail, damaging vegetation, starting illegal campfires above treeline and leaving behind litter and human waste. The other big concern, of course, was the risk of wildfire.

Countless studies have shown more than 90% of wildland fires in the U.S. are caused by people, whether through unattended fires, sparks from motorized vehicles, fireworks, intentional acts of arson and yes, the flick of a cigarette butt. According to federal data, in 2020, humans started a staggering 53,563 wildfires – 91% of all wildfires – burning nearly 6 million acres.

One of the more peculiar aspects about the Ice Fire, however, was how late in the year it started and how high in elevation it burned (10,000-11,500 feet). The blaze also shot a message to the high-elevation town of Silverton that it was not immune to wildfire. The last major fire near Silverton was in 1879, when 26,000 acres of forest burned around Molas Pass.

“It was definitely a wake-up call, as far as the fire threat to town,” Donovan said. “We didn’t think it was going to be that much of a concern, but it definitely turned into that.”

While the fire did not impact Ice Lake or Island Lake, the trail itself was heavily damaged and now presents risks of falling trees, rock slides and flooding. As a result, the trail, as well as several adjacent roads and campgrounds, will be closed until at least September when Forest Service crews can reassess conditions after the monsoon season.

“People are just going around the sign,” Conrad said. “People are constantly out there and think it’s great no one else is out there. People don’t understand we’re not closing it to be (another term for jerks). There’s reasoning behind it. They’re endangering themselves and the people that come after them.”

Conrad said his deputies give a warning to first-time offenders and tickets to people if caught in the area a second time. As of Tuesday, one person has been ticketed. According to the Forest Service, fines can run up to $5,000. Lorena Williams, a Forest Service spokeswoman, said the agency has also increased law enforcement and volunteer presence in the area, too.

And those aren’t the only changes coming for one of Southwest Colorado’s crown jewel hikes. A permit system, long in the talks, moved closer to reality last year after the incredible increase of use on the trail and subsequent deteriorating landscape, culminating in the fire.

“The SJNF is weighing all options for management of the Ice Lakes Trail, and a permit system is just one of those possible options,” Williams said. “We have completed some initial research and continue to gather information about all options.”

For Conrad and many Silverton locals, something’s got to change.

“That area has been under such pressure from over-use, it’s good to give the area and wildlife some reprieve while USFS contemplates how to better manage it,” Conrad said. “But it is closed for public safety purposes and people back there will be charged.” ?