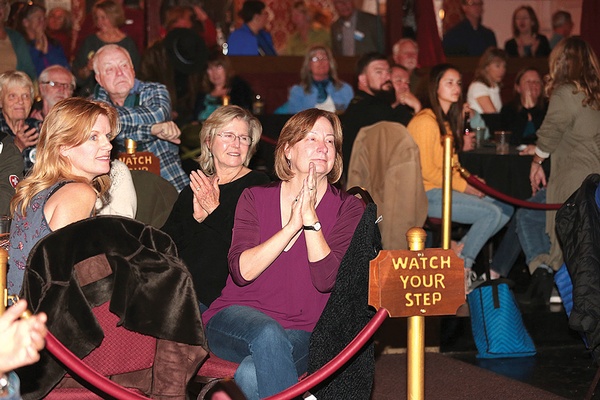 Residents watch the election results come in at the La Plata County Democratic Watch Party at the Henry Strater Theatre on Tuesday night./Photo by Jennaye Derge

There’s a lot to take in from yesterday’s election – like power shifts and political ripples – but what will likely impact residents in Durango and La Plata the most is the failure of three tax increases to pass.

None of these measures really even came close to passing. Some think Colorado voters aren’t typically on board with tax increases, and others suggested there was just too much on the ballot – including state and local races, 13 ballot measures, 11 possible questions for La Plata County residents, and a handful of judges.

The money matters the most, though, for city and county officials – both of which are expected to be struggling for funds in 2019 and beyond.

It’s no secret La Plata County has been on its back foot for years, dealing with the impacts of declining oil and gas revenues. The city, however, came out earlier this year and warned residents of what officials called their “wicked problem. “

A wicked problem is one that cannot necessarily be solved and is typically about making tough trade-offs. For the city, the wicked problem on the horizon is finding a way to keep providing basic services residents have come to expect without taxing them out of the community.

Durango officials hosted more than 50 meetings and received thousands of survey responses and comments from residents over the past several months. In the end, they said respondents wanted to keep things as they were. So, the City Council crafted Question 2A – a combination of property tax and sales tax increases – to fund those services.

Tuesday, the public voted the measure down 61 to 39 percent.

If Question 2A had passed, City Manager Ron LeBlanc said city staff would have gone to the Council and asked about adding some street projects to the 2019 budget. City officials also would have started the search for a new home for the Police Department.

Instead, the city moves forward with no changes to the proposed 2019 budget – including no funds for capital projects, no new programs and no new staff. It also means the search for a new home for the Durango Police Department is on hold, and the wicked problem remains.

LeBlanc said he, obviously, had hoped for a more positive outcome but he’s not entirely surprised by Tuesday’s results. “It’s not unusual to see the first attempt is not successful,” LeBlanc said. “Some of the major issues Durango has attempted in the past were not successful on the first vote.” Both the Durango Rec Center and Florida Road projects were voted down initially, he added. The City Council can come back to voters with another proposal as soon as April or November of next year.

“I think it might be helpful for the Council to have a couple listening sessions to get feedback and see what people were thinking,” he said.

Ultimately, it’s up to the City Council to decide whether or not to return to voters in the future, and what direction they’ll take moving forward. LeBlanc said they’ll discuss their next steps at the study session next Tuesday. City staff will also present council with 40 different projects on the to-do list and ask for feedback on how they’d like to prioritize those projects.

The city’s Question 2A wasn’t the only tax measure to go down Tuesday. In fact, they all failed to get voter approval.

Amendment 73 (funding for public schools) was defeated 55 to 45 percent. The measure would have changed income tax rates, raising the rate for higher earners, and adjusted the property tax rate – all of which was to go to education. The Durango 9-R School District would have taken in an additional $8 million in the first year alone.

Colorado residents also voted against the other tax question on the ballot, Proposition 110 (transportation taxes and bonds). This would have raised sales taxes to pay for road projects across the state, including bringing additional funds to Durango and La Plata County for multimodal projects, as well as road repair and maintenance. It was defeated 60 to 40 percent.

She said it was unfortunate the measure didn’t pass, but it also doesn’t change things for the county. “We play the hand that we were dealt,” Graham added. “It doesn’t change what we have going forward.”

Unlike the city, the 2019 budget for La Plata County does include a few capital improvement projects – including remodeling county buildings and other infrastructure needs. Officials had planned on a flat year for 2018, according to Graham, but with a slight increase in natural gas prices and sales tax revenues, the county came out ahead.

It’s not expected to last, but it puts the county in a better-than-expected position heading into 2019 – in spite of losing some funding help Tuesday.

“I think that Colorado voters tend to have trepidation voting for tax increases,” Graham said. “I don’t know if it’s altogether surprising or shocking.”

The only high-profile measures to pass were Amendments Y and Z (congressional and legislative redistricting), which passed 71 to 29 percent. Those amendments will create commissions tasked with drawing the maps for state legislative and congressional districts in future elections.

Both county and city officials were also keeping a close eye on Amendment 74 (compensation for property owners) and Proposition 112 (increased setbacks).

Neither one was supported by elected leaders in the county or city. The Board of County Commissioners took official positions against both ballot measures in October.

“I think the fact that 74 and 112 went down is a really good thing for La Plata County,” Graham explained.

She said under Amendment 74, the county could have been roiled in costly litigations – a sentiment echoed by LeBlanc. With Proposition 112, Graham added, it just didn’t seem to fit the oil and gas development in this community.

Moving forward, both city and county officials will be faced with tough questions – even wicked problems – when it comes to budgets and the bottom line.

La Plata County rocks the vote with record turn out 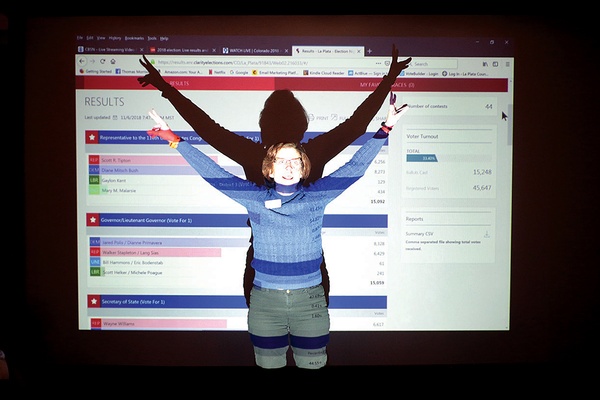 La Plata County Clerk and Recorder Tiffany Parker – who ran uncontested for another term – said Tuesday’s election was the highest turnout for a midterm ever, even surpassing 2010 numbers.

“I can’t imagine we had a better turnout before; it was incredible,” Parker said. “It was a huge day for us.”

La Plata County also had one of the top turnout rates in the state. Parker said she was hoping for 60-64 percent voter turnout, and that’s exactly what she got.

La Plata County turnout was more than 62 percent, outpacing the state level of just over 50 percent.

One glitch in Tuesday’s election was some intermittent internet issues at the county’s three polling places. But, Parker said, voters were patient through it all.

“People were very understanding,” she added. “I was really impressed.”

Parker attributes some of the high turnout numbers to mail-in ballots, which make it easier for residents to take their time with the issues – especially with this year’s ballot. It included several complex state and local issues, as well as national, state and local races.

Another reason for the high turnout is likely how easy the state makes it for residents to register. Voters can register in-person, online or on social media – they can even text in their registration.

“It was a huge day for us,” Parker said of the turnout. “We were really excited.”