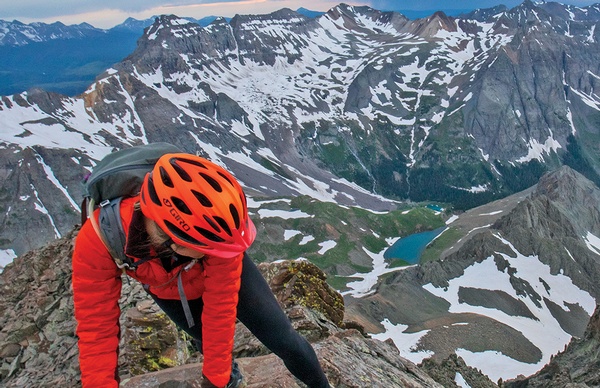 A hiker nears the summit of Mount Sneffels in 2019. The size of the wilderness area, north of Durango, would double under Sen. Michael Bennet's CORE Act. The bill passed the House last October and Bennet is hoping to attach it to Sen. Cory Gardner's land bill, which would give it a long-overdue hearing in coming weeks./File photo

Four-hundred-thousand acres of Colorado public lands, including some of Southwest Colorado’s most cherished landscapes, may finally see the light of day.

Earlier this week, Sen. Michael Bennet, D-Colo., filed to have his Colorado Outdoor Recreation and Economy, or CORE Act, added as an amendment to fellow Colorado Sen. Cory Gardner’s “Great American Outdoors Act.” The U.S. Senate is expected to debate and vote on the historic public lands bill over the next couple of weeks.

Gardner’s bipartisan bill, of which Bennet is a co-sponsor, would permanently and fully fund the Land and Water Conservation Fund and provide money for the maintenance backlog at the country’s national parks.

Bennet’s CORE Act, which passed the House last fall, includes the San Juan Mountains Wilderness Act, which would protect 60,000 acres of wild lands in Southwest Colorado. It includes protections for lands adjacent to the Lizard Head Wilderness Area, near Sunshine and Wilson peaks; the Sheep Mountain Recreation Area, which includes the popular Ice Lakes trail and basin; and a doubling of the Mount Sneffels Wilderness Area.

The CORE Act would also create wilderness, recreation and conservation areas along the Thompson Divide, near Carbondale; designate Camp Hale, near Leadville, as the first National Historic Landscape; establish a boundary for the Curecanti National Recreation Area near Gunnison; and prevent mineral development on 6,500 acres outside Norwood in Naturita Canyon.

The protections have been stalled in Congress for more than a decade, and Bennet said they deserve consideration.

“The Coloradans who wrote the CORE Act have worked tirelessly to protect public lands for future generations and preserve outdoor recreation, a vital part of our state’s economy,” Bennet said in a statement. “I am calling on my Senate colleagues to include the CORE Act in this public lands package, or to quickly pass the CORE Act on its own in the weeks ahead. It is past time for this long-standing Colorado priority to become law.”

The legislation passed the House without the support of Rep. Scott Tipton, R-Cortez, who argued it did not adequately incorporate feedback from the Western Slope communities. Last fall, Gardner echoed those concerns, saying while his support for the CORE Act is not out of the question, he wanted to see a host of changes to the bill, including strengthening language allowing grazing and the release of wilderness-study areas, though most are in counties or near lands the CORE Act affects.

But Bennet and fellow CORE Act sponsor Rep. Joe Neguse, D-Boulder, argue that the legislation is a result of a decade of discussions in Western Slope communities and the proposed changes would undermine that work.

“Ultimately, this bill does have the support of every single local jurisdiction that’s impacted directly,” Neguse said in a news conference after the House passed the CORE Act last October.

Other senators said they’re considering amendments to Gardner’s bill, as well, including one that would charge foreign visitors more to visit national parks and another that would lift the cap on oil and gas royalties paid to Gulf states.

However, Sen. Steve Daines, R-Montana, who’s shepherding the bill through with Gardner, said he doesn’t expect any amendments to be added onto the bill.

Missy Votel contributed to this story. For more from Colorado Public Radio, go to www.cpr.orgn