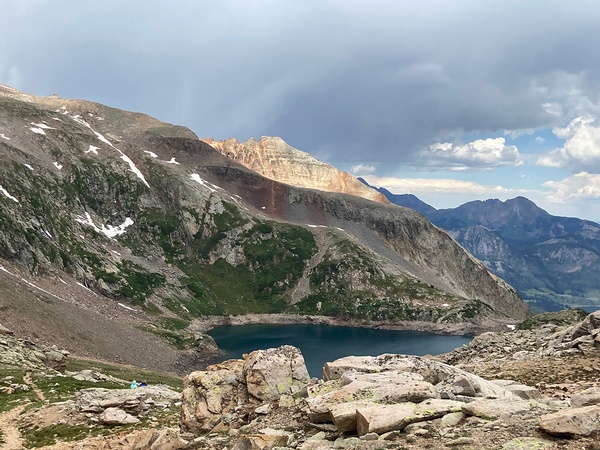 There's new hope for Hope Lake, seen here, with a Democratic-controlled Congress. The lake, along with 60,000 acres in and around the San Juans, would be protected if the long-languishing CORE Act passes. In all, the act would protect some 400,000 acres in Colorado./ File photo

This could be the year the Colorado Outdoor Recreation and Economy (CORE) Act becomes law – at least that’s what Rep. Joe Neguse, D-Calif., and Colorado Sens. Michael Bennet and John Hickenlooper are betting on, now that their party controls both chambers of Congress.

The three are reintroducing the Colorado public lands bill. It would  through new wilderness, recreation and conservation areas, including 60,000 acres in the San Juan Mountains, including the Ice Lakes, Mount Sneffels and Hope Lake landscapes. It would also establish new protections for historic Camp Hale, where the Tenth Mountain Division trained during World War Two.

“From a first-of-its-kind National Historic Landscape designation for Camp Hale – which embodies the spirit of Colorado – to protections for our iconic San Juan Mountains, the CORE Act was crafted night after night by Coloradans who came together to do something special for the next generation,” Bennet said. “Our state has waited long enough.”

Neguse also hit emphasized that the bill was not the brainchild of politicians in Washington, D.C., but “by Coloradans for Colorado.”

“Countless Coloradans have contributed their voices to the creation of this bill, and it’s time for Washington to take notice, and enact this measure into law,” Neguse said. “This year our coalition in Congress includes the support of both of Colorado’s Senators. I’m excited to get this done for the people of Colorado, for our public lands, our climate and our state’s economy.”

The bill has the backing of a number of local stakeholders from ranchers and farmers to mountain bikers and conservationists, many of whom have worked on the protections for over a decade through an evolving series of bills. It also has support from commissioners in every county with land in the bill.

The CORE Act passed the House during the 116th Congress, in October 2019, but stalled in the Republican-controlled Senate. Former Sen. Cory Gardner, R-Colo., who sat on the Energy and Natural Resources committee did not back it. He said it lacked the support of former Rep. Scott Tipton, whose Third District included the lands in the bill and who sought changes to it. The bill even got a veto warning from Trump.

The political calculus is different now. Democrats control both the Senate and the House, and both Colorado senators are actively pushing for CORE to pass. Conservation groups want to see it happen soon.

The group views this “long-anticipated” bill as a cornerstone of President Joe Biden’s effort to conserve 30 percent of U.S. land and water by 2030.

But, once again, the bill won’t have the support of the current congress member for the district where the lands would be protected, Rep. Lauren Boebert.

Last July, when CORE was attached to a defense bill, Boebert slammed it, calling it a “land grab.” While her office did not reply to emails requesting comment on the re-introduced legislation, she’s not listed as a co-sponsor of the bill.

When the measure passed the House in 2019, the Colorado congressional delegation split along party lines, with Democrats supporting the bill and Republicans voting against it, even though some of Tipton’s amendments were included.

The bill remains largely unchanged from when it was first introduced in 2019. But some small tweaks were made to reflect amendments accepted last session and input from local stakeholders. Those changes include a “sense of Congress” that the military’s HAATS training center in Eagle County is important, language confirming that grazing in the Thompson Divide would not be affected by new protections, and improvements to water rights language.

“I am hoping for the passage of the CORE Act,” said Bill Fales of Cold Mountain Ranch, in Carbondale. He uses land along the Thompson Divide for summer grazing. “It will bring needed protection to this area which is so important to myself and fellow ranchers and also for the entire community, who utilizes these amazing lands for hunting and year-round recreation.”

This story was edited to include locally relevant content. For more from Colorado Public Radio, go to: www.cpr.org.