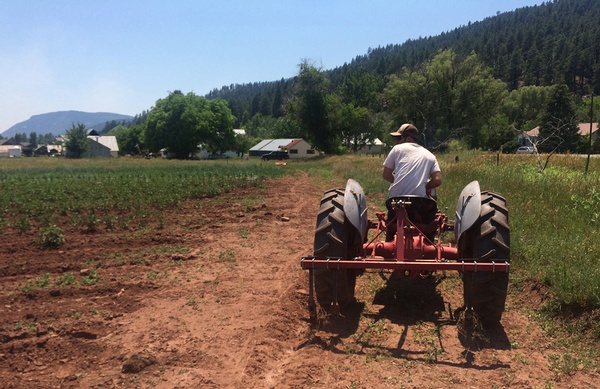 A farmer heads out into his field in the north Animas Valley. Under La Plata County's new draft land-use code, there will be a special "AgPlus" designation, which will expand uses on agricultural land without an extensive review process to encourage agricultural enterprises and activities./ File photo

Earlier this year, county commissioners released a retooled draft of the code for community review and input. Comments on the draft will be taken through June 26.

This newest version of the land use code picks up where things left off in 2017, when the update was scrapped due to controversy over several parts of the plan. When that plan came out, staff touted it as providing predictability for county residents; something lacking in the older plan.

But community members came away with a different perspective, lashing out at what they saw as inconsistencies and government overreach.

“What I think we should have done is spent more time in making sure the draft worked for our community,” then- County Manager Jason Meininger said. “We should have taken more time up front.”

County officials also attempted to update the code in the mid-2000s, but that plan also was mired in controversy and ultimately abandoned.

County staff hopes the third time’s the charm with the latest plan, which it believes addresses some of the previous plans’ shortcomings. The newest draft code incorporates community input and policy guidance over the past three years while working to bring the code into the 21st century, according to county staff.

Specifically, the new plan is meant to:
• Reconcile and clarify the land use code
• Provide predictability and improved certainty of land-use processes and outcomes
• Facilitate and direct growth to appropriate areas
• Improve the review process
• Articulate clear development standards
• Streamline the development process
• Protect and respect the county’s most valued assets
• Minimize sprawl
The plan also outlines a new set of tools to help achieve these goals such as:
• Economic Development Areas - A process that would apply specialized land use regulations to promote commercial, industrial or mixed residential/commercial development in areas nominated by the county or individuals
• AgPlus - A unique set of land-use permits offering a means to expand uses on agricultural land without an extensive review process so as to encourage, promote and foster agricultural enterprises and activities.
• Sketch plan review – A way to evaluate and discuss the basic design, concept and suitability of a project before the applicant spends time and money on a full application process. The sketch plan will move the compatibility analysis to the beginning of the review process, rather than at the end like it is under the existing code.
• Development standards - Clearly articulated development standards for a range of general and specific uses, giving applicants a concrete understanding of what will be required to gain approval for their project.

The new draft code was introduced via a series of Zoom workshops earlier this spring which can be viewed on the county website, www.co.laplata.co.us.

All comments received by June 26 will be taken into account for the second version of the draft land use code. Residents can comment many ways, including via the county’s website Comment Portal or e-mailing NewCode@co .laplata.co.us. They can also comment during the county commissioners’ formal adoption meeting.