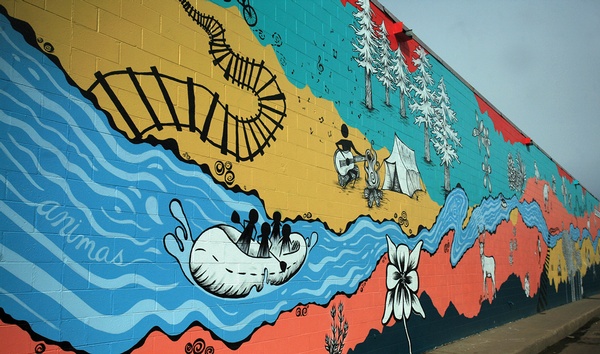 The mural on the back side of Kroegers Hardware in downtown Durango is one of the ways Local First has been supporting local creative projects. These kinds of artistic endeavors are highlighted by other districts across the state./Photo by Stephen Eginoire

The 416 Fire – which began June 1, 2018, and burned more than 55,000 acres north of Durango – revealed just how much the area depends on outdoor recreation and tourism to fuel the local economy.

But in the fire’s wake, local business leaders are rethinking this model.

“We don’t need to just rely on our tourists,” Kiki Hooton, program and membership director for Local First, said. “Durango has so many things to offer.”

In an effort to look at ways to diversify Durango’s economy and make it more resilient going forward, Local First is hosting a panel discussion at its annual membership meeting Thurs., Feb. 21, from 8:45-11 a.m. at the Durango Arts Center. The keynote presentation will be “Bouncing Back from the 416 Fire: Building a Strong and Diversified Economy.” The talk will feature a panel made up of representatives from the Durango Area Tourism Office, Business Improve District, City of Durango, local organizations, businesses and more.

Officials with Local First know there are other economic drivers of Durango’s economy because they’re tapping into a key resource already here – creativity.

The Creative Districts initiative is a statewide effort to highlight the unique quality of Colorado’s local creative communities, promote economic activity and attract visitors. Since it started in 2011, 21 creative districts have been created across the state, including in Mancos, Ridgway and Telluride.

Last summer, Local First began spearheading the efforts to create one in Durango. It started with the Creative District Steering Committee, which includes members from the City of Durango, Local First, Fort Lewis College and local businesses.

The first thing they tackled was coming together as a community and asking who wants to be involved, what the district logo might look like, who would manage the district, and what part of Durango would become the official Creative District.

Hooton and Hayley Kirkman, creative arts and special projects coordinator with Local First, said the map is one of the first things people want to know about the Creative District. The question they hear the most is, “What’s the boundary?”

The answer is, there isn’t one – at least not yet. One of the Creative District subcommittees, the Assets Committee, is focused on asking creative organizations, businesses and individuals to sign up to be a part of the district.

Once they’ve got everyone on a map, the creative hub of this area just might reveal itself.

Even after the map is created, it doesn’t mean creative endeavors outside the lines won’t be a part of the creative voice of Durango. Most districts throughout Colorado aren’t limited by the map. Instead the official district serves as a hub for the community’s outreach efforts.

And, each district is different. Some are spearheaded by local governments, others by nonprofits. Some include artisan products, like the coffee and chocolate; while others focus on theatrical productions or live music.

Local First and the other 17 groups spearheading the stakeholder process are trying to find out where the community thinks this area’s creative heart lies and what a Creative District means in Durango.

“We’re in a yearlong process of deciding those pieces,” Hooton said.

The process began last summer, and the goal is to get many of the organizational issues settled by the fall.

All the processes, promotions and applications are handled by Colorado Creative Industries, a state-run organization under the umbrella of the Colorado Office of Economic Development and International Trade.

Once the organization feels a community has completed the stakeholder process and is ready to move forward, it is invited to apply to become a Creative District. Officially becoming a district doesn’t just open the door to Colorado Creative Industries, it opens the door to being a part of the Creative District community across the state.

Other districts have already played an important role in getting things started in Durango. Hooton and Hayley Kirkman, creative arts and special projects coordinator with Local First, said people involved with the creative districts in Mancos and Ridgway attended the first meeting in Durango, sharing their experiences and insight.

Having the Creative District moniker also opens doors to grant funding, marketing opportunities and other benefits to help a community promote its creative voices and offerings.

Businesses and individuals in Durango and across the  Southwest certainly benefit from tourism, but many believe it’s not the only key to economic health.

Hooton said it’s a combination of looking at Durango’s other assets and working to keep dollars local, which is what Local First is all about.

“(We need to ask), what are other markets that we’re not filling?” Hooton said. “But also, how do we get locals spending their money here?”

Local First hosted two events last summer – the Let the Love Rain and Singles in Paradise campaigns – not only to raise funds for those affected by the 416 Fire, but also to get locals out in the community, spending money at local shops and supporting local businesses . It was neighbor helping neighbor that made the difference.

It was a reminder of how much it matters to keep it local. It was also a wake-up call that Durango needed to diversify its economy. This is where ideas like the creative districts come in.

“We already have so many creative people here,” Hooton said. “It’s really a marketing effort to bring people here, realize what talent is here and give a collective voice to that.”

The best way to get involved and stay informed with the Creative District initiative is to sign up for the newsletter at www.local-first.org/creativedistrict

Local First Annual meeting
What: Local First membership meeting with a presentation on “Bouncing Back From the 416 Fire: Building a Strong and Diversified Economy”
When: 8:45-11 a.m., Thurs., Feb. 21
Where: Durango Arts Center, 802 E. 2nd Ave. 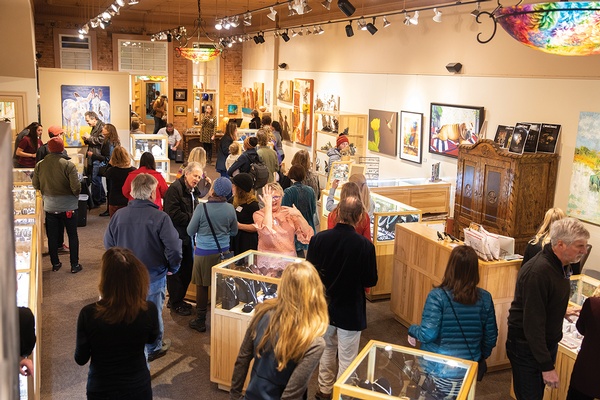 The goal – and challenge – of a Creative District is focusing all the unique and creative voices in Durango and framing those into a shared vision. The first step to framing that shared vision is reaching out to the community. Kiki Hooton, program and membership director for Local First, and Hayley Kirkman, creative arts and special projects coordinator, both said all the events and meetings associated with the Creative District initiative have been well attended. Most recently, the Creative Connection Hour hosted Feb. 6 (pictured right), drew about 50 attendees – and that was during a snowstorm that dropped 6 inches overnight. These Creative Connection Hours, which happen every other month, are opportunities for Durango’s creative voices to network, collaborate and share their stories. The next one happens April 3 at the Powerhouse Science Center. To keep up with the latest Creative District news and events, sign up for the newsletter at www.local-first.org/creativedistrict.