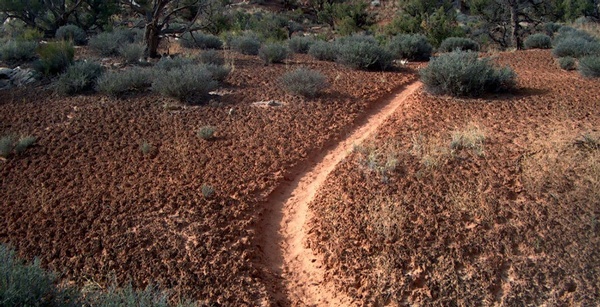 When I was a youngster and my family went to southeastern Utah, which we did often, we had a few immutable rules: Don’t pocket potshards or other artifacts, don’t throw rocks off the cliff if you don’t know who or what’s down below, and do whatever you can to avoid trampling the cryptobiotic crust.

We followed the first and third rules religiously. And I know I must be a curious sight as I do my cryptobiotic crust dance: zigzagging through the trees, tiptoeing along narrow game trails, ungainly jetéing from slickrock patch to slickrock patch.

The crust, a critical component of the desert ecosystem, is alive, and when crushed by a cow or person, it can take years or decades to recover. A new study in the Proceedings of the National Academy of Sciences finds that it’s not just cattle and people imperiling the crust, but also climate change.

At first glance, the crust looks just like, well, dirt. Bend down and look more closely, however, and you’ll see a miniature, living world – a symbiotic mingling of lichens, mosses, soils and cyanobacteria. Filaments bind together to form a sort of cap that, as renowned cryptobiotic researcher Jayne Belnap puts it, “holds the place in place.”

And when the crust is destroyed, it leaves the fine red desert earth vulnerable to erosion and winds. This can ultimately push an ecosystem across a critical tipping point, the authors of the study note. “Such tipping points ... make it extremely difficult or even impossible for an ecosystem to return to its original state.”

White settlers’ livestock trampled vast swaths of the stuff beginning in the mid- to late-1800s. Approximately 90% of the Colorado Plateau has been grazed by livestock since, according to the study. Hikers, OHVs, oil and gas, bulldozers, and invasive species have also taken a toll.

That makes it tough for researchers to find a patch of never-grazed grasslands to study. Luckily, one such place exists: Virginia Park in the Needles District of Canyonlands National Park. Ringed by cliffs, it was inaccessible even to Al “Mormon Cowboy” Scorup and his rugged livestock. After the park was established, land managers put it off limits to people, too, with the exception of permitted researchers.

Biocrusts in Virginia Park have been studied since 1967, and in the 1990s, researchers set up long-term monitoring sites. Authors found, unsurprisingly, that it’s getting warmer out there, with mean annual temperatures increasing at a rate of .27 degrees Celsius between 1967 and 2019, but there have not been similar “systemic patterns or directional changes” in annual precipitation across the same period.

As temperatures have warmed, the lichens in the crust have declined in both richness and the amount of ground covered. “Nitrogen-fixing lichen cover declined from 19% mean cover in 1967 and 1996, to 5% mean cover in 2019.” At the same time, mosses have increased.

More concerning, still, is that the lichens may not bounce back, even in the unlikely event that the climate starts cooling, the authors say: “For lichens (there was) an apparent tipping point around 2003, after which the population was unable to recover.”

Warming temperatures have thus reduced the lichen cover in Virginia Park to about 5% of total ground cover, making it similar to that of nearby areas that have been grazed and trampled by hikers, “potentially marking a shift in the ecosystem that may persist after the current drought abates.”

It’s yet another reason to stop burning fossil fuels, to reduce carbon emissions, and to slow or halt the warming trend. And it also makes the cryptobiotic crust avoidance dance more important than ever.

The Land Desk is a newsletter from Jonathan P. Thompson, author of River of Lost Souls, Behind the Slickrock Curtain, and Sagebrush Empire. To subscribe, go to: www.landdesk.org