Dazed and confused
As the first day looms, local teachers have concerns over 'Return to Learn' 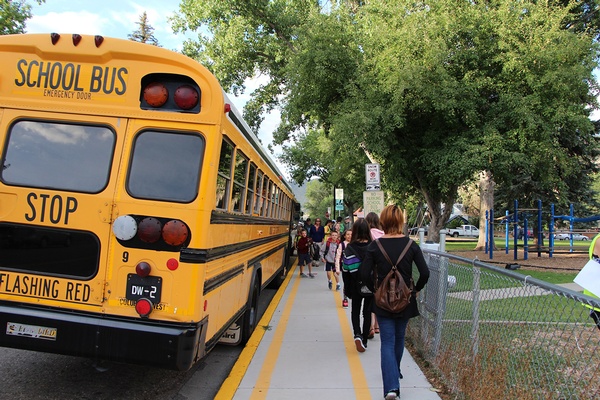 Students load and unload buses in the before times at Park Elementary School. 9-R schools open Aug. 31, but at some schools, students will arrive at staggered times to comply with social distancing. Buses will also be operating at half capacity with assigned seating (so no saving seats for friends). Although students were originally required to pre-certify they are not sick before boarding the bus, the district nixed that idea, something some teachers have taken issue with./ Photo courtesy School District 9-R.

There’s no doubt COVID-19 has given new meaning to first-day jitters, and students and parents aren’t the only ones feeling the unease of returning to school amidst a pandemic. As District 9-R plans to re-open for the 2020-21 school year Mon., Aug. 31, teachers are also feeling the strain.

On Aug. 18, the local teachers union, the Durango Education Association, delivered  (virtually) two petitions to the 9-R Board of Education. The first petition asked for more teacher input in the district’s “Return to Learn” plan while the second requested the ability for teachers to teach remotely from home in the instance schools are shut down. Currently, the district is requiring teachers to teach remotely from within the school buildings, except in the case of a total state-ordered shutdown.

The petitions were signed, respectively, by 167 and 217 of the union’s 263 members, which includes certified staff and teachers. The union represents about 75 percent of the district’s approximately 350 licensed staff members
“We are basically asking for teachers to be able to vote on the individual building plans for Return to Learn,” DEA leadership council member Teri Kopack said Tuesday. “I feel like the community should know teachers are concerned. We want to make sure we are included in the decision-making process since we are there for the day-to-day operations.”

According to Kopack, while some schools have channels for teachers to give input, others don’t, or only to a certain degree. “Staff has been asking since April to be included in the planning process, with varying levels of involvement across the district,” she said.

Teachers are requesting all school staff be able to vote on their individual schools’ return plans, with a 65 percent majority required for passage of the plan.

Right now, teachers have several concerns with the plans, Kopack said. For starters, she contends that since May, teachers were told by the district they would not be required to teach more than one of the three learning models being offered: in-person, remote and a hybrid of the two. However, many teachers are now being asked to teach more than one model. “We have concerns over the equity and efficacy of this,” Kopack said.
At this Tuesday’s school board Zoom meeting, teacher Shelli Moore said she and other teachers are feeling overwhelmed having to teach online and remote learners. Some teachers are even being asked to teach multiple grade levels, she said.
“The stress level at my school is really high,” she said. She added that had teachers been involved in crafting the three-model system, they would have told administrators it was going to be virtually impossible to staff and deliver. “I am feeling overwhelmed, scared and worried,” she said.

Kopack said teachers are also unhappy over having to monitor classrooms during lunch break. As per their “master agreement” contract, they are allowed a “duty-free” lunch. In addition, teachers have concerns about cleaning procedures, saying the 4 district-mandated cleaning solution, “Fantastico,” is not listed as an approved disinfectant by the Colorado Department of Education.

“I am really concerned that the cleaner doesn’t kill COVID in classrooms,” teacher Britney Armstrong told the board Tuesday.

However, 9-R Superintendent Dan Snowberger said classrooms will be disinfected nightly with an antiviral solution, once students have gone home. He said the disinfectant is not safe to use during the day when students are present, which is why teachers were given the other cleaner for daytime use.

Teachers also point out with learning models still being finalized, there isn’t enough time to upload students into their grading and attendance system, and they worry about the shift between learning models that might occur at the end of the quarter. They also note that high-risk staff have not received their PPE and objected to the district removal of the mandate that students self-certify they are not sick prior to boarding buses. “It’s not that we don’t want to teach,” Kopack said. “We just want it to be safe. Our highest priority is the students.”

At the Aug. 18 meeting, Snowberger said that as per the teachers’ contract, these sorts of informal grievances must go through a separate process at each school. However, Kopack argued that following the master agreement may not be possible under the new conditions.

“We know the administration is doing their best, but they’ve created a moving target,” she said.

As for the second petition regarding working remotely from home, Snowberger cited concerns from parents over the quality of remote learning last spring. He said teaching from the schools would allow for more consistency, accountability, collaboration and support among teachers.

“If teachers suddenly find themselves teaching another grade, where better to be than in the building, with people who have taught that grade?” he said. “I certainly don’t want a teacher like Shelli to be doing this by herself. Why not work together and share materials and ideas?”

He also noted teachers would be permitted to work from home on a case-by-case basis or if they are COVID positive but asymptomatic. And in the case of a total shutdown, everyone would work from home. “We expect at some point, the potential that we could find ourselves in a full remote setting,” he said.

However, Kopack said teachers should be able to make that decision on their own and not be mandated to stay in school after an outbreak. “We didn’t feel as if we were being respected or treated professionally,” she said. “We’ve asked to be able to give our input and work collaboratively on decisions being made, but we have no voice at the table.”

Kopack, who has been a teacher in the district, at Durango High School, since 2006, said she fears more teachers will leave the district if their concerns aren’t met. She said a month ago, at the DEA’s last board meeting, five teachers resigned, with at least three citing the “Return to Learn” plan as the reason. Many more requested extended leaves of absence.

On the upside, she did say the state-issued PPE has arrived at the high school, although she was unsure when other schools would receive theirs. In addition, teachers were thankful to the local community for stepping in to help out as well. Stone Age Tools handed out KN-95 masks to teachers this week and the Powerhouse donated 150 face shields.

Meanwhile, Snowberger has been in discussions with teachers on some of their grievances, but he noted there are some topics where the two parties “agree to disagree.” However, he held out optimism that once school starts, teachers will “hit a groove” and things will begin to smooth out. He also said the district will be releasing videos later this week for parents and students on cleaning protocols, new safety measures and what can be expected.
“We appreciate everything (teachers) are doing,” he said. “We are hopeful they will feel the support they need to be successful.”

For more on the “Return to Learn,” visit www.durangoschools.org.