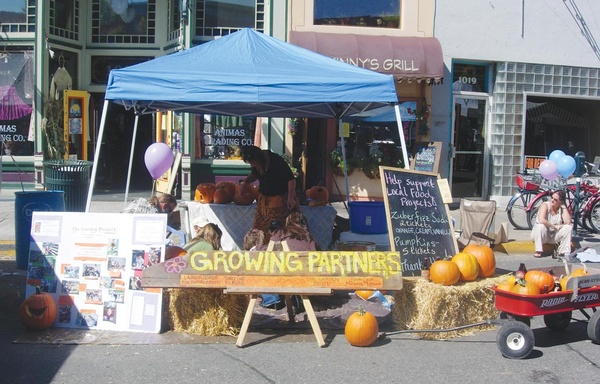 Food is about relationships. The seed to the soil, the people to the plate, the appetizer to the entré. Like a family sitting around the dinner table, it’s often the foundation on which strong relationships are built.

This time, however, it was the food that built the relationships – ones that will outlast the very group that helped them grow.

Growing Partners of the Southwest recently announced plans to close down after almost 15 years. The local non-profit first formed in 2004 with the goal of taking a good, long look at food production in Southwest Colorado.

Back then, no one was certain what resources the area had when it came to local food production and distribution, where the gaps were or how to close those gaps.

With grant funding from the U.S. Department of Agriculture, Growing Partners, a collaboration of local agencies and nonprofits, spent the next three years studying and cataloguing the local food system.
Katy Pepinsky, one of Growing Partners’ founding members and a former executive director, said even today the ground-breaking work is referenced. “To see how much it has inspired felt like a huge accomplishment,” she added.

Once the study of the local food system was complete, Growing Partners was able to focus on filling the gaps. They helped build community gardens, supported fruitgleaning efforts at harvest time, and created networking and educational conferences like the Homegrown Food Retreat. The coalition also hosted the Apple Days Festival, Tour de Farms and Iron Horse Chef Competition.

But one of their greatest successes, according to Pepinsky, is what is now known as the Southwest Farm Fresh Cooperative.

She said this coalition of local farmers and ranchers from across Southwest Colorado and Northwest New Mexico was born out of conversations and relationships built at events like the Homegrown Food Retreat.
Today, the cooperative is going strong and provides produce, meats and cheeses to restaurants in Durango, Cortez, Mancos, Rico and even Telluride. One of its most recent additions is Harvest Share, a community supported agriculture program in which residents can get local produce and other products throughout the summer and fall.

“As we step back and look at where we’ve come, where we’ve progressed, where our community has progressed ... it’s impressive,” CSU Extension Director Darrin Parmenter, an original member of Growing Partners, said. As the years passed, Parmenter began to see the focus of the food system change.

His background is in food production, which was an important asset when it came to the original study and early days of Growing Partners. But as the conversation evolved toward food justice and food sovereignty, he found himself the student rather than the teacher.

What he learned was there is a bigger piece to the food system puzzle than production. “It becomes more than how many bushels you can get per acre,” he said.

One of the last Growing Partners projects touched on this changing landscape. The Community Organizing Fellowship, now in its second and final year, supports food-based advocacy and leadership projects like therapeutic school gardens, food pantries and more.

According to Gretchen Groenke, program manager and acting director for Growing Partners, what the fellowship really did in the waning years of Growing Partners was expand its reach beyond Southwest Colorado and into the entire Four Corners region.

“We’re trying to set things up so they carry on without an organization,” Groenke said.

Now, the knowledge and lessons learned throughout the Growing Partners project – from the food study to its signature events – are being shared beyond Durango.

The final event before Growing Partners officially closes its doors dives headfirst into food justice and food sovereignty with the Food Justice Symposium held April 27-29 at the Sophia Retreat and Event Center in Dolores.

The symposium features two speaking events, which are open to the public on a first-come, first-served basis, and a three-day retreat, which begins Friday evening and includes events and workshops on Saturday and Sunday.

Baca is a local indigenous foods activist and founder of Taste of Native Cuisine, which offers pre-colonial indigenous catering and education. He kicks things off Friday night.

Described as a seed and food activist, White takes the stage Saturday night. She’s a seed keeper for the Mohawk community of Akwesasne, based in northern New York along the Canadian border. She is also the founder of Sierra Seeds, a small seed company based in California.

Anyone interested in the speaking events is asked to RSVP at www.icollectiveinc.org/food-justice-symposium. Tickets are $25. Pre-registration is required for the three-day retreat and can be done on the iCollective website. Whether it’s been connecting the rancher to the butcher or the farmer to the chef, Growing Partners has been connecting the pieces of a local food system for almost 15 years. With the Food Justice Symposium, those who’ve been involved take their first step into a new phase.

The two keynote speakers for the upcoming Food Justice Symposium, M. Karlos Baca, right, and Rowen White, left, are considered leading figures in the food justice and food sovereignty movements. Baca, born in Ignacio, is well known for foraging in the San Juan Mountains for ingredients. White is the founder of Sierra Seeds, a seed company in California./Courtesy photos