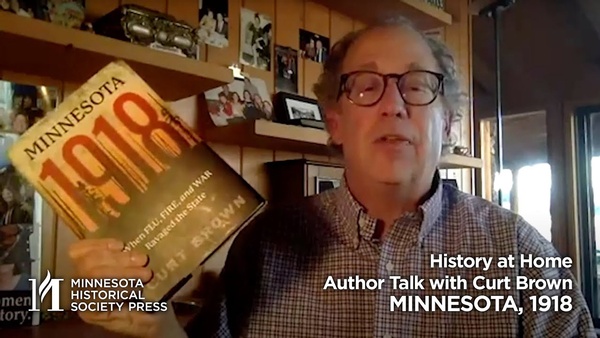 Bayfield author Curt Brown, holding up a copy of his latest book during an online talk with the Minnesota Historical Society that drew 400 viewers.

“A store tech from Garrison Keillor’s old bookshop near Macalaster told me, ‘of all the people profiting off this friggin pandemic, you’re not the worst. You just wrote a book,” Brown recalled of a recent Zoom book-signing in his old stomping grounds in St. Paul. (Keillor’s store, by the way, has since been bought by new owners, smudged and cheekily renamed Next Chapter Booksellers.)

Although he moved to the more pastoral environs of the Pine River Valley several years ago, Brown – an avid film and history buff – still has his regular gig with the Minneapolis Star-Tribune writing a weekly history column. It was this connection that helped launch him into his new and accidental role as “pandemic profiteer” and “podcast pundit.”

About three years ago, the Minnesota Historical Society commissioned Brown to write a book to commemorate the 100-year anniversary of what Brown refers to as a “trifecta of woe.” Unfortunately, the folks at the historical society, sticklers that they are, didn’t take to his suggested working title. Instead, the book was published under the title Minnesota 1918: When Flu, Fire and War Ravaged the State.

What the heck does this have to do with anything, you may ask from beneath your cloth face-covering in Durango, Colo. Well, in a nutshell, everything. In case you haven’t been paying attention, 1918 was the year the so-called Spanish flu (which actually is believed to have originated in Kansas but was called “Spanish” because Spanish newspapers were the first to report on it) took some 675,000 American lives. It was also the year a train – oh, the irony – sparked the largest wildfire and natural disaster in Minnesota history. Throw in a world war, and well, you’ve got a book – and a lot of strangely coincidental parallels to life not just in these parts, but everywhere.

Naturally, since the coronavirus hit U.S. shores, Brown’s phone and email have been buzzing off the hook, with everyone from the AP wanting to know how to fight fires in a pandemic to small town libraries requesting some face time. Podcasts, Youtube, Zoom, Facebook Live – he’s done ’em all. A recent “History at Home” online writer talk for the Minnesota Historical Society drew 400 viewers, which comes nowhere near State Fair crowds but is nothing to sneeze into your elbow at.

“It kind of blew me away,” he said, before lapsing back to his humble self. “I wrote a totally obscure book, and now it’s a little less obscure.” (For the record, he just got his first royalty check, roughly the equivalent of most people’s stimulus checks.)

Since his newfound mini-stardom, Brown has noticed there are two kinds of folks: those who can’t get enough of pandemic history and the lessons that can be gleaned, and those who want nothing to do with it. (If you happen to fall into the latter camp, thank you for reading this far. You can now turn the page to a great kale salad recipe.)

For the rest, stay tuned for a walk down memory lane that’s a bit too uncanny for comfort. Let’s start with a president who refused to publicly acknowledge the flu pandemic for political reasons. “Wilson basically ignored it because he was worried it would hurt the war effort,” Brown said. “He sugar-coated it; and we saw some of that same sugar-coating, too.”
There were protests back then, too, like the Anti-Mask League in San Francisco, members of which were known to punch holes in their masks so they could smoke. There were charlatans hawking cures, super-spreaders hocking germs and case studies on how to (Minneapolis) and how not to (St. Louis) re-open cities without creating a backlash of death.

“St. Louis eased their restrictions too early and there was a spike,” Brown said. “Numbers don’t lie.”

When writing the book, Brown put out a call for stories and artifacts from the era – which was repaid in spades. The result is a book tied together with small vignettes from daily life in 1918 – which very easily could have been plucked from 2020. And, as is the curse of the printed word, even more stories poured in after the book hit the press. Brown points to love letters that a reader shared, which were written in 1918 by a woman named LaVerne Roquette to her husband-to-be, who was fighting in France:

“Mother won’t let me out because that awful disease ... is all over the United States in every little town. All the towns and cities for miles around are all closed – everything but the meat markets, grocery, and dry good stores. At some places people have to wear gauze masks when they appear on the streets ... the government has closed all schools, churches, theatres,” one of the letters reads.

“She could’ve written them yesterday,” Brown said (with the notable exception that the letters from 1918 were actually written with pen on paper and not texted with heart emojis).

Of course, not all things follow the same familiar arc of  history. As mentioned earlier, there was a little skerfluffle known as World War I going on in 1918. As such, many of the nation’s doctors and nurses were called overseas to the battlefield, leaving fewer at home to deal with the sick. And unlike the coronavirus, which largely has spared the young, people in the 20- to 25-year-old range were the hardest hit by the 1918 flu. Then there was the issue of scientific knowledge in 1918 – or lack thereof.

“They didn’t even know what a virus was,” Brown said. “There was no PPE, ICUs and respirators, people just died.” Which leads us all to the million-dollar question: are we doomed to relive the 1918 pandemic (which came in three waves, mind you)?

“People say, in 102 years, surely we’ve made great strides,” Brown said, pointing to vaccines, anti-viral drugs and antibiotics. “ ... but have we?”

There is an eerily clairvoyant section in his book that also asks this question: “could it happen again?” Little did Brown know he would get his answer in a year’s time.

“Every expert on influenza agrees that the ability of the virus to reassert genes means that another pandemic not only can happen. It almost certainly will happen,” Brown wrote, citing John M. Barry, author of The Great Influenza.

Brown went on to quote New York Times science writer Robin Marantz Henig, award-winning author of The Monk in the Garden: “We like to believe such plunder is an ancient relic; whatever was killing people so ruthlessly in 1918 must be something we can treat by now ... But in the face of a virus that kills so rapidly, all the antiviral drugs in the physician’s armamentarium would be impotent. If a strain similar to the 1918 variant were to emerge today – a strain that, last time around, killed literally overnight – some experts believe that even modern medicine would be helpless to prevent many related deaths.”

Alas, as foreboding as this is, the point is not to hang our unwashed heads and cry into our morning walktails. It is to lift ourselves up, put on some real pants and let the past guide us – which is where learned afficionados of history like Brown come in.

“I do think we can learn from the past,” he said. “The resiliency that came through from writing these stories gives me some sense of optimism. Things were much worse in 1918, and they got through it, and so will we.”

Last he checked, Curt Brown said there was at least one copy of his book available at Maria’s Bookshop, although we’re sure they’d be happy to order you one if they’re out. You can also buy a copy online at tinyurl/MN1918. 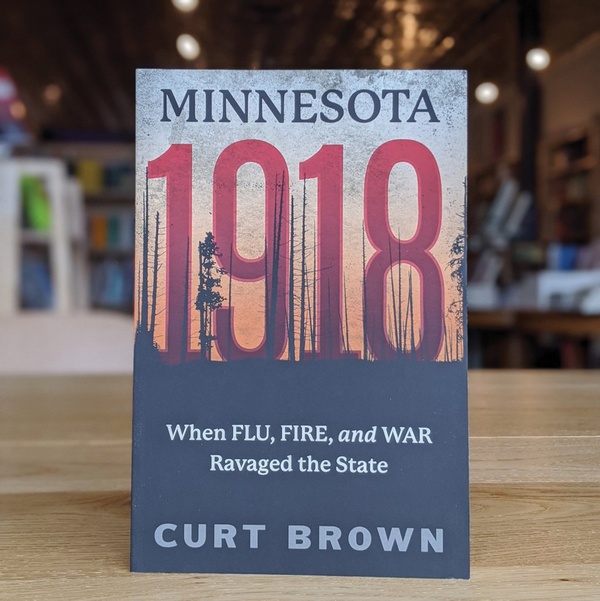