Déjà vu all over again
In wake of Boulder, state lawmakers wrestle with what to do about mass shootings 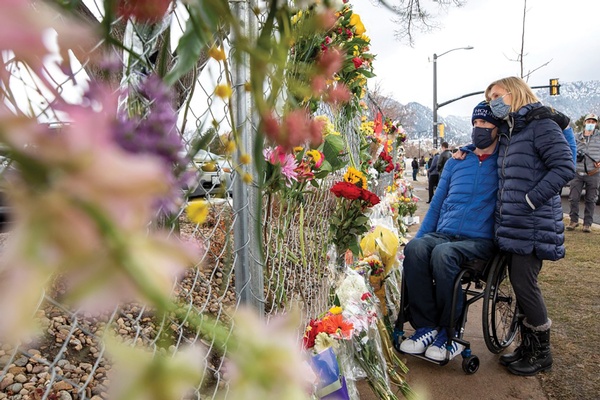 Jess Markt, left, and Lindy Hinman of Boulder pay their respects at the makeshift memorial around the perimeter of the Table Mesa King Soopers parking lot on Tues. March 23./ Photo by Kevin J. Beaty/Denverite

The mass shooting this week in Boulder has left Colorado lawmakers grappling with the same feelings of grief, resignation and concern as the rest of the country, wondering what comes next, and what policies or societal changes, if any, could stop this type of gun violence from occurring so frequently.

Democratic state Rep. Judy Amabile represents the district where the shooting occurred and has close ties to that particular King Soopers. She told CPR News her son used to work there, and his girlfriend is a current employee but wasn’t working when the shooting happened.

“I haven’t talked to her. I’ve talked to him and he was pretty stunned by that happening, but also not stunned, also not that surprised,” Amabile said. “And that's kind of how I felt too. Like, ‘Oh my God, it's something that we knew was inevitable.’ We just didn't know what it would look like or where it would happen. It's happening all over our country.”

The Boulder shooting occurred less than a week after eight people, mostly Asian women, were killed in Atlanta. It’s the largest mass killing in the state since the Aurora theater shooting in 2012.

State lawmakers put their legislative work on pause Tuesday morning to reflect on the Boulder tragedy, and take a moment of silence. But Amabile said she doesn’t want silence, because “the victims won't hear our silence.”

Many details about the accused 21-year-old shooter from Arvada are still unknown, but some who know him have described him as having “anger management issues.” Amabile said regardless of the man’s motives or mental state, Colorado needs to do more to improve mental health care, including stepping up funding. One of her children has bipolar disorder and schizophrenia and she said getting the right help has been nearly impossible.

Dealing with the sudden loss of life due to gun violence is all too familiar for Colorado, which has had some of the highest numbers of mass shootings in the country, dating back to the attack on Columbine High School in 1999. These incidents have left deep scars on Coloradans – and lawmakers – who’ve lived through them.

“People say sometimes they think that we've gone kind of numb to this. I don't think that's true at all. I just think we've gotten good at it. We have a lot of practice," Rep. Tom Sullivan, D-Aurora, whose son Alex was killed in the Aurora theatre shooting in 2012.

Alex’s death motivated Sullivan to run for office to help pass stricter gun laws. He was the main sponsor of a so-called “red flag” gun law in 2019, which allows a family member or law enforcement to petition a court to temporarily remove someone’s guns for up to a year if they’re deemed dangerous to themselves or others.

This session he's sponsoring a measure that would require people to report lost and stolen firearms. Some of his colleagues are also advancing a bill to require safe storage of firearms if there’s a risk they could be accessed by a child or someone who isn’t allowed to own guns. Both measures are making their way through the Democratic-controlled state House.

Sullivan acknowledges that gun policies alone can’t stop all mass shootings, but he views it as an ongoing issue, like the movement for civil rights, that needs to be addressed and tackled piece by piece. He sees part of his role as raising awareness. That’s one reason he wears his son’s leather jacket when he goes to work at the state Capitol.

“I hope that during the course of my day, that someone else will notice it and they'll see, this is what gun violence looks like. This is a survivor and a victim of a mass shooting.” 4

Opponents of the Legislature’s efforts to strengthen gun laws say the policies won't stop this type of violence and only hurt law-abiding gun owners. The issue has been a political lightning rod for voters. Two Democratic state senators were recalled in 2013 after they voted to pass a high-capacity magazine ban and universal background checks.

Sen. Jerry Sonnenberg, R-Sterling, said the only real way to address mass shootings, suicides and other gun crimes is by turning to a higher power.

Republican state Rep. Richard Holtorf, R-Akron, said he thinks the state and country have a mental health crisis. He didn’t advocate for specific policies the Legislature should act on, but rather for people to start taking better care of each other.

Some lawmakers said they are still in a state of shock and it was too soon to figure out the next steps. Others were frustrated that just days before the shooting a state district court struck down the City of Boulder’s ban on assault rifles. The court cited a 2003 Colorado law that says cities and counties cannot restrict ownership of guns that are otherwise legal under state or federal law.

And like a lot of Colorado lawmakers, Garnett, who grew up in Boulder and at one point lived across the street from the King Soopers where the shooting took place, has been coping with his personal feelings around the enormous loss of life.

He said he was walking down the Capitol steps when a friend texted him about an active shooter at the King Soopers.

“It just kind of stopped me in my tracks. I immediately reached out to my parents who live in Boulder … but from that point on, I was sort of paralyzed in fear.”

Garnett also remembers where he was when he learned about the attack on Columbine High School and the Aurora theater shooting. And now this moment, too, will stay with him permanently. 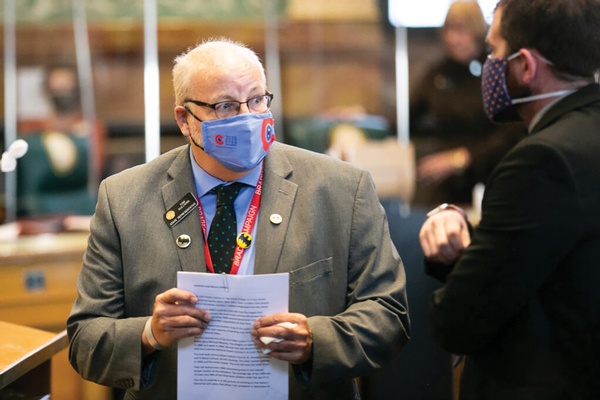 Rep. Tom Sullivan, D-Aurora, at the Capitol on March 16. Sullivan's son Alex was killed in the 2012 Aurora movie theatre shooting, prompting Sullivan to run for office in the hopes of enacting changes to gun laws./ Photo by Hart van Denburg/CPR