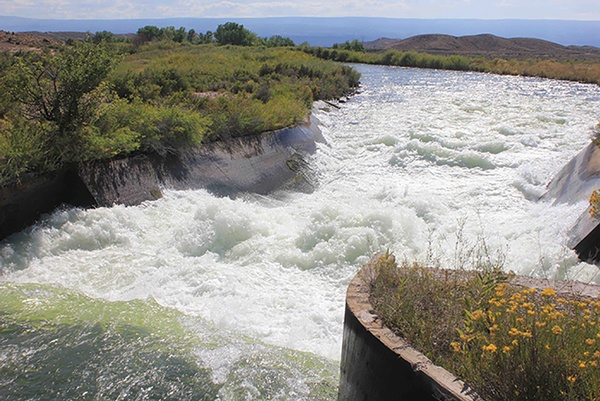 Water from the Gunnison River tumbles through the South Canal, east of Montrose. The small hydropower project forced Delta-Montrose to hit its 5 percent renewable limit under TriState and helped serve as the impetus for the coop's exit from its Tri-State contract./ Photo by Allen Best

Tri-State Generation and Transmission and one of its 43 member co-operatives, Delta-Montrose Electric Association, have come to terms. Delta-Montrose will be leaving the “family,” as Tri-State members are sometimes called, on about May 1, 2020.

What it cost Delta-Montrose to exit its contract with TriState, however, will remain a secret until then. The figure was redacted in the settlement agreement filed with the Colorado Public Utilities Commission on Fri., July 19. The figure can become public after the split occurs next year, according to Virginia Harman, chief operating officer for Delta-Montrose.

Delta-Montrose will then be supplied by Guzman Energy, although the power purchase agreement has yet to be completed, Harman said. Guzman also supplies energy to Kit Carson Electrical, based in Taos, as well as the town of Aztec.

In May, Guzman also revealed it had offered to buy several of Tri-State’s coal plants, close them down and replace the lost generation from other sources.

The split reflects a fundamental disagreement over the future of electrical generation and the pace of change that has festered for about 15 years. Those different visions became apparent around 2005 as Tri-State sought to build a major new coal plant near Holcomb, Kan. When Tri-State finally got a permit for the coal plant in 2017, it had spent nearly $100 million with nothing to show.

Meanwhile, the electrical world had turned upside down. Wind had replaced coal as cheap energy and was being integrated into power supplies effectively. Even solar was becoming cost competitive.

Alone among Tri-State’s 44 member cooperatives, only Kit Carson and Delta-Montrose had refused a 10-year contract extensions to 2050 that Tri-State had wanted to satisfy long-term loans. Their contracts remained at 2040.

Kit Carson was the first to get out of its, however. In 2016, assisted by Guzman, it paid the $37 million exit fee required by Tri-State and set out to develop solar farms in dispersed parts of its service territory. It aims to have 100 percent solar capability by the end of 2022.

In November 2016, Delta-Montrose informed Tri-State it also wanted out of its contract. Negotiations did not yield an acceptable buy-out price, and in December, Delta-Montrose asked the Colorado Public Utilities Commission to arbitrate. The PUC agreed over protests by Tri-State. A week was set aside in June, later delayed until Aug. 12.

Of course, that is a moot point now. Although no figures have been revealed by Tri-State or Delta-Montrose, a court document filed in early July reported that Tri-State’s price had been reduced 40 percent.

Meanwhile, Tri-State got approval from its members to have its rates regulated by the Federal Energy Regulatory Commission, which could have moved jurisdiction over the Delta-Montrose exit to Washington.

Delta-Montrose and Guzman have not completed plans for how the co-op will develop its local energy resources. The co-op had reached Tri-State’s 5 percent allowance for local generation by harnessing nearby hydropower.

For Tri-State’s new chief executive, Duane Highley, the task at hand now may be discouraging more exits by other members. Tri-State has argued that it moved slowly but is now is in a position to realize much lower prices for renewable energy. It is moving forward on both wind and solar projects in eastern Colorado.

Delta-Montrose, with 33,000 members, is among the larger co-ops in Tri-State. But co-ops representing nearly half the electrical load supplied by Tri-State have all expressed dissatisfaction with its slow movement away from coal, and locally, La Plata Electric Association recently asked for an exit figure, too.

Along the Front Range, United Power, by far the largest co-op, with 91,000 members, has wanted more renewable energy and greater ability to develop its own resources. Poudre Valley has adopted a 100 percent clean energy goal.

The settlement agreement filed with the PUC says DMEA “shall not assist any other Tri-State member in pursuing withdrawal from Tri-State.” The agreement also says DMEA and Tri-State agree to not disparage each other.

More than 30 percent of Tri-State’s generation comes from renewables, mostly hydropower. This is little different from Xcel Energy. But in 2017, Xcel announced plans to close two of its aging coal plants, leaving it at 55 percent renewable generation in Colorado.

Tri-State, too, is closing coal plants. A coal plant at Nucla will close early next year, several years earlier than scheduled. However, it’s small by coal plant standards, with a capacity of 104 megawatts and operates only part time.

A larger reduction is scheduled to occur by 2025, when one of three coal units in Craig will be retired. But a TriState official, speaking at a conference in Denver last June, suggested a second plant could also be retired early. That second unit is co-owned with other utilities, all of whom have indicated plans to hasten their retreats from coal.