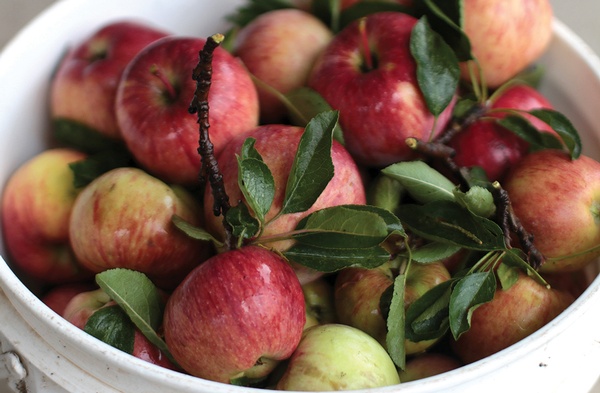 Freshly picked apples fill a bowl on their journey to becoming pie. Southwest Colorado once again is experiencing a bumper crop of apples, and the Good Food Collective is helping to make sure all that goodness doesn't go to waste. In addition to weekly gleaning happy hours, it's selling fresh cider in conjunction with Apple Days, on Oct. 10, and helping local residents and orchards deal with the abundance./ File photo

Up to your eyeballs in apples? Or peaches, pears, zucchinis or quinces? The Good Food Collective is here to help. Not only does the local nonprofit offer fruit pickers for hire, it hosts a weekly fruit-gleaning club, where the volunteer fruit-picking angels come and relieve you of all your excess fruit. And, if you’re more of a do-it-yourselfer, fruit-picking kits and even a portable apple press are available for rent.

“It’s been a bumper crop for fruit for sure,” the Collective’s Executive Director Rachel Landis said Tuesday. “Things are going crazy.”

Just how crazy? This harvest season, the GFC expects to help harvest close to 185,000 pounds of fruit and veggies – that’s more than 92 tons. By comparison, it harvested a relatively measly 118,000 pounds in 2019.

But just what to do with all that food? (For the purposes of this story we’ll stick to apples, just so we’re comparing apples to, well … you know.)

For starters, the bad apples – which aren’t “bad” in a villainous way, just blemished or unfit for human consumption – will be fed to the piggies. The GFC works with local farmers who put the produce to use on their feedlots. Some of the “good” apples will go to local cideries for the hard stuff, and some will be pressed into cider (the light stuff) for the upcoming Apple Days Festival, Oct. 10, at the Farmers Market. (A small factoid: it takes 18 pounds of fresh apples to make one gallon of cider.)

As for the rest, it will be given to local food banks and pantries.

“With the pandemic, we went from one in eight people being food insecure to one in three,” said Landis. “There has been a tenfold increase in demand at food banks.”

And that food insecurity is what is at the heart of the GFC, which started in 2018 as a way to shore up the regional food system and make sure good food doesn’t go to waste.

“We’re just trying to get as much fresh, healthy food to people who need it this season,” said Landis.

Part of that equation is a new industrial food dehydrator that is expected to arrive next week from Eugene, Ore. The dehydrator will be housed at Durango Artisan Foods and available for public rental as well as serving the GFC’s needs. She said the dehydrator will help extend the life of apples and other fruit on pantry shelves, which otherwise would go bad.

“There are a lot of programs that are limited to shelf-stable goods only,” she said.

The program will be called “Fruit for Good,” and Landis said there’s a chance the dried produce could eventually land on local store shelves. Proceeds from the fruit sales would be used to finance the GFC and its program. Landis said the income will help offset the organization’s dependence on grants, which are not always a sure thing. “There’s no telling if grants will be available year to year,” she said.

And speaking of income, another tenet of the GFC is to pay farmers and growers for their food – the literal fruits of their labor – when at all possible. This helps keep farmers in business and the local food supply chain going. The GFC is also working to help pantries buy produce directly from the farmers.

“The goal is to get food assistance programs to buy as much produce as possible from local growers,” she said. “We’re helping them with things like, how do you buy from a farmer? It’s different from ordering off a Sysco truck.”

The GFC is also helping to advocate for local food at a state level and tap into the $1 million that is available for local food procurement. Closer to home, it helped land $100,000 in CARES Act funding from La Plata County to go to local food assistance, with a portion of the money to be used to buy food directly from local farmers. Landis said the funds will be a welcome boost to local farmers who saw part of their revenue dry up during the pandemic when restaurants and schools closed.

Although the GFC has taken over the annual Apple Days festival and local gleaning activities, Landis is quick to note these things were all in place long before her organization came along. Rather, the GFC is just part of a bigger movement of pivoting toward local food across the Four Corners and the country.

“It’s not just us, there’s a sea change going on,” she said. “We’re just here to help fill in gaps so we have a regional food system that’s healthy and can feed people.”

And speaking of Apple Days, this year will be the 12th annual, albeit in a smaller COVID-era format. “It’s very much Apple Days light,” she said.

Instead of the usual brouhaha at Buckley Park, this year’s Apple Days will take place at the Farmers Market on Oct. 10. There will be an apple press demo, but it won’t be all-hands-on-deck as in years past. Instead, folks can pre-order their cider on the GFC’s website (goodfoodcollective.org) and pick it up that day.

And to get ready for the orders, the GFC is seeking volunteers to help harvest apples next week (sign up also at goodfoodcollective.org.)

Landis is hopeful to draw upon people hungry for social (-ly distant) engagement and some positive news for a change.

“We can’t do a massive fest, but at least we’ll get people out there and give them something real and hopeful,” she said. “It may sound silly, but it’s such a simple joy to go out and pick an apple.”

To rent a harvest kit, sign up for next week’s apple harvest or volunteer at a Wednesday fruit-gleaning happy hour, go to www.goodfoodcollec tive.org. 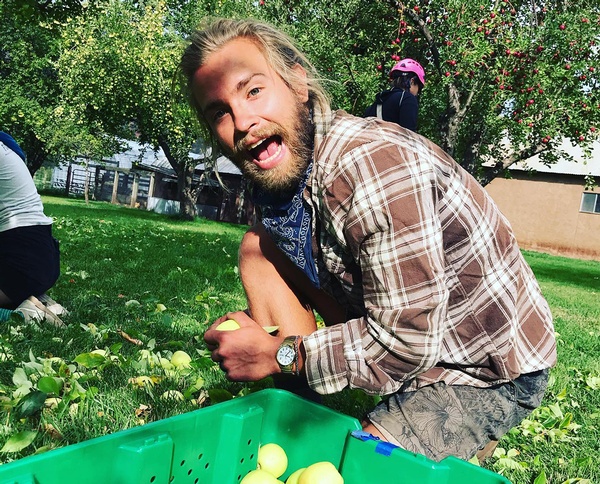 A picker with the Good Food Collective gathers apples recently. In addition to sending some apples to local food pantries, some apples will be pressed into cider for the upcoming Apple Days Festival. It takes 18 pounds of apples to make one gallon of cider./ Courtesy photo