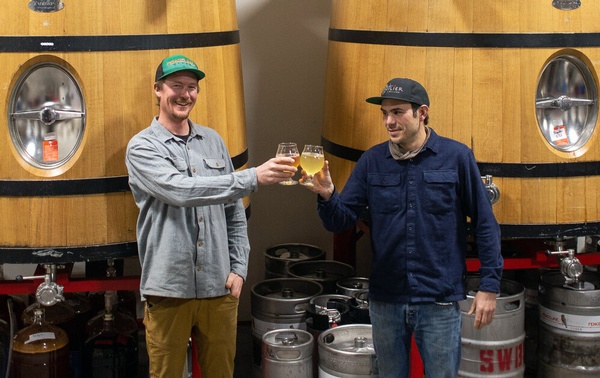 The apple of Southwest Colorado’s cider scene has caught the attention of the international sipping crowd. Last week at the New York International Cider Competition. Mancos-based Fenceline Cider took home two awards, winning a silver in the Wood-Aged Category for its Windfall cider and a bronze in the Fruit Cider Category for its Understory Elderberry. But, perhaps even more exciting, it was named “Colorado Cider Producer of the Year “at the New York City event.

“We’re thrilled to be honored with these three awards from NYICC,” Sam Perry, Fenceline co-founder, said.

Fenceline’s Windfall Cider is described as a French-style cider, made from a blend of French Bittersweet apples sourced from Shawn Carney’s Atomic Orchard in Cedaredge, Colo. The juice is fermented slowly, finished in French oak casks and packaged in 750ml bottles.

Perry said the Windfall, is a great example of a proper “mountain-west cider” and one of his favorites. “The higher tannins and acid, produced by fruit grown at this altitude and dry climate, can create some remarkable flavors,” he said. “It is the exact style of cider that got me excited about planting an orchard and working with apples.”

The Understory Elderberry, released in four-pack cans in July 2020, combines two old world flora – elderberry and apples – to produce a bold purple cider with the thick tannins of the elderberry forming the perfect complement to the sweetness and acidity of the apples.

“Our new Understory cider is truly unique,” said Perry, adding that elderberries have been known for centuries as a folk remedy with perceived antiviral properties, “which I think makes it the perfect cider for this summer.”

The International Cider Competition is open to commercial cider producers from around the world. What sets it apart from other international beverage competitions is it’s a “trade only” blind judging panel made up of retail buyers, restaurant beverage directors and hoteliers.

Fenceline was founded in 2018 by Perry and Neal Wight, who sought a way to upcycle the thousands of abandoned heritage orchards found throughout Montezuma County. Fenceline’s full line of ciders are available at liquor stores throughout the Four Corners or get it straight from the source at its taproom along the banks of the Mancos River, at 141 S. Main St., Mancos.