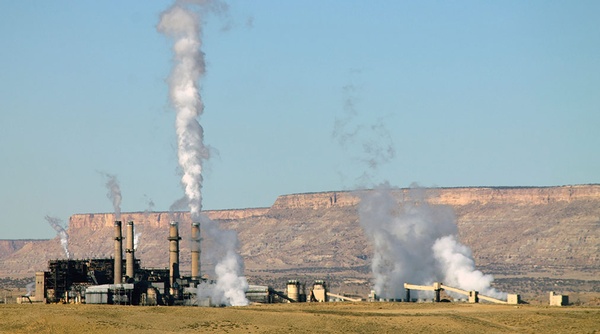 There's a lot of good and bad in President Biden's historic new legislation to address climate change. Among the concerns are provisions that could extend the life of a coal plant in northwestern New Mexico./ Photo by Jonathan Thompson

Well, hot diggety damn, folks. It looks like the Democrats finally convinced that coal-lovin’ West Virginian Sen. Joe Manchin to get on board with a climate bill. Heck, even Sen. Kyrsten Sinema, the once-progressive Arizona Democrat who has cozied up with corporations in recent years, is now saying she supports it.

Getting the bill passed did require serious compromising on the Democrats’ part. This ain’t no Green New Deal. It isn’t even Build Back Better. It’s, well, the Inflation Reduction Act, which includes $369 billion to fight climate change. It also includes a provision that basically forces the feds to auction off oodles of acres for oil and gas development, which some folks understandably are upset about.

There’s a lot of good in this bill (higher royalties for oil and gas, including on methane that’s extracted but not marketed; a methane fee; billions of dollars for environmental justice; and lots and lots of money for renewable energy). And some bad: The oil and gas leasing thing, for one. And I’m especially irked that it gives incentives for purchasing electric cars but not electric (or non-electric) bikes. Why not pay people to not buy a car? Now that would be revolutionary.

And then there’s 45Q. While everyone was fretting over oil and gas leasing, they missed what could amount to a much bigger giveaway to the fossil fuel industry: Changes to the section of the tax code (45Q) that subsidizes companies to capture carbon from industrial facilities like cement factories and power plants. Scintillating stuff, no?

Well, it could be. The carbon capture tax credit is similar to solar or wind production tax credits, in which a company receives credit for each unit of power a facility produces. Only with 45Q it’s a credit for each ton of carbon captured: a $35-per-ton credit for carbon used for enhanced oil recovery and $50 per ton for geologically sequestering it without using it for oil production. The idea is to incentivize firms to install very expensive carbon capture equipment on, say, cement factories, which are tough to decarbonize. Companies also can sell their prospective credits on the tax equity market to finance a future project – if they can find willing buyers.

That’s what Enchant Energy wants to do to pay for its plan to retrofit the San Juan Generating Station in northwestern New Mexico with carbon capture equipment. The plant’s last operating unit is slated to shut down at the end of September. Enchants, in cooperation with Farmington’s municipal utility, want to keep the plant running – without carbon capture – until it can raise enough money to begin construction on the carbon capture equipment. But with the deadline quickly approaching, Enchant has not been able to secure financing and missed multiple benchmarks.

They might get help from the new bill. The section on 45Q looks like it came right out of the playbook of the Carbon Capture Coalition – which includes Shell, Valero, Peabody Energy and Arch Resources. If the bill passes, the subsidy (yes, a tax credit is a subsidy) would be upped to $85 per ton for geologically sequestered carbon and $60 per ton if it’s pumped into an oilfield. And, equally significant, companies can receive the credits as direct payments. Both provisions would be a huge boon to Enchant and its plan to keep a dirty old coal plant running, polluting and using billions of gallons of water each year.

Enchant Energy claims it will be able to capture 95% of the carbon from the plant or nearly 6 million tons per year. If that were to happen – and it’s extremely unlikely if not impossible – the feds would hand Enchant about a half-billion dollars per year. Taxpayer dollars, mind you. And that’s on top of the millions of dollars the Department of Energy has already given Enchant to produce a front-end engineering study and look into the feasibility of geological sequestration in the San Juan Basin, where the geology has been perforated by 40,000 oil wells. There may be more: Since Enchant hasn’t been able to raise enough cash on its own to pay for the venture, it has turned to the federal government for up to $1 billion more in funding.

All of this to keep a coal plant running and polluting for years, a coal plant that otherwise would be closing down altogether a couple months from now. Sure, it’ll keep the coal miners and power plant operators on the job, and that’s great. It’ll keep the property taxes coming to the local schools. That, too, is great.

But I’ve got a better idea: Shut down the power plant so that it stops sucking water out of the drought-starved San Juan River and stops polluting the area’s air and harming people’s health. Take the millions or even billions of dollars that would have gone to Enchant Energy, and spend the money directly on the communities that have been harmed by the San Juan Generating Station and the Four Corners Power Plant for more than 50 years. Those people deserve it. An obscure New York City equity firm does not.