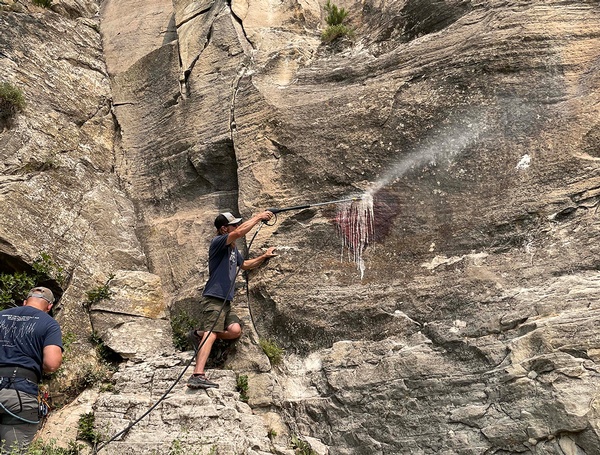 The Durango Climber's Coalition is a new nonprofit advocacy group that was created to improve and maintain climbing crags. How do they get it done? Well, by working with the very institutions dirtbags are known for rebelling against. Here, graffiti is removed from the popular X Rock bouldering and climbing area./ Courtesy photo

You might call them hooligans, grandmothers call them whippersnappers, and I, myself, call them my friends. But true-blue rock climbers will hold their heads high and call themselves “dirtbags.”

Dirtbags may be known for their ripped-up jeans and lack of conforming to societal norms, but there is a group in Durango who is disrupting that stigma.

The Durango Climber’s Coalition is a newish nonprofit advocacy group created to help the betterment of area climbing crags by working with the very institutions dirtbags are known for rebelling against. It was created to give the dirtbag a much better reputation and whose goal is to have a positive impact and give back.

The brains behind the Climber’s Coalition is no stranger to the local climbing community. Luke Mehall created the group sometime around 2016. “Obama might have been president,” Mehall jokingly said, trying to recall the exact year. The coalition went dormant for a few years, he said, until about 2020, when it picked up steam.

It was an incident at the latter of these three areas that led Mehall to form the Climber’s Coalition in 2016-ish. He and his friends were climbing at Cascade Creek when some other whippersnappers were unknowingly pelting rocks at them from above. The non-malicious occurrence kept happening, and so Mehall reached out to the Forest Service for help.

“We spoke to the Forest Service to see if they could put up a sign that just asked people not to throw rocks,” Mehall recalled.

What he found out through the Forest Service was more than an issue of throwing rocks, though. He learned that Cascade Canyon was actually privately owned, and that if climbers, hikers or anyone wanted to continue going there, someone would have to purchase the property and turn it into a conservation easement.

Mehall said that opened a can of worms and led him and his friends down a rabbit hole that ultimately resulted in the organization of the Durango Climbers Coalition.

While the ownership of Cascade Canyon issue is still an open, albeit private, case, the Coalition is closing in on some other great projects around town. It has tackled tough graffiti clean-ups in the Sailing Hawks and X Rock bouldering areas, replaced old and dangerous bolts and anchors on popular local climbing routes, and advocated for responsible crag stewardship. They have brought together Durango’s dirtbags and non dirtbags alike to help foster a community, and in doing so, grew their support.

“We just started teaming up with all these groups to do the clean-up,” Mehall said about the group’s most recent project at X Rock.

The popular climbing area on the northern city limits has had an uptick of users over the years, especially since the pandemic and ensuing outdoor recreation boom. With the rise of foot traffic, the trail to the crag has seen a lot of wear and tear, including erosion and trash. So, the good dirtbag stewards of Durango decided to reach out to land management entities to try to do something about it.

The climbers connected with the City of Durango, La Plata County and the Bureau of Land Management, all who manage various parts in and around the climbing area. The groups did a walkthrough to determine what needed to be done and who needed to do it, and that is how the Southwest Conservation Corps’ (SCC) Youth Crew was brought in.

SCC is a chapter of a much larger, national organization called Conservation Legacy, which serves in building and maintaining trails to preserve land, air, water, animals, people – pretty much our entire habitable ecosystem. The organization’s larger goal is to build better communities by connecting people to the land where they live.

“Next thing I knew, we had a crew of teenagers out there doing trail work,” Mehall recalled.

Teresa DiTore is the Youth Programs Manager and the person responsible for these Conservation Corps teenagers; and she couldn’t be more excited for them. A Durango resident, DiTore has been working with SCC for 6½ years and has watched the youth program grow exponentially in that time.

The program, she says, used to be small with about 12 students per summer, but with additional funding – mostly from the state’s Great Outdoors Colorado (GOCO) program – and more interest from the community, she was able to move into a more youth-focused role, and the program quadrupled in size. Now, they have upwards of 60 kids ranging from 14 to 18 years old in paid positions doing conservation work each summer in the community.

“It’s awesome because they’re working in their back yards, they’re improving the lands, they’re gaining a ton of experience in leadership, communications and conservation skills in general,” DiTore said.

The students worked on the X Rock trail for two weeks, camping near town at night and going back to the trail to work during the day. Together, they put in 20 rock steps and a 20-foot multi-tiered rock wall topped with sustainable tread to help fix erosion and drainage issues. They also rerouted the trail, making it more accessible and easier to walk on. After the crew finished its allotted two weeks, the Climber’s Coalition held a trail-work day and many of the students – who were by no means obligated to – showed up simply because they were proud of the work they’d put into it.

“For them to be out here moving hundred-pound rocks and feeling strong for their first job, they were saying things like, ‘I didn’t know I had the strength to do this,’” DiTore said of the students.

In addition, for many of them, this was their first job or their first time camping, so they were pushing themselves outside of their comfort zones.

“They were stoked … they were very excited,” DiTore said.

And now the community can get stoked and excited. Not only has the trail been made more user friendly by the SCC and the rocks scrubbed of graffiti by the Climber’s Coalition, but the parking area has been leveled to allow for easier vehicle access. But there is still some trail work left, and there are upcoming trail work days where the community is invited to come out and help – and admire the crew’s hard work.

“Sometimes people look at youth crews and think they can’t do projects like this,” DiTore said. “It was cool to see them go out to X Rock and just blow everyone out of the water. They did such an amazing job.”

So, as far as dirtbag climbers or hooligan youths go, perhaps anarchy is turning into advocacy, and the grandmas of the world will be pleased with this new era of whippersnappers. ?