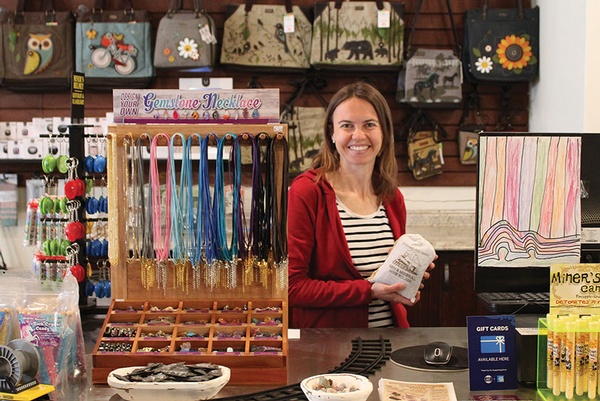 Cristina Grave, owner of Durango Treasures, which recently opened in the old Irish Embassy Pub spot on the corner of Main Avenue and Ninth Street. Grave opened the store after seeing a need for expanded offerings at her other store down the block, Twilight Toys./ Photo by Scarlett Moore

After the Irish Embassy Pub, another COVID casualty, closed in September 2020, its iconic location was put up for rent. At the beginning of this year, passersby began to notice new activity in its long-vacant windows, and on April 2, a store called Durango Treasures officially opened to take the pub’s place. Out of curiosity, we went down to chat with the owner, Cristina Grave, a six-year Durango resident who also owns Twilight Toys, in the 600 block of Main Ave.

Grave opened Durango Treasures after demand for a wider selection of items grew. “Since (Twilight Toys) opened we have had a lot of people coming in and asking for children’s items we don’t have the space for – like strollers, home decor, pet toys, just a little bit of everything,” she said. “But our space is very limited.”

Grave was inspired to open up another store for more variety. Now, she sells everything from baby clothes and toys to unique, Colorado-themed kitchenware. “I’m super excited to have this space; it’s such a beautiful building!” she exclaimed.

The crown jewel – or gem, if you will – of Durango Treasures is a small “mining cave” in the back. It’s lit by warm LED “lanterns,” with walls designed to look like real rock. The prospectors can buy a bag of dirt containing either gems or fossils, and pan out their treasures in the cave’s trough of running water. “A lot of people love to have an extra attraction, something for the kids to do,” Grave explained. “It’s not just for the kids or the adults; it’s for the whole family.”

Durango Treasures only occupies the upstairs space, which took 3½ months to renovate. The mining cave was built where the pub’s dishwasher used to be. Grave recounts, “We did have to do a lot of remodeling. The counter was huge, and there were walls everywhere that we needed to knock down, just to make more room … It took us from the end of December all the way to April 2.”

While it may seem like a tourist shop at first glance, Durango Treasures is also meant for Durango folks, said Grave. In fact, the store offers locals a special discount. “A lot of locals are coming in, because they see a lot of things over there that fit all needs, instead of just tourist stuff. It’s been great, a lot of support from locals.”

Grave is optimistic about the shop’s future: “We love being there, and I think it’s going to be a great spot for the whole family to come!”