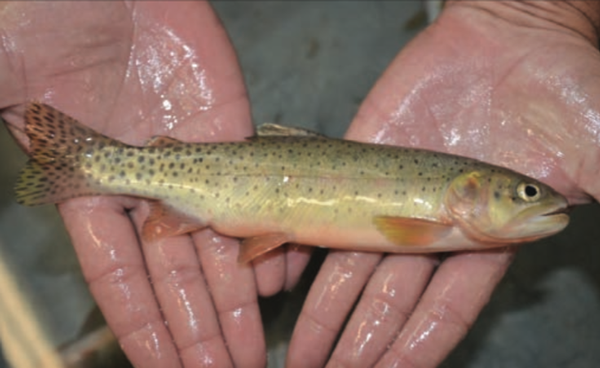 A specimen in the Smithsonian from 1874 was used to identify a previously unknown subspecies of Colorado River cutthroat unique to SW Colorado./Courtesy Photo

A rare subspecies of cutthroat trout, thought to be long extinct, has risen from the waters of Southwest Colorado.

The fish, a unique San Juan Basin lineage of the Colorado River cutthroat, was identified this summer in head- waters in the San Juan Mountains thanks to the wonders of modern genetic testing.

“Anyone who just looked at these fish would have a difficult time telling them apart from any other cutthroat; but this is a significant find,” Jim White, aquatic biologist for CPW in Durango, said. “Now we will work to determine if we can propagate these fish in our hatcheries and reintroduce them into the wild. It’s a great conservation effort and a great conservation story.”

However, in 2012, the San Juan River Basin strain was identified in a genome-sequencing project led by CU-Boulder researcher Jessica Metcalf. The study was based on DNA samples from cutthroat specimens that were preserved in ethanol dating back as far as 150 years. The team stumbled on the San Juan Basin subspecies when testing a cutthroat collected in 1874 in the San Juan River near Pagosa Springs. It is housed in the Smithsonian in Washington, D.C.

Metcalf and her team assumed the strain had long since vanished from the area’s waters. That is until White and other CPW biologists got involved. Armed with the trout’s genetic “fingerprints,” they set out to test all cutthroat trout populations they could find in the basin in search of any relic populations. Eight small populations were found in the area, both within the San Juan National Forest and on private property. The populations are in isolated habitats and sustained through natural reproduction.

But, no sooner had the fish been brought back from the brink then it faced another threat: fire and ash from the 416 Fire. In August, crews from CPW and the Forest Service removed 58 of the San Juan cutthroats from two remote creeks north of Durango. According to CPW spokesman Joe Lewandowski, the fish are now in what’s called an "isolation unit" at the Durango Hatchery to ensure they don't pick up any diseases from other fish.

“In the spring, hopefully, we'll be able to spawn them and start developing a population,” he said.

Developing a brood stock of these trout to be reintroduced into the San Juan River headwaters will be a key strategy for their long-term survival. Protecting them from disease, non-native fish, habitat loss and over-harvest are other factors the CPW will consider in a long-term conservation plan for the fish.

“We always ask ourselves, ‘What if we could go back to the days before pioneer settlement and wide-spread nonnative fish stocking to see what we had here?’” White said. “Careful work over the years by biologists, finding those old specimens in the museum and the genetic testing gave us the chance, essentially, to go back in time. Now we have the opportunity to conserve this native trout in Southwest Colorado.”

Cutthroat trout originated in the Pacific Ocean and are one of the most diverse fish species in North America, with 14 subspecies. However, native Colorado cutthroat populations have dropped precipitously over the years due to a variety of issues, including low flows, competition with non-native species, poor water quality and riparian habitat alterations. In an effort to save native cutthroat, CPW has been stocking the species in high lakes and headwaters since the mid-1990s. CPW has also worked to remove and prevent upstream migration of non-native trout, such as in the Hermosa Creek drainage, to protect the Colorado River cutthroat found there.