'Doo-ing' the right thing
What to do when nature calls in nature? More often, folks are being asked to pack it out 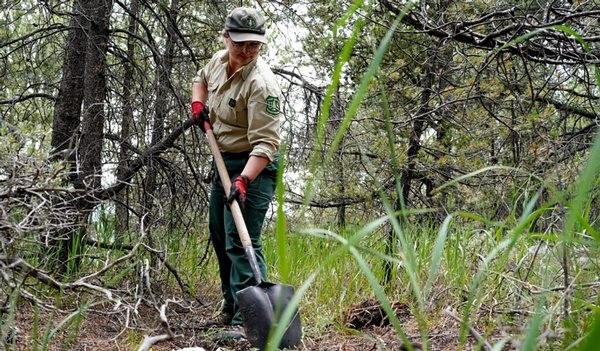 Mae Watson, of the Eagle-Holy Cross Ranger District, digs a pit to dispose of human waste near Homestake Road dispersed camping area on July 22. She's among a group of staffers assigned to visiting sites and telling campers they are now required to pack out their human waste./ Hart Van Denburg/CPR News

No doubt you’ve heard the saying: “Take only pictures, leave only footprints.” In beautiful outdoor spots across the West, however, people have been leaving something far more disturbing: human waste, piles of it.

“Fecal matter with toilet paper on top,” she said matter-of-factly, standing over a few of these lilies on public land outside of Minturn.

Peterson, a recreation staff officer with the Eagle Holy-Cross Ranger District, was on a wooded hill, just a short walk from tents and parked RVs. A faint path had been worn into the soil leading to the de facto restroom.

The surrounding swath of public land is wildly popular with dispersed campers, people hungry for the cozy quiet, excited to be surrounded by mountains and pine trees and creeks. In recent years, it has gotten a lot busier – and its human-waste situation has gotten out of hand.

“That would make me uncomfortable to have my kids or my dogs or just someone out hiking end up walking upon this,” said Peterson, a 33-year veteran of the U.S. Forest Service.

She added that there’s no other word for the sight than “nasty.” Same goes for the piles left right by the reservoir and the so-called “forest toilet” her agency discovered last year. Basically, it was a toilet seat placed over a big, wooden box and it’s still filled with fetid plastic bags chock-full of human waste. Rangers hope to figure out a way to dispose of it soon.

So before things get any worse, the ranger district is trying something new. In one popular spot known as Homestake, users are now required to take human waste out with them. Staff are handing out free supplies that help make that task a little less, you know, gross.

Forestry Technician Claire Perez is young and soft spoken, and looks absolutely comfortable speaking on the topic. She unfurled one of the many human-waste disposal bags staff carry with them, sometimes known as “wag bags.” They’re filled with powder “that dissolves the waste and makes it not smell,” she said.

That powder also makes it safe to throw these small bags in a garbage can, plus the bags have a plastic skirt to wrap around the user for privacy. So far, Perez has found campers to be pretty receptive.

“Most people want to do the right thing,” she said. “We just have to help them do that.”

And the “right thing” is changing. For generations, outdoor lovers were taught to dig a hole away from water, cover it up, and they were all good.

In recent years, however, we’re learning sometimes that isn’t good enough. Jeff Marion, a biologist with the U.S. Geological Survey at Virginia Tech, has watched the trend of more and more land managers requiring complete poop removal in recent years. This is often mandated in areas too rocky, arid or overused to allow for burying.

This is true for some of the places Marion himself has adventured, including the slot canyons of Utah’s Zion National Park. Years ago, he carried a stinking bag through those narrow rock walls for four days.

“People were not hiking next to me. Let’s put it that way,” he said, busting out in a laugh.

But he added that waste-bag technology has likely gotten better since then. And besides, he said he sees packing out your own waste when required as part of a social contract.

It’s hard to know how much this new poop gospel has reached the general public, however. On the busy Snowmass Lake Trail, outside of Aspen, removing your own waste is recommended but not required. The trailhead has a box of free bags, but over the course of two hours, I don’t see anyone take one.

Will Keslar, starting off on a bike ride, explained that in the 45 years he’s lived in Snowmass, he never felt the need to carry out his waste. Instead, he thinks people should just learn to bury it better. He joked that maybe some snappy ad campaign would help.

“Something like Smokey the Bear with a shovel,” he said, laughing.

Stephanie Ryan, ending a trail run, thinks the bags are a “great idea” but admitted she only manages to use them about a quarter of the time. “Especially when you go up the trail and you see horse poop the entire way,” she said.

As she sprinted back to her car, she yelled back: “Sorry we don’t do better! We will do better!”

Back near Minturn, campers in Homestake seemed fairly open to this new poop reality.

Forest Service staff were going from campsite to campsite explaining the rule and handing out bags. A group of men from Denver quickly became a chorus of “yeses” and nods, as their dog, Jane, barked along.

“I think it’s actually easier than burying it,” said Jason Humphrey, one of the campers.

His friend, Ben Hamilton, who’s been camping for decades, added that he didn’t know this was required in parts of Colorado.

“It’s a little different,” he said, “but I understand why it needs to happen.”

The group ended up taking several bags – plus a bandana for Jane. I asked the ranger district’s Paula Peterson if that gave her hope.

Until one day, she imagines, packing out your poop could just be another fact of being outside.