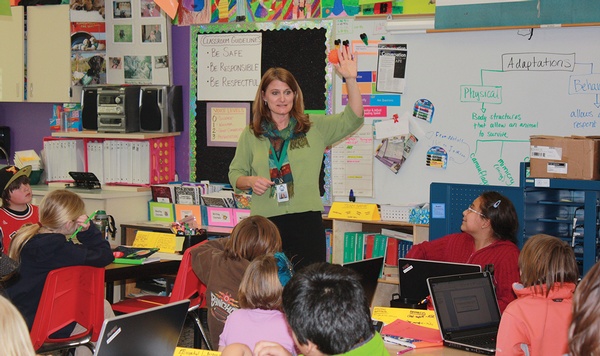 Classrooms such as this could get more money if voter pass Proposition CC this November, which would allow the state to keep excessive tax revenues for three proposed uses: public schools, higher education, and roads, bridges and transit. In the first year, each area could get an estimated $100 million./File photo

No matter what side people take on the issue, they all agree that Proposition CC is the most significant challenge to the Taxpayer’s Bill of Rights, or TABOR, since it passed in 1992.

TABOR, which is part of the Colorado Constitution, has two main parts. First, it guarantees that only voters can approve tax increases. Second, it limits how much money the state can take in and spend.

What Proposition CC would do is nullify the limits on state government spending.

TABOR has always been a complicated tax issue and a menace to budget writers statewide for more than a quarter-century. But, that was kind of the point.

Those limits are calculated using state revenues from the previous year, adjusted for inflation and population growth. If the state collects more than the amount calculated, via things like sales, excise and income taxes, it is required to give the excess back to taxpayers.

Like most laws, everything about TABOR hasn’t worked out perfectly. For example, the equations used to keep state spending in check have not allowed Colorado to recover quickly from downturns in the national economy, like the 2008 recession.

There have been some attempted tweaks over the years. Referendum C, passed in 2005, raised the TABOR limit on spending for a five-year period. It certainly gave the state some wiggle room, but it still kept a cap on it.

Proposition CC, on the other hand, would remove the cap completely – and for all time.

The other part of TABOR, guaranteeing that only voters can approve tax increases, would not change if Proposition CC passed.

It’s something proponents of the measure are quick to spotlight. The first three words of the ballot measure read, “Without raising taxes ...” – and, that’s true. The measure would not increase taxes. It will, however, change things for taxpayers.

Because Colorado is not allowed to keep any excess revenues under TABOR, it refunds the money by adjusting state income tax payments. So, although it’s not a tax increase, it might feel like one in April.

According to state officials, the revenue collected for the 2019-20 fiscal year is expected to exceed the TABOR limit by $310 million, and in 2020-21 it will exceed it by $342 million. If those funds were given back to taxpayers, it would mean an extra $26-$90 for each individual.

If those funds were not given back, it would mean, each of the three proposed uses listed on the ballot – public schools, higher education, and roads, bridges and transit – would get about $100 million.

Proponents of the measure focus on what that $100 million could mean for teachers’ wages, rising tuition rates and crumbling highways.

budgets. Any funds being spent on public schools, higher education, and transportation today could be redirected for other purposes or projects.

Even with all the current limitations, Colorado’s leaders have found ways around TABOR – like increasing fees, instead of taxes – and the size of the state’s revenue stream has swelled to three times what it was when TABOR passed just 27 years ago.

Opponents call Proposition CC a blank check; proponents call it an investment. It’s up to voters to decide which is which.

For more from each side: Vote No on CC, votenooncc.com, and Vote Yes on CC, www.yesonpropcc.com.

The other big ticket item on the November ballot is Proposition DD, which would legalize and tax sports betting.

Legalizing sports betting has been trending across the country since the Supreme Court handed down a decision in May 2018 that nullified a federal ban on sports gambling. This gave states the authority to make the choice for themselves – and many have, including New Mexico, although not all have chosen to tax the proceeds.

Proposition DD, which was put together by the Colorado Legislature last spring, would legalize sports betting, tax casinos that handle the bets and fund certain projects with those tax revenues.

The tax is 10 percent of the casino’s proceeds, which is the amount the casinos make after paying winners. An example offered by state officials is if a casino collected $100 in bets on a sporting event, the winners would get $95 of that money in payouts and the casino would get $5. Of that $5, the casino would pay 25 cents in federal taxes, 47.5 cents for the Proposition DD tax, and keep just over $4.27.

According to state officials, the projected revenue from this new tax is $16 million in the first five years, but that’s only a guess. Taxes collected from gambling sources are notoriously unreliable.

If Proposition DD passes, the revenues would be directed to four things: the cost of regulation, gambling addiction services, a hold harmless fund (which is used to reimburse community groups that get funding from traditional gambling sources and may have lost money due to the legalization of sports betting), and the Colorado Water Plan.

The Colorado Water Plan and associated water projects would get the bulk of the tax revenue, an estimated $14.9 million of the $16 million. The proposition doesn’t clarify exactly what water projects means, but offer a general outline including water storage, supply, conservation, land use, engagement and innovation activities, agriculture, the environment and recreation.

Proponents of the measure highlight the need to fund the Colorado Water Plan, which currently does not have any dedicated funding source. Cost estimates for the plan, however, are in the tens of billions.

So, some wonder if taxing an unreliable source for what amounts to a drop in the bucket is even worth it? Others contend, something is better than nothing.

Ballots went out to all registered voters across La Plata County on Oct. 12. Ballots need to be received by 7 p.m. Tues., Nov. 5. Voter service and polling centers will be open daily from Oct. 28 - Nov. 5, and drop boxes are open 24 hours a day. For the latest times, locations and more, go to www.co.laplata.co.us/government/departments/ elections or contact the La Plata County Clerk’s office at 382-6296. More information is also available at the state

Ballot Issue 6B: Tax increase to help fund the Animas Mosquito District. The district is asking voters to increase property taxes by no more than .41 mils (which would be about $11.73 on a home valued at $400,000). Following a summer when mosquitos in the Animas Valley tested positive for West Nile Virus, the special district is looking to hire two more employees to help with testing, trapping and more.

Ballot Issue 6D: Creation of the Southwest La Plata Library District and a tax increase of 1.5 mils (which would be about $42.90 on a home valued at $400,000) to fund operations and services in the newly created special district that would include the Sunnyside and Florida Mesa branch libraries.

School Board Election: Incumbent Stephanie Moran and challenger Kristin Smith are battling to represent District D, which encompasses Durango and the surrounding area, on the Durango 9-R Board of Education. The La Plata County League of Women Voters held a candidate forum for the two Oct. 7. Check out the video link at www.lwvlaplata.org.