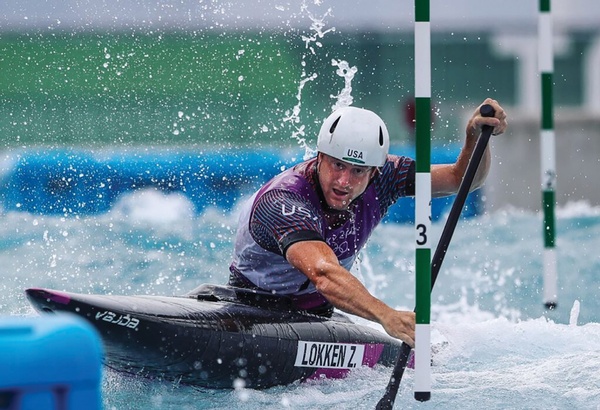 Set to compete more than 5,750 miles from their hometown, a pair of athletes carried the support of Durango to the Olympics.

Only five days into the Summer Games in Tokyo, which were postponed from 2020 because of the COVID-19 pandemic, Durango’s Christopher Blevins and Zachary “Bug” Lokken wrapped up their debut Olympic appearances.

Blevins would place 14th out of 38 riders in the men’s cross-country mountain bike race Monday. Lokken reached the finals of the men’s canoe slalom and finished seventh.

While laser focused on the goals in front of them, both could feel love pouring in from the town in which they grew up.

“Hearing from everyone back home, its been the most special part of being an Olympian,” Blevins said. “It’s truly amazing to hear the massive support and love from Durango. Even though we were over here experiencing the unique feeling of being an Olympic athlete, it’s what’s coming from home that makes me realize how fortunate it is to be here.”

Lokken’s first paddle at the Kasai Canoe Slalom Center came in the first of two qualifying heats. Fifteen athletes would make the semifinals and 10 would reach the finals.

The man-made river featured 25 gates that couldn’t be missed without a massive time penalty, and contact with a gate resulted in a two-second infraction.

Lokken, a 2012 graduate of Durango High School, was third after his first heat and fourth after the second to reach the semifinals with ease. A two-second penalty in the semifinals didn’t cost him a chance at the ultimate goal of reaching the final, and he went in seeded seventh.

“I think my nerves showed in that final run because I had a lot of mistakes,” Lokken said. “I was leaning on my edges and tripping on my paddle. I wanted so badly to make the final and to get a chance at the podium. After qualifying, I really had to calm my nerves.”

His final run saw him finish in 106.08 seconds, as he incurred a late two-second penalty for hitting a gate. He finished 2.38 seconds away from earning a medal, which would have been the first American medal in one-man canoe slalom since Jamie McEwan at the 1972 Olympic Games in Munich.

The gold medal went to Slovenia’s Benjamin Savšek with a time of 98.25 seconds. He was 3.71 seconds in front of Lukas Rohan of the Czech Republic.

“My final run, it was an excellent run. I was happy with everything,” Lokken said. “The last upstream gate, I came into it weird and did something wrong and hit the gate and lost a lot of time on the exit. That cost me the podium.

For the sixth consecutive Summer Olympics, a Durango man represented the U.S. in mountain biking. Blevins added to a legacy that includes Travis Brown in 2000, Todd Wells in 2004, 2008 and 2012 and Howard Grotts in 2016.

The 23-year-old who graduated Durango High School in 2016 was able to move up from 32nd at the start of Monday’s race to a 14th-place finish. It was the second-best result in Olympic history for a U.S. men’s rider, only four spots behind Wells’ finish in 2012 in London.

“It was truly so fun, quite an experience,” Blevins said. “Someone slipped early in the race on the single-track, and we were all running with our bikes. You hate to have it happen so early in a race, but I kept my calm and didn’t lose that much time even though I was caught in that traffic. It helped me pace myself well and finish strong. I had the sixth-fastest last lap, so that strategy worked well for me.”

Blevins would finish the seven-lap event 2 minutes, 59 seconds behind the winning time of Great Britain’s Thomas Pidcock, who won in 1:25:14. Pidcock was 20 seconds in front of Switzerland’s Mathias Flückiger.

Blevins crashed during a practice ride the day before the race. But he was able to get good sleep and ice his back to be ready for race day and could leave happy with his performance.

“I expected all these different emotions out there for the race, but having done this so many times since I was a kid racing all over the world, I was able to stay in the moment and not focus on the magnitude of what it meant to be at Olympic competition,” he said. “Now for me looking ahead three years, I understand firsthand what I can do to be three minutes faster out there to end up with a medal.”

While Blevins was hours away from Tokyo and not able to attend the opening ceremonies, Lokken took part in the festivities and was eager to meet star athletes from around the world, including NBA superstar Kevin Durant.

“One of my goals was to meet other elite athletes and be around them and see what their passion was like for their sports,” Lokken said. “Being around those athletes who have all worked so hard to be here, it was cool to share that and know we were all here for the same reasons.”

Like Blevins, Lokken knows he has what it takes to become a two-time Olympian in Paris in 2024.

“I want to get the full experience and come home with a medal,” Lokken said. “I know what I can do is good enough, and I really am going to hunker down the next three years to give it another go and get on that podium. I know I can do it.” 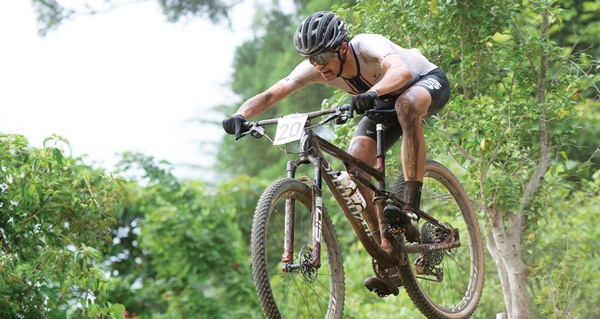 Below: Christopher Blevins soared from 32nd at the start of the race to 14th on Monday at the Olympic men's cross-country mountain bike race in Japan, the second-best finish in American men's mountain biking history./ Courtesy of USA Cycling