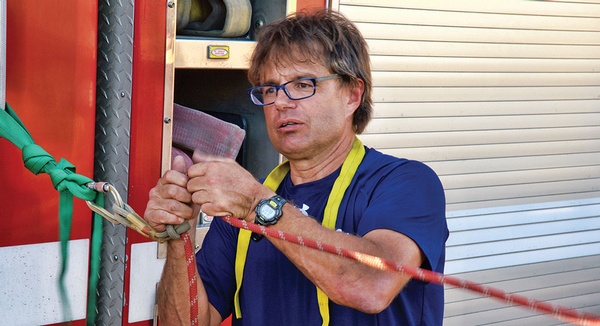 Leo Lloyd, master ropes man among other things, on one of his many rescue missions. Lloyd, a paramedic and volunteer with La Plata County Search & Rescue for more than 30 years, died suddenly last week from heart complications while on a bike ride./ Courtesy photo

Not all ski town heroes are the ones cliff-hucking or tagging first ascents. They’re not always sponsored by GoPro or attending charity galas in Aspen for the preservation of the endangered Icelandic snow owl. Some ski town heroes are actually heroes: real lifesavers for folks who get themselves into pickles in the great outdoors. Leo Lloyd III, a captain for Durango Fire & Rescue and pioneer in modern-day mountain rescue techniques, is one such hero.

The first generation of Leo Lloyds settled in Durango in the mid-1930s, but Leo III was actually raised in the Northwest. That vast, mountainous wilderness drew the intrepid youngster to seek the alpine. He learned to ski at Lookout Pass on the Idaho panhandle when he was six. Before Christmas, he’d pour over REI and JCPenney catalogs, circling gear he wanted: hiking boots, gaiters, sleeping bags.

“I wanted to be up there,” Lloyd said of the high places. “It’s just some inherent desire, I guess.”

Year after year, as he bounded for the hills, all that fresh air helped to fuel a passion that would shape Lloyd’s life along the spine of the Rocky Mountains. But it wouldn’t be the mountains of Montana that would hold his heart.

One day, he saw a brochure for Fort Lewis College in Durango, where he’d visit his grandparents each summer. In it, there was a glossy photo of the mighty San Juan Mountains. The pull was magnetic. In 1980, he moved to Durango to study biology at FLC. His grandparents were thrilled.

“I was just absolutely, completely obsessed with being in the San Juan Mountains,” Lloyd said.

On Oct. 31, 1982, as his peers donned costumes and took to the pubs of downtown Durango, Lloyd and his buddy, Jack, headed for the lofty heights of Snowdon Peak, one of many alluring 13,000-foot summits in the San Juans. For most, the approach is a straightforward day hike in the summer. But summer had passed, and the first squalls of fall had left half a foot of snow at the trailhead.

“Without knowing anything, we went straight up the Naked Lady Couloir,” Lloyd said. “Right off the bat, we were up to our thighs in snow, and it was nothing but a slab sitting on facets right down to the rocks.

“Somehow, we made it up that thing. It was late in the day, so we decided to not go back down the Naked Lady. Instead, we headed southwest across the top of the peak to another couloir that’s shorter but steeper than the Naked Lady. We dropped into that.”

As Lloyd blazed the trail, the duo plucked their way down the spicy chute. Then whumpf! The slab broke free and, like a sheet of ice on a slope of ball bearings, an avalanche sucked Lloyd into the ride of his life. He didn’t even have time to yell.

“I’m moving head-first, going Mach 2 down this couloir. I thought, ‘This is it,’” Lloyd said, recalling his efforts to stay above the snow, hitting rocks as the monster force roared 800 feet down the mountainside.

When the chaos finally ceased, Lloyd was wedged from the waist down in a pile of debris. He’d lost a glove but still had his pack. He called for Jack, turning to see his friend moaning on top of the snow, his face covered in blood. As Jack painfully bellied over to his friend, Lloyd worked to get his lower limbs free. He had no shovel or beacon or probe or avalanche training whatsoever – prerequisites for any winter alpine adventurer.

Lloyd’s wool knickers were tattered and his knee flayed open to the joint. He had a split up the inside of his thigh, and his ankle was wrecked. From his pack, he pulled out a measly first-aid kit. He noticed Jack’s wind pants were shredded and nearly off him. Then Jack mumbled something Lloyd would never forget.

“I think my intestines are coming out my back end,” Jack said.

Lloyd went into autopilot, grabbing gauze from his kit, ripping a t-shirt into strips and quickly packing Jack’s quarter-sized puncture wound. It was late afternoon, and it was snowing. No one was around. Despite Jack’s critical condition, they knew they had to crawl out as soon as possible.

Four hours later in the stormy darkness, Lloyd pulled an exhausted Jack onto his shoulders and marched the final half mile to the highway. Lloyd flagged down the only car on the road, relieved to see it was fellow college students, who took them straight to the hospital in Durango.

Jack was whisked into surgery and made a full recovery. Lloyd received 80 stitches in his knee. That scary Halloween night, he left the hospital a changed man, determined never to be “that guy” again.

He returned to his college courses with a renewed sense of purpose. In between mountain adventures, he studied molecular cellular biology, got his EMT certification and worked part-time in an ambulance. He aimed to attend medical school after graduation, and his first-aid kit was no longer pathetic. But med school was not in the cards.

“I took the MCAT three times and got rejected from med school three times,” Lloyd said. “Everything was good with my application and grades; I just never got in. After three tries, I decided that I had to do something to improve my chances.”

So, in 1987, he went to paramedic school. Around that time, Lloyd also started volunteering with La Plata County Search & Rescue and was involved in some significant technical rescues that, one by one, reshaped his career goals.

“I was creating somewhat of a niche with mountain rescue,” Lloyd said.

As he grew stronger in backcountry skills, so did his medical proficiency in pre-hospital settings through the rescues he was performing. But instead of seeing these as resume-builders to increase his med-school potential, Lloyd switched focus and decided to attend nursing school.

Upon completion, Lloyd was offered a position in 1992 as a flight nurse paramedic with the Air Care Helicopter & Fixed-Wing program based out of San Juan Regional Medical Center in Farmington. At the time, helicopter EMS was still an evolving concept in the Four Corners. The service area was huge, encompassing the massive swaths of land between Grand Junction and Albuquerque, including the Navajo Nation and the San Juan Mountains.

Less than three months into his new career, Lloyd’s flight team was attempting to land deep in the Weminuche Wilderness to rescue a possible stroke patient. Just 25 feet off the ground, the helicopter suddenly lost power and crashed, severely injuring Lloyd, his partner and the pilot. Darkness fell, and the crew huddled for a harrowing night. The following morning, Lloyd and his team (and the victim of their original mission) were rescued, living to tell a story few are lucky to share.

Reminiscent of his avalanche epic, Lloyd didn’t let the helicopter crash keep him from pursuing the high places. Rather, he served as a flight nurse for nine more years (on a new-and-improved helicopter, of course). He also picked up another anti-acrophobia gig as an instructor for Rigging for Rescue, which leads training sessions in mountainous regions across the globe.

While world travel is a highlight of Lloyd’s action-packed life, he considers his most satisfying accomplishment an endeavor he helped launch in 2002: the consolidation of the Durango Fire Protection District. For 20 years, Lloyd and the DFPD team worked to create a seamless system in which both fire and EMS worked together to give the community the highest service possible. In addition, his involvement with technical rescues, with Durango Fire & Rescue and the local volunteer mountain rescue team has ensured that both teams are trained the same way, use the same equipment, and communicate and train together. In the many mutual areas both teams serve, this has helped save lives when technical rescue is needed. This type of cooperation is something unheard of in most ski towns.

And so, the plucky kid who survived the Snowdon slide grew into one of Durango’s greatest leaders in technical rescue and team building, a savant in all things mountain in Southwest Colorado. Thirty-six years later, at a spritely 54 years young, Lloyd attained the highest honor for a mountain town idol: a coffee drink named after him. A bold order at a local shop, Durango Joe’s, the A.T.L. is a tall cup of coffee with extra shots of espresso. It stands for “Avoid the Lloyd.”

“It’s a lifesaver for a killer of a day,” says the owner, Joe Lloyd, Leo’s little brother.

But “Avoid the Lloyd” is so much more than a jolt of java; it’s also a cautionary phrase warning sippers to steer clear of situations that might lead to a run-in with Lloyd as your savior on a search and rescue mission. Repeat this mantra to yourself when you’re in the backcountry making questionable decisions.