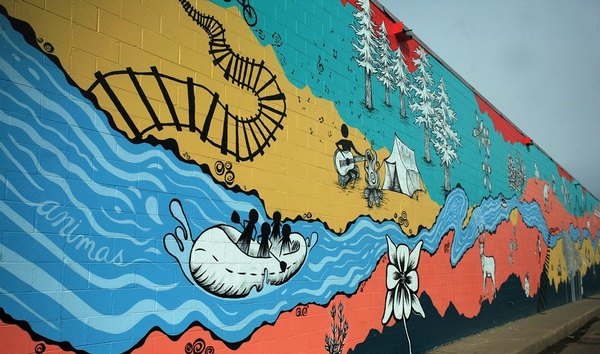 There's no doubt Durangoans love to partake in and celebrate the Earth and all our outdoor options. However, due to you know what, the city's annual Earth Day celebration will be moving online and indoors, for a week of fun, frivolous and inspiring activities, including everyone's favorite: bingo.

There’s no doubt – having an April birthday this year, just like the customary winds that accompany this blustery transitional month, blows. Of course, any birthday beats the alternative. But it has forced celebrants to get creative, with everything from Zoom happy hours and drive-by singalongs to emoji-filled texts. And it’s no different for local organizers of Durango’s annual Earth Day festivities.

In case it has slipped under your radar in favor of more catastrophic news, this year is the 50th anniversary of Earth Day. Seen as the birth of the modern environmental movement, the first Earth day was celebrated April 22, 1970. It has been celebrated every April 22 (or thereabouts) since, until … the coronavirus came to crash the party.

But local organizers, which include the City of Durango, Indivisible Durango and the Citizens Climate Lobby, are undaunted. Instead of the customary parade and day of events and Rotary Park, they decided to take the festivities online. And instead of just one day, activities will take place for a whole week (after all, you’re only 50 once.)

“We’re adjusting to our new normal here,” Gail Harriss, who is heading up this year’s Earth Day organizing committee, said. “We could not let Earth Day go by without doing something. So we are doing an Earth Day re-imagined.”

She said the group came to the realization about mid-March that the typical celebration would not be possible. That’s when they decided to go virtual. “There were at least a few other cities doing an online thing, so we looked into it,” she said. “Everyone can celebrate Earth Day while complying with the stay-at-home orders and physical distancing.”

The result is a week of online activities that anyone can participate in, from an Earth Day bingo card to a full slate of speakers sharing inspiring stories on how to make a positive difference in the community and the world.

Needless to say, this year’s Earth Day theme, “Climate Action: Healthy Choices for a Healthy Planet,” has taken on a whole new meaning as the coronavirus has dramatically impacted daily lives. And Harriss notes, the two are not completely independent of each other. In fact, noted author, doctor and public speaker on public heaths issues Dr. Michael Gregor recently listed climate change and pandemics as the two biggest threats facing life on Earth as we know it.

“So everyone needs to be addressing climate change urgently,” Harriss said.

One way people can do this on the local, grassroots level is with the bingo card. The card contains 25 spots where folks can earn bingo “chips” by doing anything from composting kitchen scraps to making an art project from household recyclables to picking up trash on a walk. Virtual cards are available online at www.durangogov.org/earthweek, and each spot contains a live link for more information on how to complete the task.

“It’s pretty amazing what resources our town has,” Harriss said. “This is a great opportunity – click on the link, and there you are.”

For example, there are links for getting started on your own veggie garden as well as a one for a foodprints quiz. (If you thought choosing chocolate over local beef was a more earth-friendly choice, you’d be wrong.)

Once you complete a bingo – or better yet the whole card – (screaming “bingo” is optional but highly encouraged), you’ll be entered into a prize drawing for a $50 gift certificate to the Farmers Market as well as gift cards from other local businesses.

Harriss is hoping that, like the Zoom and Tik Tok crazes (and not like the coronavirus), it’ll catch on.

“We’re hoping people pass it on to their friends,” she said. In that vein, anyone taking part in local Earth Week festivities are urged to share them on social media with #EarthweekDurango. (They are also looking for historical photos of early Earth Day celebrations, too, if anyone has those.)

In addition to the citywide bingo game, there will be different actions that one can take posted daily on the group’s Facebook page (Earth Week Online Durango 2020) as well as guest speakers featured on Youtube (get the link and schedule also at www.durangogov.org/earthweek.)

• Monique DiGiorgio and Taylor Hanson, of Table to Farm Compost

And for those who still love a good, old-fashioned parade, fret not. Harriss said there are plans to hold an Earth Day parade next fall in conjunction with the annual Apple Days festival. In the meantime, be sure to stay 6 feet apart out there, and if you have to hug something, hug a tree. 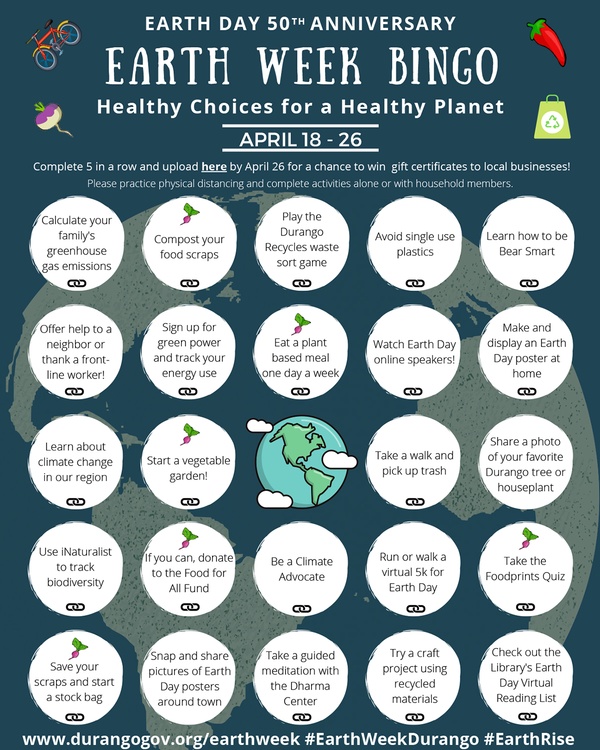