Escape from climate change
With the West in extreme drought, locals look to flee – but to where? 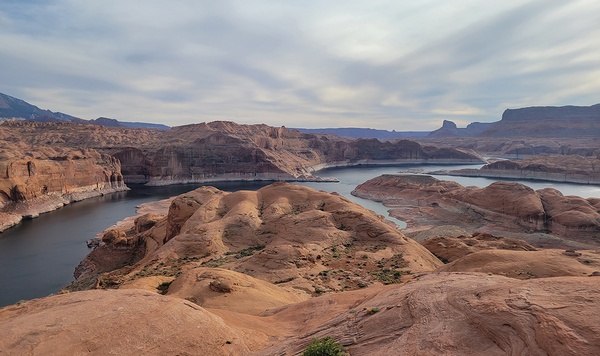 Over coffee this spring, sitting just a stone’s throw from the banks of a river already reduced to a trickle, some friends of mine told me they were preparing to escape from Western Colorado. It’s too dry, they said, too vulnerable to the effects of climate change.

That was in April, before all hope had been lost for a little reprieve from the dry winter – something, perhaps, to renew my friends’ faith in the habitability of my Homeland. Relief never arrived.

Now the entire Western Slope of Colorado is in severe, extreme or exceptional drought, as is the case in Utah, Arizona, Nevada and a good portion of New Mexico. “Notable impacts include increased wildlife encounters in California, Nevada and Utah, as drought has driven snakes and/or bears in search of food and water into urban areas in those states,” notes the National Drought Mitigation Center in its weekly summary. “Drought-stricken ranchers are selling cattle due to poor forage conditions and a lack of feed. On top of this, grasshoppers have been denuding trees and competing with cattle for food.”

Irrigation ditches are being shut off, depriving farmers of their life-blood long before their crops are ready to harvest, prompting some to throw in the towel. Colorado wildlife officials are asking anglers to refrain from fishing certain stretches of river because the water is too warm for non-native rainbow and brown trout. The Animas River through Durango is running at less than half its normal flow for this time of year, and the water temperature reached 68 degrees in early July and surely will keep climbing. The water temperature in the Dolores River – or what’s left of it – as it joins the Colorado River is a whopping 85 degrees (upstream a little ways, at Bedrock, the river is bone dry).

Lake Powell is rapidly shrinking due to low inflows, rising demand and crazy levels of evaporation – more than 17 billion gallons per month. It should hit the record low level, set in 2005, in a matter of weeks, if not days. Brad Udall, a climate and water researcher at Colorado State University and an expert on the Colorado River, expects the reservoir to lose 5 million acre feet of water this year, dropping perilously close to losing all hydropower generating capacity.

It’s no wonder, then, that my friends want to flee. I asked them where they would go. The Northwest, they said, which at the time seemed reasonable. Yet in the ensuing months, even that one-time refuge from aridity and heat has fallen victim to warming temperatures. The heat wave that hammered that region recently left hundreds of people dead and killed billions, literally, of sea creatures. Now the entire Northwest is in drought, too, along with an unprecedented 93 percent of the West.

Heat waves have always happened, of course, even in Oregon and Washington. Yet this one was a doozy, a once-in-1,000-years sort of event. And it would have been “virtually impossible” without human-caused climate change, according to a recent analysis by a global team of 27 scientists. They go on to conclude: If global warming continues at its current pace, which is likely, heat events of this magnitude could occur every five to 10 years – as early as 2040.

If not the Northwest, then where? I might suggest the only place I know that could use a heat wave or two: Silverton, where the high temperatures rarely surpass 85 degrees, even these days, and where it can drop down to nearly freezing, even in July. Plus, it’s near the headwaters of the Animas River, meaning the residents should be just fine, water-wise.

Or maybe not. It turns out that Silverton’s founders weren’t all that conscientious and thereby failed to secure water rights back in the town’s early days. As a result, the town’s rights to its drinking water supply is “junior” to those of many downstream users. So if the river drops low enough – and it surely will sooner or later – the senior downstream users can force Silverton to shut off its intakes. There is no escape, it seems.

And who benefits from this? The same fossil fuel companies that helped get us into this mess in the first place.

Hydropower generation capacity shrinks along with reservoir levels, and reservoir levels are at record lows in California, diminishing hydropower by 37 percent from 2020. Meanwhile, electricity demand soars alongside temperatures as folks crank up the air conditioners to stay comfortable – and alive. In order to fill the growing abyss between power supply and demand, grid operators turn to natural gas. When burned for power, natural gas emits carbon dioxide; and when it is extracted, processed and moved, methane – a potent greenhouse gas – is emitted, contributing to global warming.

Meanwhile, as demand for natural gas shoots up, so do prices. And when natural gas prices climb, coal power becomes more desirable, from an economic standpoint, for utilities. Even though dozens of coal plants have shut down and the industry is in decline, coal consumption is ticking back up this year.

But at least two utilities will have a little less coal power to choose from as the next heat wave grips the Southwest. Late last month, a cooling structure at San Juan Generating Station in northwest New Mexico suddenly collapsed, taking one of two of the plant’s units offline indefinitely.

Public Service Co. of New Mexico, the operator of the plant, would not confirm the collapse for more than a week, according to NM Political Report, which first broke the story. That silence is odd given the significance of the failure: The entire structure, which is 400 feet long and 75 feet wide and made up of a series of low towers, completely crumpled, slashing the plant’s total generating capacity nearly in half.

Perhaps it doesn’t matter that much. After all, the collapse occurred exactly one year before the plant is slated to shut down for good. PNM eventually confirmed the collapse, and told the Farmington Daily Times they were working diligently to repair it. But you’ve got to wonder: Why bother spending all of that cash on something that’s going to be useless in a matter of months?

The collapse is yet another hurdle in the path of Enchant Energy’s quest to take over the plant and keep it running so it can spend billions to equip the already economically unviable plant with carbon capture. Just weeks ago, the firm acknowledged that it had failed to meet critical benchmarks and therefore planned to run the plant without carbon capture for years, trying to sell the polluting power as a merchant operator. But even that would require competing with a growing number of solar installations for space on high-voltage transmission lines, securing water rights and finding customers to purchase the power (PNM has said it doesn’t want any coal power, whether it benefits from carbon capture or not).

That one unit can go down without setting off alarms at either PNM or Tucson Electric Power, the unit’s co-owner, shows that they’ve already acquired enough resources to keep the lights on without the plant. That does not bode well for Enchant. If the plant is not needed during these times of high demand, when will it be?

The Land Desk is a thrice-weekly newsletter from Jonathan P. Thompson, longtime journalist and author of River of Lost Souls, Behind the Slickrock Curtain, and the forthcoming Sagebrush Empire. To subscribe, go to www.landdesk.org.?