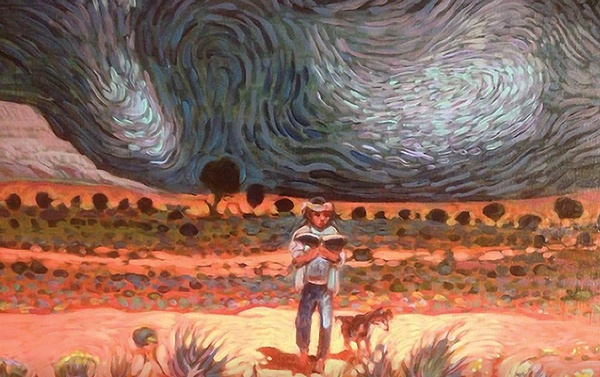 "With Glowing Words" by Shonto Begay

Several years ago, Connie Jacobs was teaching a class at San Juan College, in Farmington. She had just finished a section on Luci Tapahonso, the Navajo poet laureate at the time and one of the more well-known published Navajo writers, when one of her students approached her after class.

“A young Diné man came up after class and said, ‘I didn’t know there were Navajo poets,” Jacobs recalled.

As a boy attending high school near the reservation, he had learned about what Jacobs likes to call the “great whites” – Hemingway, Fitzgerald and Faulkner – but not about the plethora of gifted writers and poets from his own home, the Navajo Nation. 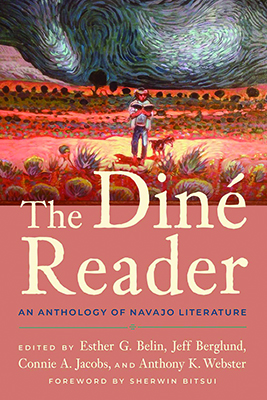 Jacobs, who taught for several years at Fort Lewis College as well as SJC – where one-third of the student population is Native – knew things had to change. Sure, there was already quite an impressive catalog of Native American literature. But a collection solely devoted to the writings of the Navajo, or Diné as the Navajo people call themselves – the largest Native American tribe in the United States – was nonexistent.

That’s when the dream for an anthology of Navajo writings was born. More than 10 years in the making, the dream recently became a reality: The Dine Reader: An Anthology of Navajo Literature, came out last month. Published by the University of Arizona Press, the 409-page comprehensive collection contains poetry and prose from the first nationally published Navajo writer, Blackhorse Mitchell, to earlier voices like Nia Francisco and Grey Cohoe, to contemporary writers like Sherwin Bitsui as well as emerging young writers. In all, the Reader includes contributions from 33 Navajo writers, poets and artists.

“The Diné Reader is unique in that there are no other single book collections of the writing from one tribal nation,” said Jacobs, who co-edited the book with the help of fellow academicians Esther Belin, Anthony Webster and Jeff Berglund.

As Jacobs recalls, she had discussed the idea first with Berglund, a professor at Northern Arizona University in Flagstaff, which also has a large Native and Navajo student population. He, too, had noticed a similarly troubling trend: a dearth of teachings on Navajo writings, despite an abundance of good Navajo writers. From there, the two enlisted the help of mutual friend, Belin – an established Navajo poet in her own right, whose first book of poetry, From the Belly of My Beauty, won the American Book Award in 2000. A second-generation off-reservation Native American, Belin grew up in California but now lives in Durango, where she taught at FLC and now teaches for the Low Rez MFA program at the Institute of American Arts in Santa Fe.

Belin then brought Webster on board, a linguistics anthropologist. From there, the four put their heads together, trying to figure out how to structure the book and – more importantly – who to include.

“It was not an overnight process,” said Jacobs. “We have this whole range. We found so many other poets we would have loved to include but couldn’t because of length.”

In the end, the book ended up taking a chronological approach to writers, starting with an excerpt from Miracle Hill: The Story of a Navajo Boy, the 1967 seminal work from Mitchell (who attended boarding school in Ignacio). The book also includes an introduction written by Belin, following the arc of Navajo works written in English. Although the Diné have been handing down oral stories for generations, the written word – in English – is a relatively recent phenomenon that started with the forced re-education of Native American children in Indian boarding schools beginning in the late 1800s. In fact, poetry was often used as a way to teach English to the students, and the government even compiled the poems into periodicals to chart its re-educating “progress.” Although much of those works have been lost, the book contains a few of the early anonymous poems:

If I were a pony

I would run away from school

And I’d gallop on the mesa

And I’d eat on the mesa

And I’d sleep on the mesa

And I’d never think of school

Belin said the native Diné language is lyrical with many poetic and literary devices already in use, which helped facilitate Navajos writing poetry in English. She points to the example of lesser-known Diné poet Henry Tinhorn, who learned to wrote poetry while attending boarding school in Utah in the late 1970s despite the administration’s reported misgivings that “Indian kids can’t write sonnets.” Tinhorn’s, and other students’ works, went on to be published in the now defunct journal Arrow.

“That’s the significance we really want people to know – that Navajo people have been writing poetry and using the English language poetically, which is really what people would consider a higher order of using language,” Belin said. “They’ve been creating, crafting and weaving into it content that was reflective of their culture and experiences.”

She said that although a lot of the early works center on the boarding school experience, the genre expanded from there, taking in everything from politically active writings during the Civil Rights movement to today’s young writers, who approach it more intentionally. And that variety is something she and the other editors sought to capture with the book.

“We were pretty particular in creating an array of styles, topics and content,” she said.

In addition to the writings, the book also includes a timeline of important dates in Diné political and literary history as well as resources for educators to include more Navajo writings in their courses. The latter is something important to Belin – it is her hope to have more classes offered in creative writing and Navajo literature offered to Native students, something she said is already in the works at Diné College and other regional colleges. She also dreams of a day where more Natives are not just attending college, but teaching the classes – particularly the ones on Native literature.

“Of all the courses offered, Native studies is the only one where it’s acceptable to have the majority of people teaching it non-indigenous or non-Indian,” Belin said. “I get it, our population is so small, but we just need more people coming in and/or allies trained in ways to teach it.”

Jacobs agrees and said she believes that time is coming. Already, there is talk of hosting special events on the book at SJC, FLC and NAU. She points to the young Diné student all those years ago, Byron Aspaas, who had never known about Navajo poets – and now is one himself. Not only is his work featured in the Reader, but he will accompany Jacobs and Belin for a virtual reading and Q&A on the book April 22 in conjunction with Maria’s Bookshop.

“We’re really just warming up,” Jacobs said. “Our point is to get the book out so people can see how valuable it is and to encourage young Diné people who may not know that they can be a writer.

“Our dream is to have this just be Volume I – there are so many good writers that have been left out and so many emerging writers.”

The Diné Reader is available at Maria’s Bookshop. To learn more about the book, go to: uapress.arizona.edu/books. 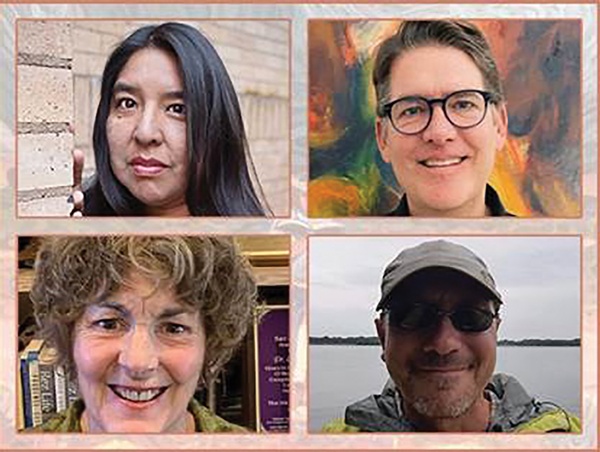