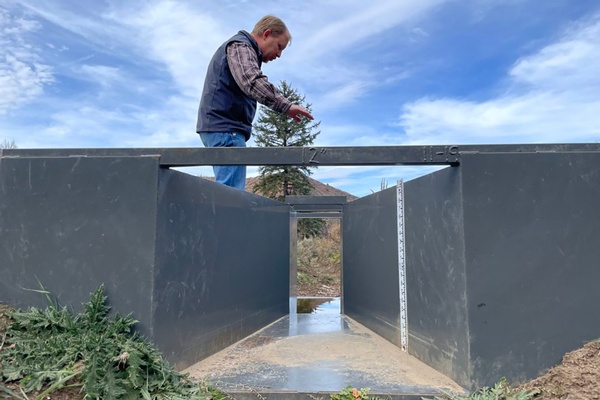 Colorado water managers are making more people track and report how much water they’re using, as decades of drought have diminished supplies on the Western Slope.

For the first time, the state is also pushing for new rules that spell out how some rights-holders should measure their water use as each drop of Colorado River water becomes more valuable.

Kevin Rein, director of the Colorado Division of Water Resources, presented the rules to a full house at Jackson County’s event center in Walden. The center, usually used for rodeos and 4-H agricultural clubs, was filled with farmers and ranchers concerned about their water.

The state’s proposed rule would dictate how the farmers and ranchers in northwest Colorado would need to measure the amount of water they use. That includes types of measurement devices, how they’re installed and verified and how users would record and report their usage to the state.

Colorado has a state statute that gives water managers the authority to require water measurement if there’s a need, but the law is vague and doesn’t specify how that should be done. The new rules could change that for users in water Division 6, which includes the Yampa, White and North Platte river basins.

The audience started to ask questions: Why is this happening now? And why are these rules needed here? One rancher wanted to know why the rules don’t apply to the whole state.

Rein explained that historically, there’s been plenty of water in northwestern Colorado, so there was never a need to make people measure their water use.

Now, with a warmer climate, those sources are becoming less reliable. The Yampa River and the White River both produce less water than they did 20 years ago, and both of these rivers feed into the Colorado River.

As the state makes water users in northwestern Colorado measure their usage, officials are also introducing new regulations on how those measurements should be made.

The rules haven’t been finalized, but state water planners hope to develop standards that generate more consistent and reliable measures to get a more accurate picture of how water is being used. And the plan eventually is to have similar rules across the Western Slope.

“There’s a lot of value in measuring the water use on the West Slope,” Rein said. “It demonstrates to the most accurate degree how we use water in Colorado.”

Much of the water on the Western Slope feeds the Colorado River, on which more than 40 million people rely. Colorado is part of a 100-year-old agreement, called the Colorado River Compact, to share this water with six other states and Mexico.

If it ever comes to a point where Colorado can’t send enough water downstream to meet those obligations, state officials need to know where all that water is going.

“The urgency for these rules is good, accurate water administration to the benefit of Colorado water users,” Rein said. “And good, accurate data if there is a compact compliance obligation in the future.”

That data could be crucial if downstream states make a legal complaint that Colorado and other upstream states have broken the agreement and aren’t keeping enough water in the Colorado River, which is drying up from climate change, drought and overuse.

Lake Powell and Lake Mead, the two largest reservoirs in the U.S., hit their lowest levels on record this summer. Each one is filled with Colorado River water.

At his family’s ranch outside of Steamboat Springs, Todd Hagenbuch stands next to a creek where he recently installed equipment to measure his water use.

Hagenbuch, a Colorado State University Extension agent in Routt County, said he’s glad he now has a way to prove that he’s putting his water to use, which is required to hold on to water rights. Hagenbuch said it’s important to have such records before there’s any legal dispute over Colorado River water.

The new headgate in Hagenbuch’s creek opens to let water into the pasture’s irrigation ditch. A metal box measures how much water is making its way onto his land. Right now, opening that gate does nothing.

“My measuring box has been dry for quite a while, because Morrison Creek has dropped to the point that even with my new headgate I can’t get water,” Hagenbuch said.

Southwestern Colorado is hurting from decades of drought and Routt County is currently experiencing extreme drought conditions as well.

In 2018, the state had to cut off some water users on the Yampa River for the first time, which triggered the orders requiring water measurements for all users in Division 6. Accurate water measurements are needed to help settle local water disputes.

“Things do seem to be getting warmer and drier. And that being the case, there’s just more pressure on the limited water we do have,” Hagenbuch said. “And anytime you have scarcity, you tend to have more rules.”

Hagenbuch understands if some farmers and ranchers feel like the proposed measurement rules are heavy-handed since the state statute was enough until now.

But, he says some clarity could be helpful, as long as the rules strike a good balance between what the state needs and what works for water users.

For more from Colorado Public radio, go to www.cpr.org