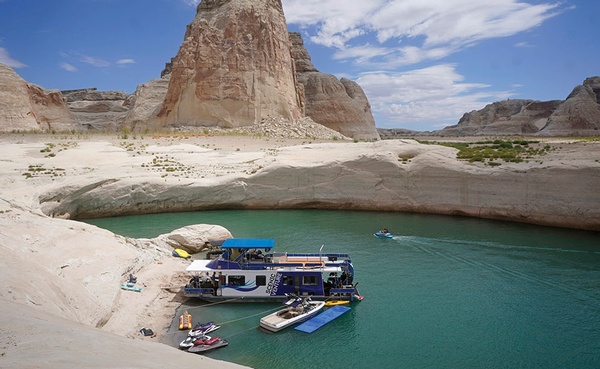 In this July 30, 2021, photo, a houseboat rests in a cove at Lake Powell near Page, Ariz. Federal officials announced that will keep hundreds of billions of gallons of Colorado River water inside Lake Powell instead of letting it flow downstream to southwestern states and Mexico. The move will allow Glen Canyon Dam to continue producing hydropower while officials strategize how to operate with a lower water elevation./ Photo by Rick Bowmer/AP Photo

The U.S. Bureau of Reclamation announced Tuesday emergency plans to protect Lake Powell on the Utah-Arizona border by holding back water releases to downstream states.

The reservoir has plummeted to its lowest level on record amid more than 20 years of record-breaking drought in the Colorado River Basin. On Tuesday, Lake Powell’s water surface elevation was at 3,522 feet, its lowest level since being filled in the 1960s. A critical elevation at Lake Powell is 3,490 feet, the lowest point at which Glen Canyon Dam can generate hydropower. According to the bureau, this elevation introduces new uncertainties for reservoir operations and water deliveries because the facility has never operated under such conditions for an extended period.

As a result, the agency for the first time has moved to delay a release of water from Lake Powell that normally goes to Arizona, California and Nevada. Instead, the federal agency will keep more than 480,000 acre-feet of water in the reservoir to prop up supplies to protect hydropower production.

The combined nearly 1 million acre-feet added to Lake Powell is intended to help protect the reservoir and its infrastructure over the next 12 months. Tanya Trujillo, Interior Assistant Secretary for Water and Science, said the action gives operators more time to figure out how to run Glen Canyon Dam at lower water levels.

Trujillo said the move to hold water in Lake Powell was an “extraordinary action.”

“We have never taken this step before in the Colorado River Basin, but the conditions we see today and the potential risks we see on the horizon demand that we take prompt action,” she said at a Monday press conference.

Lake Powell, the country’s second-largest reservoir, is fed by a Colorado River storage system that supplies water and hydroelectric power to millions of people across the West. Climate change is contributing to a steep and rapid decline in the available supply of water.

In a separate action announced last month, upper-basin states worked with the Bureau of Reclamation on a plan to send another 500,000 acre-feet to Lake Powell from Flaming Gorge Reservoir on the Utah-Wyoming border under their drought response agreement for the year. A similar action was taken last year when water from Flaming Gorge, Blue Mesa and Navajo reservoirs was sent to Powell because of drought and dropping levels.

Trujillo said the 30 Native American tribes in the basin were consulted, as were the states and partners in Mexico that also rely on the Colorado River. Trujillo said the agency received “consensus support” for these actions to protect Powell.

“We all have to find ways to maximize efficiency and use less water,” she said.