Feelin' fabulous
Sharing the fabulousness within, if only for a few hours through drag 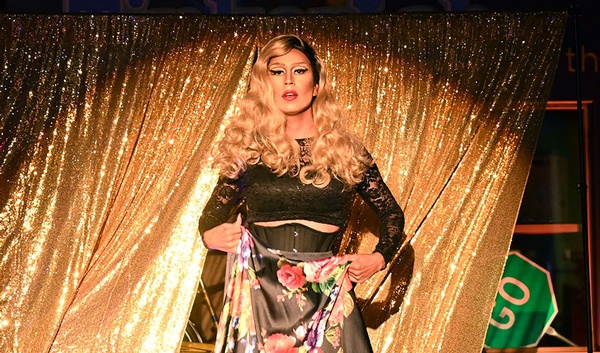 What makes us want to reach beyond the boundaries of ourselves? Is it laid within the foundation of being human, this search for the point beyond the horizon? How do we decide where this horizon is? Perhaps it is decided for us when we’re children.

Like any child, I found myself gravitating to the things I found most interesting. “Fabulous” would have been the word I used if I knew what it meant or even how to pronounce it. I didn’t understand it at the time, but there was just something about the 2-inch gold pumps my mother had stored away in her closet that held my attention more than many of my other toys.

I was fortunate enough to live in a household where my family knew about this fascination – and instead of berating me, they chuckled. My first moments of stardom were in those gold heels on our brick fireplace in the living room, where I could become, for just a moment, anyone I wanted.

But the world we live in does not exist safely in my family’s living room. As I grew older and interacted with more people both inside and outside of my home, I began to assemble a crude blueprint of who I was expected to “be.” A boy who was supposed to like sports and only cried if they were hurt on the field. A boy who shunned looking beautiful for looking sharp. A boy who, most of all, did not wear his mother’s gold heels. I felt the need to apply this blueprint to myself, no matter how bad I was at doing so.

My parents knew, before I did, that I would probably never have a “love for sports” the way my father or older brother did. So instead, they changed their focus. “Come home with all A’s, and I’ll take you into town this weekend for a video game,” my dad would tell me. He reiterated the importance of school throughout my life, and I obeyed. But this quest for good grades and the approval of my parents always felt lacking – like I had forgotten to add salt to a dish or bring a towel to the beach. Little did I realize what I had forgotten – myself.

I had grown into adulthood with this feeling of something missing in my heart. That was until 2019, when I decided to enter the local drag competition and fundraiser, “Dragrango.” Created in 2016 by the Four Corners Alliance for Diversity, people of all ages and genders are invited to participate in the competition, where a Ms. and Mr. Dragrango are crowned. I experienced this event for the first time as an audience member in 2018 and found myself wanting to be onstage. So when the sign-ups began for the next Dragrango, I added my name to the list.

After spending hours preparing my look and performance, the night of the competition finally arrived. Strangers were going to see me at my most vulnerable, and that frightened me. But what I didn’t realize was the audience was not made up of strangers. It was actually made up of “family” – members and allies of the LGBTQIA+ community.

When I was onstage, something clicked. The story I wanted to tell became more important than the nerves in my stomach. The makeup and clothes became the keys to open the connection between the audience and myself.

That year, I did not win. However, something that had felt oppressed for so long burst forth. For the first time, I became a walking embodiment of the femininity that had long lived within me. It felt scary and exciting. It felt liberating and cataclysmic. But most of all, it felt authentic and celebrated.

Dragrango would not occur again until 2021 because of the pandemic. Among so many fabulous performers, the chance of winning felt slim, so I changed my expectation. I wanted to connect with the audience again. After a year of being isolated and fearful of sharing space with one another, connection felt more important than ever. In the end, I was crowned Ms. Dragrango 2021.

I’ve been asked if it feels like wigs and makeup act as a mask. Another person suggested that doing drag was a way of becoming something I’m not. To that, my response is this: Superman is more himself when he is in his cape and suit. He hides himself as Clark Kent, trying to blend in with us behind a shirt and tie. But when Superman is in his cape, he is the truest representation of himself. This is how it feels for me when I am Rita. For a few hours, I get to share the fabulousness that lives within me.

That said, there are probably as many reasons someone does drag as there are people who do drag. I asked Aluna Del Rey, the winner of 2018 Ms. Dragrango, why she does drag. Del Rey said, “I get to live my dreams and get to show others while doing it. (I’ve learned) that I’m more capable than I thought and that I got to believe in myself more.”

In its sixth year, Dragrango will happen at the Durango Arts Center this Sat., March 26. There will be performances by contestants and past winners alike, myself included. Hosted by local drag alien and artist Aria Pettyone, this year’s Dragrango is one to not be missed. We hope you will join us in celebrating the journey these performers have taken to bring us a night full of artistry, laughs and love.