Finding Kylo
How to catch a husky? Trail cams, rotisserie chicken and lots of patience 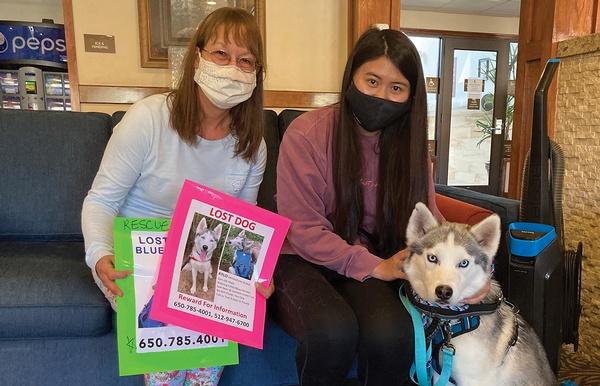 Local dog finder Kim McRae, left, and Kylo, the husky, and owner Joyce Zuo, of Austin, Texas, reconnect at the Durango Comfort Inn on Tuesday. After being spooked by a mountain biker on Junction Creek on July 22, young Kylo went on the lam. With the help of McRae and several others, Joyce was able to find Kylo, who was living up near the Tech Center, and coax him back to civilization on Monday, nearly three months after he went missing. (And no, the vacuum cleaner was not on.)/Photo by Missy Votel

If you’re sick of depressing news, here’s an uplifting story for a change. It involves a girl and her dog, and a miraculous, tear-jerking reunion. But first, the heartbreak. We can’t guarantee it won’t make you cry (but in a “Lassie Come Home” and not an “Old Yeller” kind of way.)

But first, the heartbreak. Three months ago, Joyce Zuo, a 27-year-old financial advisor from Austin, Texas, was visiting Durango. She and her 9-month-old Siberian husky, Kylo, and some friends had just spent a week knocking out some hikes around Silverton. They were camping at Junction Creek and decided to take one last, short hike on the Colorado Trail the morning of July 22 before heading home.

Kylo (named for a “Star Wars” character) is Zuo’s first dog. She had adopted him in May from a shelter in Austin where his previous owners had surrendered him, as well as several of his siblings. Needless to say, in his first few months with his first owner, Kylo received little in the way of socialization. As a result, with Zuo, there were many firsts for Kylo: first car rides, first hikes, first runs. And first mountain bikers.

It was the latter introduction that didn’t go so well. As anyone who’s ever had a husky knows, they can be skittish – like giant cats, but with longer legs and insatiable wanderlust. Being new to the outside world, Kylo was especially jumpy.

“Some mountain bikers came riding down, and he’d never seen a mountain biker before and pulled on his leash, the leash snapped and he ran off,” Zuo recalled.

Maybe it was the lycra, the helmet or the funny glasses, but Kylo bolted, setting off a three-month odyssey – or dogyssey if you will.

Zuo and her friends hung out around Junction Creek for a few more days, hoping the dog would eventually return. She reached out to San Diego-based dog rescuer Babs Fry, who instructed her to stay in the same place and leave out some of her “scent items” – a polite term for dirty socks, T-shirts and skivvies. And, going against pretty much anything anyone with a lost dog has ever done, Fry also advised her not to call for the dog or try to chase him, which can spook a scared dog even more.

Zuo posted to the La Plata County Lost and Found Pet Facebook page and canvassed the nearby neighborhoods with flyers. Despite all this, Kylo refused to show, and Zuo had to get back to work. She left Durango heartbroken and dogless. Within days, a small posse of volunteers, made up of Kim McRae, Sasha Stauffer and Maya Tei Aurichio, joined the mission.

“I live near Junction Creek trailhead and Joyce left a flyer in my mailbox,” said Tei Aurichio. “I contacted her and said I would be happy to help out.”

For Tei Aurichio – who has no dog of her own but has lots of “dog friends” – this was her first dog-finding mission. “I just thought, this is something I can actually help out with. There was just something special about Kylo and Joyce.    You could tell how much she loved her dog.”

McRae, a more seasoned dog-finder with about six missions under her belt who heard about Kylo on the FB page, echoed that. When Kylo first went missing, she was working on finding another missing dog in La Plata Canyon, but there was something about Kylo. “I just took a special liking to him,” she said.

Perhaps it was that Kylo, while cute as the dickens, was also wily as one. According to McRae, after 48 hours of being out in the wild, dogs begin to lose their domesticity and “flip” to fight or flight mode, interpreting anyone and anything as a potential predator. Add this to Kylo’s already shy nature and he was as elusive as Bigfoot himself.

“He was a stealth little mother, good lord,” said McRae.

Fortunately, dog finders have new tools in their arsenal: trail cams and group texts. Each time a tip would come in about Kylo, Zuo would text the group and someone would go out and set up a camera (McRae owns several) in hopes of catching him. If footage showed him turning up at the same place and at the same time every day, they would know he had settled into a routine and commence doggie drag net.

Only thing is, the tips started coming in from all over, from Turtle Lake to Rockridge to the Tech Center.

“For all we knew, he could find someone on the Colorado Trail and hike his way to Denver,” said McRae.

The women set about knocking on doors, asking residents if it was OK to set up cameras on their property in the hopes of spotting Kylo, possible near a pond or creek. And somewhat to their surprise, the answer was always a resounding yes.

“We weren’t sure if they were going to chase us off, but everyone was ready to help,” said Tei Aurichio.

Alas, although Kylo was spotted on a few people’s doorbell cams, he never showed up on any of the planted cams. Zuo even returned to town for a week in September in the hopes of finding him, to no avail. And then, everything went silent.

“At times, it was hopeless,” said Zuo. “I thought maybe by then he had become one with the mountains and wouldn’t want to come home.”

But Fry and the other women didn’t give up. And finally, last week, a sighting came in from a dog walker in the Tech Center. She had begun to see Kylo during her morning and evening walks, and others had noticed him as well. The cameras were set, and the women noticed he had taken up residence on a ridgel near the old city dump (because what dog wouldn’t?)

The three women began leaving food and water out for Kylo, who would show up like clockwork every day at 7 a.m. and 7 p.m. At the recommendation of Fry, Zuo drove back to Durango on Sat., Oct. 17, hoping to catch him for his 7 p.m. dinner. She arrived (with dirty socks in tow) just as it was getting dark and sat down near his bowl, where Fry instructed her, via phone, to sit quietly, and not to look him in the eye or approach him. But darkness fell, and after a few hours, Zuo called it quits for the night – but she was not alone.

“When I left, I shined the light from my phone and saw him up on the hill,” she said.

Zuo was back at it bright and early Sunday morning, holding vigil starting at 6:30 a.m. Slowly, she was able to coax Kylo closer and closer by tossing him kibble and rotisserie chicken, and of course acting like she was completely uninterested, a sort of dog reverse psychology.

He warmed up to her “un-advances,” but still was not so sure. Fry urged Zuo to be patient, and she returned yet again Monday, for a third day. And that’s when the “Dances With Wolves” moment happened: Zuo put some chicken in her hand, and Kylo came up to eat out of it. He was still 2 feet away, so she tried to lure him closer. Eventually, after a few hours, she was able to get close enough to slip a lead over his head. It was at this point that Kylo was close enough to smell and recognize her.

“I finally secured him and he jumped on me and started licking my face,” Zuo said.

As of Tuesday, Zuo and Kylo were resting comfortably in the Comfort Inn (duh). They both got baths – Fry had advised Zuo not to shower during the “recapture” – and Kylo was looking surprisingly good for a dog having gone through a 90-day ordeal. He even was still wearing his bright blue Ruffwear harness, which by now was a bit tight since he had grown, turning a year old during his time in the Durango hinterlands.

“He’s super skinny, but from the looks of it, he’s done pretty well for himself,” Zuo said Tuesday.

The plan was to visit the vet – Kylo somehow managed to chip a canine during his adventure, get re-acquainted and then return to Austin next week. Once home, Kylo will 1) get neutered, and 2) get a higher fence.

And while Kylo’s not talking, Zuo said she, for one, is extremely grateful for the outpouring of help from Durango. “I’m really thankful, Durango is such a tightknit community,” she said. “Kim, Maya and Sasha really supported me from the first day, and I had a lot of other people reach out.”

As for the dog sleuths, they say it was all just in a day’s work– and a welcome reprieve from current world and national affairs.

“It was a pretty rewarding thing to be a part of,” said Tei Aurichio, who credits Kylo’s survival to the very thing that made him so hard to find in the first place. “That skittishness is what kept him alive. He spent most of the time hiding out. He’s a tough little bugger.”

As for McRae, she also welcomed the distraction from the news cycle. “It’s really a story of hope and perseverance and dedication. Good things are happening, and people do want to help each other,” she said. “We have compassionate, animal-loving residents. This is a very good area to lose your dog in. I don’t recommend it, but if you do, it’s a great community.” 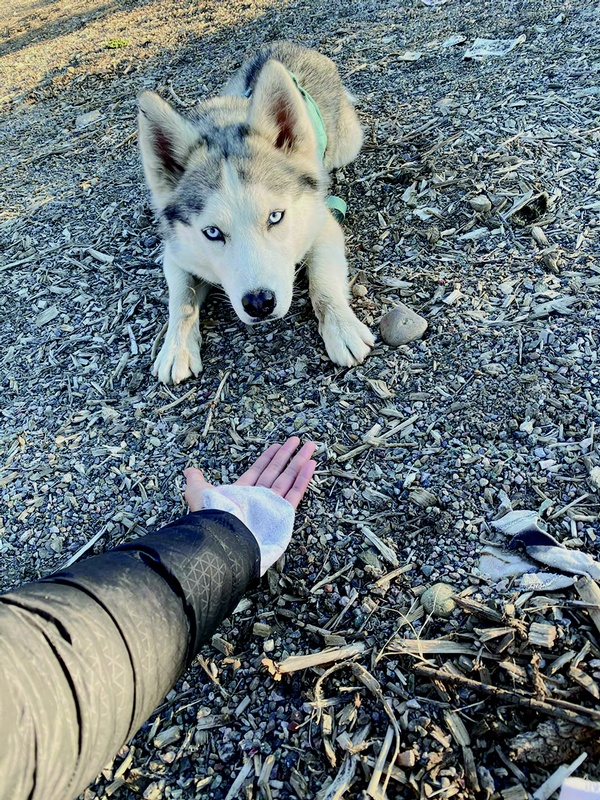 Zuo extends her hand to an unsure Kylo. Zuo spent three days patiently sitting at the Tech Center, waiting for Kylo to warm up to her so she could place a lead on him./Courtesy photo