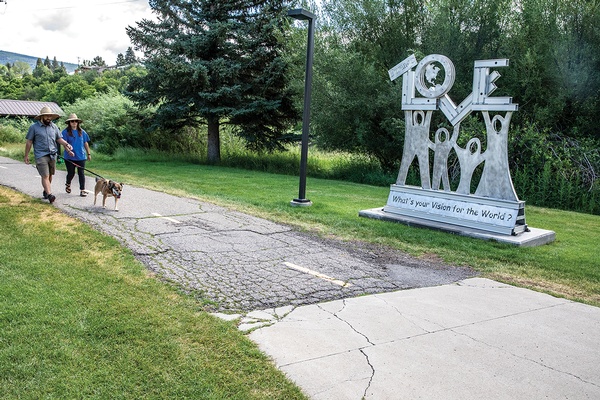 Dogwalkers make their way along the Animas River Trail behind Rank Park on Wednesday. The City will be tackling this section of the popular thoroughfare next, replacing the worn-out asphalt with more resilient concrete./Photo by Stephen Eginoire

Decades ago, the Animas River Trail was envisioned to become the centerpiece of the city of Durango’s trail system, both for recreation and commuting around town. Now, those efforts are on the verge of realization.

Following on the heels of the long-awaited connection of the north end of the trail to Oxbow Park & Preserve last year, the City of Durango has planned over the next few months some finishing touches for the popular travel corridor.

This summer, construction is expected to start on a multi-million dollar pedestrian bridge at 32nd Street, which will effectively remove the last crossing that requires River Trail users to contend with car traffic.

Then, later this fall, the deteriorating asphalt section of trail between Rank Park and the Demon Pedestrian Bridge will be removed and replaced with a wider, upgraded concrete path.

And, finally, by 2023, the lofty vision to link the south end of the Animas River Trail to the Smart 160 Trail, connecting the city of Durango to the burgeoning Three Springs area to the east, should start to become a reality. Once finished, people will be able to ride from Oxbow Park to Three Springs, a more than 10-mile journey, uninterrupted.

“It’s been a long time coming,” Anthony Savastano, who serves on the city’s Parks and Recreation board, said. “I can’t think of too many towns that have something that expansive. It’s a remarkable thing to have accomplished.”

The earliest sections of what would become the Animas River Trail started in 1976 when city crews installing sewer and water lines took the occasion to lay down a trail segment from 29th Street to Demon Bridge.

In the years following, more sections were added as opportunity arose, such as the strip from Demon Bridge to Rank Park in 1979, and Highway 160 to Santa Rita Park in 1980. But these efforts were significantly accelerated by a 2005 and 2015 sales tax increase dedicated for recreation projects.

Following the Animas River, the trail is inundated daily with walkers, joggers, cyclists, commuters, anglers, and rafters and kayakers, as well as people just enjoying a picnic along the river banks. In essence, it comprises a whole smorgasbord of Colorado outdoor activities. A recent survey found an estimated 95% of Durango 4  residents use the trail on a regular basis, both for commuting around town and for recreation.

“It’s absolutely fantastic to have that there, for sure,” Tom Knopick, co-owner of Duranglers Flies and Supplies, said. “It’s easy to pull into the river trail, walk up or down, and have at it.”

Time has taken its toll on some sections of the trail, however.

Asa Robbins, general manager at 2nd Avenue Sports, said years ago, a particularly rough patch south of Santa Rita Park was like a whoops section on a mountain bike trail, making for a sort of a rollercoaster ride (tip of the hat to editors who mountain bike and help reporters with such lingo).

“It was almost a fun, technical section of the river trail, which seems ridiculous,” Robbins said. “But for cyclists in general, yeah, I’ve had friends complain about  those sections. As a commuter path, it’s necessary for it to be smooth, especially at night when it’s easy to crash.”

Cathy Metz, longtime Parks and Rec director who calls it a career on Friday, said asphalt doesn’t handle wear and tear well over time. Eventually it starts to crack, which is why the city converted to using concrete years ago.

“We’re basically tackling one section at a time,” Metz said.

Just last year, another problem segment along Iris Park was similarly upgraded. One of the oldest sections of the trail, from Rank Park to Demon Bridge, this fall will be widened from 8 feet to 10 feet, and replaced with concrete.

And within the next five years, the city intends to remove and replace the last few remaining asphalt sections on the trail, namely Highway 160 south to Santa Rita Park, and from Demon Bridge north to 29th Street. This project would also include a complete replacement of Demon Bridge.

“The Animas River Trail and upgrades are a priority (for the city), and we try to balance that with new trail extensions,” Metz said.

It appears the last of the major construction projects are on the horizon, too.

In fall 2020, the city of Durango completed a nearly $6 million extension, providing 1.3 extra miles of the trail from 32nd Street north to Oxbow, which includes a 38-acre wildlife preserve and a boat ramp to the Animas.

Next up on the list is the at-times contentious project for a pedestrian route around 32nd Street, the second-busiest road in Durango.

Originally a three-part, $4.1 million bridge, the city of Durango scaled back plans after significant public pushback questioning the need of the project and the amount of money to get it done. Even still, city officials and some members of the public maintained it was a matter of public safety to remove conflicts between trail users and traffic on the busy street.

Ultimately, the city settled on an alternate plan, purchasing a $710,000 property on the north side of 32nd Street to make way for a scaled-back $3.4 million pedestrian underpass.

“I don’t think we understand how at-risk people are (when riding bikes) adjacent to a car,” Mary Monroe, spokeswoman for Durango Trails (formerly Trails 2000), said. “And the car is always going to win.”

Whether for or against, the new bridge will remove the last existing pedestrian-road crossing along the Animas River Trail.

Get out of the car

More than 20 years ago, Monroe said Trails 2000 brought together a number of stakeholders to plan for a connection from the Animas River Trail to Three Springs, seen as the next area slated for substantial growth. The goal, this time, was not so much recreation as it was creating multimodal community.

“Getting people out of their cars and around town is an important element to growth and sustainability for Durango,” Monroe said.

Commuting between Durango and Three Springs – which is home to one of the region’s largest employers, Mercy Regional Medical Center – is only expected to increase in the coming years. This will be especially true with the rise in popularity of e-bikes, said Tim Zink, asset manager for GR Properties Group, the developer of Three Springs.

“We’re excited about the options (the extension) could bring to connectivity,” Zink said. “I think it’d be a cool Sunday afternoon ride from downtown to Three Springs and grab brunch. But I think there’s more potential for actual commuter traffic.”

By 2023, the city hopes to start the 2.6-mile connector. Once complete, it will be a major milestone for all those who envisioned such an asset to the community. But that doesn’t mean the effort for trail connectivity is over. A project to to link downtown Durango to the trail via Camino del Rio is also under way.

“You can’t look at the Animas River Trail as a singular thing,” Savastano said. “It’s a pretty amazing component and connector to a lot of different parks we have. It serves as the spine and a lifeline to greater communities.” n