Fire station, round two
Residents rally round petition to call for public forum 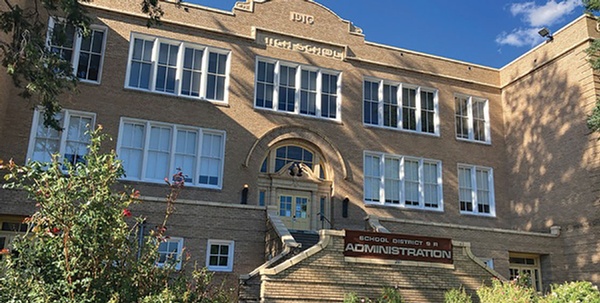 A petition is going around town that would require a public forum should the Durango Fire Protection District submit plans to convert the old 9-R building into a new fire station./ File photo

Desperate for their voice to be heard on the proposed new fire station in downtown Durango, a group of residents have started a petition that would call for a public forum to air their concerns.

“As it stands, there has never been a public forum or the opportunity for the public to ask questions and receive answers,” Greg Hoch, who is part of Citizens Voice Durango, which is organizing the petition, said. Hoch also served as the City of Durango’s Planning Director for 35 years, retiring in 2016. “It’s rather simple what we want.”

For years, the Durango Fire Protection District has searched for a permanent location to serve the downtown area, with its current facilities near the Powerhouse Science Center out of date and in disrepair. To complicate matters even further, the land, located at 1235 Camino del Rio, is owned by the City of Durango.

Last summer, DFPD made a shocking move when it announced it was going to purchase the 9-R Administration Building on E. 12th Street, next to Buckley Park, for a new emergency services center. DFPD, for its part, has said those plans were kept under wraps because the purchasing process was competitive.

Regardless, since those plans surfaced, a contingent of residents has launched a concerted opposition group to the proposed project, arguing the already-congested area would increase response times to emergencies, adversely impact Buckley Park and create a host of issues for adjacent neighbors.

Also from the beginning, a number of residents have felt the public was not given a proper opportunity to weigh in on what impact a new, massive emergency center in the heart of downtown would have on the city. Previous informal meetings or City Council hearings, Hoch said, limited public comment, and residents felt like their concerns fell on deaf ears.

“We have been asking for a public forum ever since September, and we’ve been denied it,” Hoch said. “This petition does not stop the city from ultimately approving the fire station. It simply says city ordinance would require a public process to get there.”

It’s government jargon, the kind of stuff that makes the Average Joe’s eyes bleed, but at its core, the petition makes a simple request: If DFPD applies for a permit or submits an application for construction on the 9-R site, the process would require a public forum, no matter what. (We won’t get into it here, but there are several ways in which DFPD’s application may not be subject to a full review that would require a public forum).

Also, it should be noted, the petition would change city code to apply to all fire and police projects, and is not site specific.

The petition needs 768 valid signatures by April 27 from registered voters who live within Durango city limits, a number based on a percentage of residents who voted in the last election. If the petition is validated, the requested tweak in the city’s ordinance could be passed by city councilors at their May 17 meeting. Or, city councilors could decide that day to put the matter up for a vote sometime between Aug. 2-9.

As of this week, Hoch said the petition had more than half of the required signatures. The problem, however, is many signatures are invalidated because people who sign put down the wrong address, write illegibly, don’t live within city limits or aren’t registered to vote. With one week left, Hoch realizes the clock is ticking, and organizers in the coming days are planning to hit the streets, go door-to-door and attend local events.

“If someone wants to sign, we will come to them,” he said.

Since DFPD closed on the sale in December to 9-R for $5 million in cash and nearly $2 million of in-kind services, it’s unclear where the fire district is in its process of planning and submitting plans for remodeling or construction on the site. Fire Chief Hal Doughty and DFPD board president Kathy Morris did not respond to requests for comment on this story.

The Durango Telegraph covered this situation in-depth in its Oct. 28, 2021, issue, but for those of us whose minds have been irrevocably warped in recent years, here’s a quick reminder.

DFPD has been at its location along Camino del Rio, known as River City Hall, since 1983, which at the time, was seen as a temporary fix until a permanent location was secured. But over the years, the effort lost momentum – all the while, the building has fallen into disrepair and can’t meet the district’s current needs. The fire station, for instance, doesn’t even meet fire codes.

About five years ago, Doughty revitalized the effort, looking at 32 sites around town. Yet, whether over costs or properties being too small, nothing worked out. It appeared some momentum was picking up to redevelop the current River City Hall site, but Doughty said on record newly elected city councilors in 2019 were not in favor of that route, saying it was his impression the city had other plans in mind for the location. Those city councilors, for their part, have denied opposing any plan to keep DFPD at River City Hall.

So when DFPD quickly put a bid together this past summer for the 9-R building, it took the community by surprise, to say the least. “We decided it was upon us as a fire district to take matters in our own hands,” Doughty said at the time. “I felt like I was sneaking around trying to spend taxpayer dollars in secret, but I was in a competitive process and felt like there was a need for confidentiality. So we kept it quiet until 9-R announced the successful bidder.”

Cart before the… fire truck?

All along, the main complaint from residents is that DFPD did not conduct studies on the front end to determine whether the 9-R site was a viable location.

To-date, there has been no evaluation on response times, traffic studies, impact to neighbors, etc. Doughty has said the fire district had been burned in previous instances spending thousands on studies, only for the site to fall through.

So what if plans ultimately don’t work out? Doughty said previously that would be a “travesty,” but the property would still be easy to resell. In recent comments made, he has doubled down on the 9-R site, not interested in renewing talks on redeveloping River City Hall or looking into other properties.

Durango Mayor Kim Baxter said in an interview other properties, such as city-owned property on Camino & College (currently part of the D&SNG parking lot), should be considered before moving ahead at 9-R. “We didn’t even know (DFPD) was going to (buy 9-R),” she said. “There are other options.”

As of this week, Baxter said City Council has not seen any plans from the fire district. Doughty has mentioned in the past that collaboration may be possible with Durango Police Department, which is seeking its own new location, but that is still in the early phase, Baxter said.

Baxter, for her part, said the entire situation has highlighted the need for better communication between different agencies and governments in town. She’d also like to see community members on DFPD’s board. As for the petition, she is in favor of making the process for a new fire station as transparent as possible.

“Because of the significant impact this project will have on the downtown area, it should go through a public process,” she said. “I think the public has the right to not just speak up at a fire district hearing or come to City Council for public comment, but for a full hearing.”

This story was updated to clarify the petition would change city code to apply to all fire and police projects, and is not site specific.