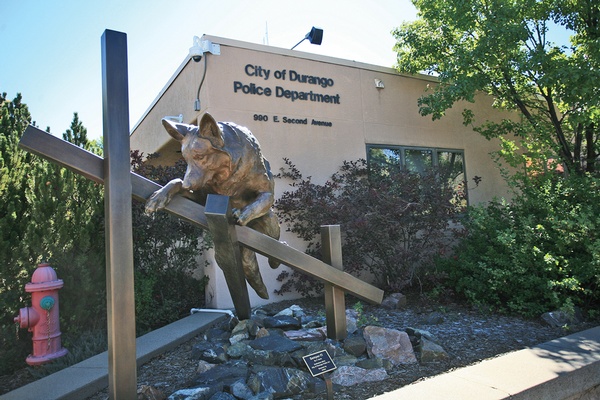 The Durango Police Department's current home was originally a 1950s car dealership. It became a shared police and fire station by 1969. Then, in the 1980s, it was dedicated as a police department. One thing that hasn't changed is the available space inside. Today, the department is struggling to fit within its walls, using closets as offices and Zircons as evidence lockers./Photo by Stephen Eginoire

In less than three weeks, ballots will start arriving in mailboxes across the state. This year candidates battle for seats in the U.S. Congress, the state Legislature, county offices and the Colorado governor’s mansion. There’s statewide ballot measures on redistricting, fracking setbacks, hemp production, state taxes and more.

In the Southwest, Bayfield is looking to increase taxes to pay for library needs and asking voters if they want to lift the ban on retail marijuana. Durango residents will also consider a tax increase, but it would pay for public safety and maintenance. Then, of course, there will be the usual long list of local and state judges.

With all this to digest – especially in the fog of modern day campaign craziness – The Telegraph will spend the next few weeks tackling each topic and talking to candidates. Our efforts to cut through the election haze begin this week with the City of Durango and taxes.

What’s on your ballot?

It’s called Question 2A. In this lengthy ballot measure, the city of Durango is asking voters to approve a tax increase that would sunset in 25 years and be used to pay for a handful of city services like police, fire and rescue, and street maintenance.

So what does that mean for voters’ wallets? And, what will they get for their money?

When it comes to the wallet, the mill levy would raise someone’s property tax about $40 for every $100,000 of a home’s actual value. For example, a house in Durango worth $500,000 would see an increase of $194 per year. For a commercial property worth $1 million – which has a higher property tax assessment ratio than residences – the increase would be $1,566 per year.

As for the sales tax, the current rate in Durango is 7.9 percent. This includes a state tax of 2.9 percent, a county tax of 2 percent and the city’s 3 percent. With an additional .55 percent for the city, the rate would go up to 8.45 percent.

And, what would all this pay for?

The answer is police – a new station, additional officers and equipment. It also would cover the city’s contract with the fire department, pay to fill potholes, repave city streets and perform other needed road maintenance. It would go toward improving the city’s stormwater issues, putting in ADA ramps on sidewalks, fixing alleyways and hiring another code enforcement officer. In addition, the funds could be used to repair and maintain some of the city’s buildings – like fixing leaky roofs at City Hall or making better use of the old library on E. Second Avenue

“It is not sexy, but it is needed,” City Councilor Melissa Youssef explained in an email. “We are talking about investing in our core foundation and the essential framework of our public works and facilities ... It is about maintaining what we have to sustain our quality of life and the character of our town.”

The campaign’s catchphrase is “Back to Basics.” It was chosen because the funds raised from Question 2A would be used to pay for basic city services – police, fire and rescue, street maintenance, and code enforcement.

According to City Councilor Dick White, about half the residents who responded to a recent city survey were not even aware of the fact that the city wasn’t able to fund some of these basic services – like the police station or street maintenance.

Take the Durango Police Department’s current home – which was originally a 1950s car dealership. It became a shared police and fire station by 1969. Then, in the 1980s, it was dedicated as a police department.

One thing that hasn’t changed over the decades, though, is the available space. At this point, closets are being used as offices and Zircons as evidence lockers. Even if the city could afford to hire the additional officers it needs, there would be no place to put them.

Durango Mayor Sweetie Marbury called it a “Crackerjack box,” adding that the situation is dire. “We anticipate growth in our community, and we have to be able to provide a safe environment for our police men and women,” she said.

Then there’s the streets. In this year’s city budget, as an example, $658,000 was put aside to repair, repave and add sidewalks to Thomas Avenue in the Needham neighborhood on the north end of town. The bids, however, came in at more than $800,000. It was the only road maintenance project on the calendar, and it had to be shelved.

The proposed road maintenance budget for next year – without any funding from 2A – is zero. According to City

Manager Ron LeBlanc, the city really needs to be putting $2 million to $2.5 million a year into maintenance.

“Tax increases are not popular and the timing is unfortunate with the 416 Fire,” Youssef explained. “That said, I think most individuals and businesses recognize ... we have immediate needs for street improvements and facility upgrades that will only get more expensive with time.”

So far, there is no official campaign in opposition to Question 2A; however, residents have raised questions. One of the most common is: “Why can’t the city just use money from other things, like trails, open space or retail marijuana permits?”

The reason is, it’s not in the same funding bucket.

Similarly, previous tax increases can only be used to pay for things listed on the ballot.

For example, the half-cent Parks and Recreation tax, renewed by voters in 2015, can only be used on parks and rec items like Oxbow Park, the Animas River Trail or Rec Center.

It was a guarantee to voters that these funds had a specific purpose, and the same is true for Question 2A. If voters approve the measure, those funds can only be used for the things listed in the ballot question and nothing else.

During last year’s annual budget undertaking, city staff realized that in just a couple of years, Durango’s expenses would outpace its revenues. General inflation, rising utility costs and the like would start taking a larger and larger piece of the city’s pie.

While revenues – primarily sales taxes – are also likely  to go up, they will not climb fast enough to keep pace. In fact, the shortfall is only expected to get worse every year. City officials tagged this particular predicament a “wicked problem,” meaning one with no simple solution. Something has to give, they warn. Either expenses will have to be cut or revenues increased.

With this wicked problem, city staff hit the road to ask residents what they wanted to do about it. The public outreach included more than 50 meetings, hundreds of surveys and thousands of comments.

“We heard overwhelmingly that (residents) wanted us to maintain what we have,” Amber Blake, assistant city manager who also headed up the outreach effort, explained.

City Council ultimately chose to go with the combined approach of a sales and property tax increase on the November ballot. According to council members, it puts the weight of supporting basic services on residents and visitors – both of whom use them.

If the measure passes, the city will be able to use the revenues to pay for all its public safety needs. The process for finding the Durango Police Department a new home, designing it and building it can begin. The potholes can start getting filled, the gutters repaired and Thomas Drive will finally get some sidewalks.

If the measure does not pass, Marbury said, they’ll likely try again. But she thinks it will because, she said, residents know how important it is to invest in their city.

“All these things need to be taken care of,” she added. “I have faith city residents will see the needs and vote ‘Yes’ on 2A.”

Ballots go in the mail Mon., Oct. 15. There will be drop-off boxes in several spots across La Plata County in the following weeks and plenty of places to go for help. For the latest election information, contact the County Clerk and Recorders office at co.laplata.co.us or 382-6296.

For more on the city’s ballot measure, visit www.durangogov.org and click on the “Ballot Initiative 2A Fact Sheet” or the “City Streets: Pavement Condition Index.