Four legs to stand on:
Furniture as Art raises creative support for KDUR 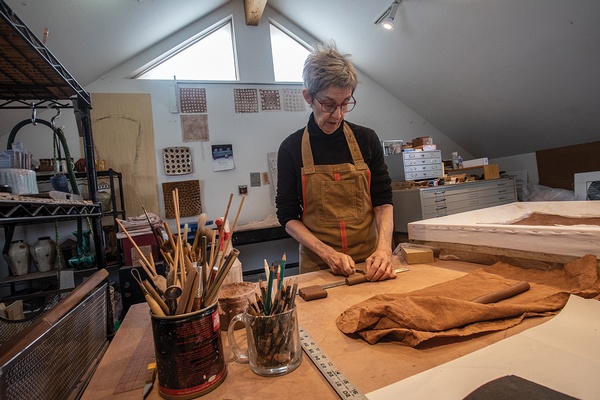 Monet mastered oil paints. Michelangelo marble. Virginia Woolfe was a wordsmith. And Durango artists are about to show off their formidable skills in working with home furnishings. And it’s all for a good cause: as it does every year, proceeds from the Furniture as Art auction will benefit KDUR, the community radio station housed at Fort Lewis College.

As far as eclectic fundraisers go, the premise for Furniture as Art is pretty straightforward: artists make, decorate, convert and morph entirely functional pieces of furniture, which then go to auction at the Durango Arts Center. Proceeds benefit KDUR, and auction winners go home with one-of-a-kind pieces.

Only, Furniture as Art isn’t your typical art auction. At least, not if Christie’s is your idea of a typical art auction. There’s good reason that Furniture as Art is an annual happenin.’ It’s been providing entertainment and furniture in equal measure for going on two decades now. And in a town that values annual traditions and festive parties, it’s become a mainstay of the arts and fundraiser circuit.

In fact, contributing artist Lisa Pedolsky called it the “most raucous” KDUR fundraising event of the year. Considering that KDUR Cover Night also comes once a year (this time in mid-March featuring the Talking Heads), that’s  seriously saying something.

“The energy on stage is amazing,” Pedolsky, a clay artist represented locally at Diane West Jewelry & Art, said. “It’s live entertainment, with an unlikely group of people. Calvin Storey, the strapping cowboy auctioneer, shows up in full regalia with his rodeo belt buckle and cowboy hat. He has wry humor and plays off whoever the other KDUR folks are on stage.”

Other long-time participating artists, such as tattooer Tom Kipp and sculptor and painter Amy Felker, talked about the inevitable bidding war on at least one item, the jokes going on between auctioneer Story and his wife, Pat, working the audience, and the usual boisterousness that happens when you feed a community heavy appetizers and drink tickets.

All in all, it’s pretty action-packed for an auction. And if live bidding isn’t your cuppa, there’s a silent auction too,  with lots of donations that aren’t necessarily furniture: gift certificates, gift baskets, radio schwag, and so on.

Of course, it’s the art that doubles as furniture that ostensibly brings people through the door.

“This is something that’s marked on the calendar weeks ahead of time,” Kipp said. “You see the creativity. Year after year, I always like seeing what people bring to the stage, whether it’s a newcomer or someone whose piece I look forward to seeing because I love their style. It’s a joy to see actual, functional pieces of art.”

For Felker, whose work can be seen in the window at No Place Like Home on Main Avenue, half the fun of the event is finding her canvas for each year’s artwork. When the event used to be held later in the year, she’d comb the alleys during spring cleanup looking for the perfect discarded table or chair. Now, she’s surfing the thrift stores, and she’s found something out of the normal to push her creativity for the auction.

“You can get some really awesome pieces that you can redo, repurpose and put back out there and make some money for KDUR, which is the best part of all,” she said. “I’ve never bought a new piece. My piece this year, I have kept with that. I’ve done thrones, I’ve done tables. Usually Day of the Dead has something to do with it. This year, it’s a mirror.” (Spoiler alert: it has adorable dogs all over it.)

Furniture as Art is a welcome change of pace from  he always-necessary pledge drive week. KDUR could hold a simple art auction where artists donate pieces and everyone eats small cubes of cheese. But instead, the station has kept with the artistic constraint of making functional furniture art.

Art often emerges from limitations. Having the challenge of creating furniture keeps artists like Pedolsky energized.

“I love a prompt,” she said. “It helps the wheels start turning. Being an artist, I immediately want to think outside the box. How can I work it to my creative advantage, comply with the theme of the show and run with it?”

A prompt like furniture could hardly be more removed from Kipp’s daily art. He owns Conductor Tattoo and spends his days inking people. But for Furniture as Art, he turns to wood, which he says is akin to skin.

“The prompt is there to have that motivation, to be able to do something,” he said. “A lot of what I choose to make is out of necessity. I want something, like a shelf or a spice rack, and I like the idea of making rather than buying. So a lot of times, what I’ll put in (to the show) is something that I wouldn’t mind having at my own house.”

Working with the challenge of making furniture also helps each of these artists grow as creatives. Kipp credits his annual creation with helping him build more skills and become a better artist. It furthers Felker’s innate passion for making crazy things out of everyday objects. And it helps Pedolsky feel connected to the greater world outside her studio.

“It’s an artist-slash-personal growth experience,” she said. “I get to come out and really feel what it is to be part of the community, the KDUR community and the greater community.”

In the end, those communities are what this night is all about. Sure, it seems like public radio stations are always raising funds. In fairness, they have to in order to stay afloat – stations like KDUR do not air commercials, meaning listeners get more of the music and programming they tuned in to hear in the first place. Furniture as Art reminds artists, art lovers and radio listeners alike of the reasons why the community in “community radio” is so important.

“Public radio is the voice of the people,” Felker said.

KDUR serves as a political, artistic and musical resource for Durango and beyond. Essentially, the all-volunteer DJs curate information and insights through their own knowledge, experience, perspective and preferences. Shows aren’t mediated by sponsors (though plenty of local businesses underwrite programs on the station), so the airwaves broadcast genuine expression. And listeners reap the benefits.

Pedolsky said that the talk shows on KDUR feed her mind while she is working in her studio. Kipp, who also hosts a late-night music show once a week, loves the constant change that’s built into a radio station that works on the collegiate semester model.

“Some (shows) stay static, and they’ll be the same for years to come, they have been that way for years in the past,” he said. “I love the fact that it changes, though. You’re going to get different variety and maximum variety. Yet the people who contribute to this station really know what they’re doing, and they love to share that with the community. There is no other radio station like this that I have ever experienced.”

Felker feels the way many of us feel when our favorite stations ask us for money: we aren’t made of cash. But she finds that participating in something like Furniture as Art allows her to contribute to her artistic community by offering her talents and her time. Guests can participate even without bidding, for a ticket price that bests most any night out on the town. And everyone gets to leave feeling more connected to the station, and to each other, than when they arrived.

“It’s just passion, and the heart, that it is real people doing real things, making a real difference,” she said. “Even if you don’t get a piece, you go away with something.” 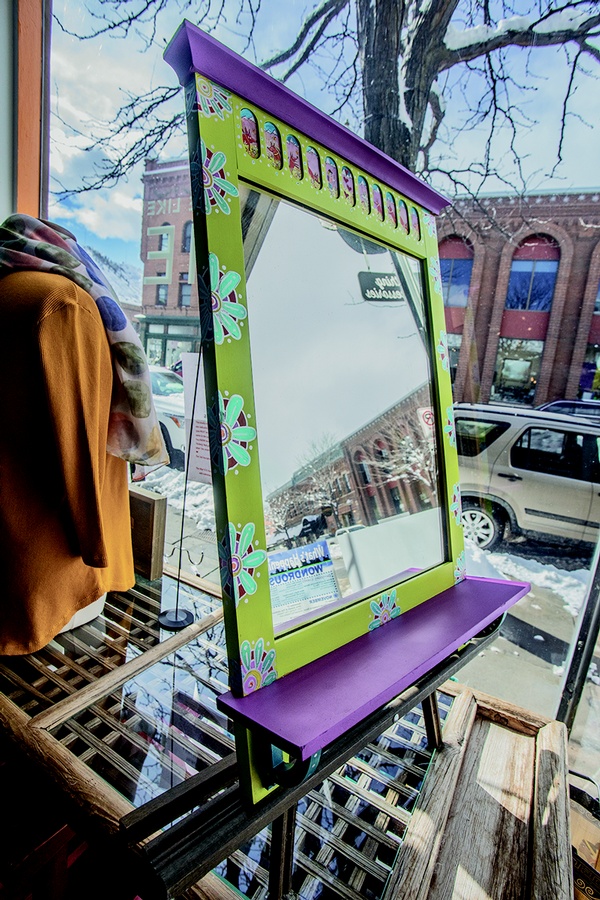 A mirror by Amy Felker sits on display in No Place Like Home. The mirror will be up for auction next week at Furniture as Art./Photo by Stephen Eginoire