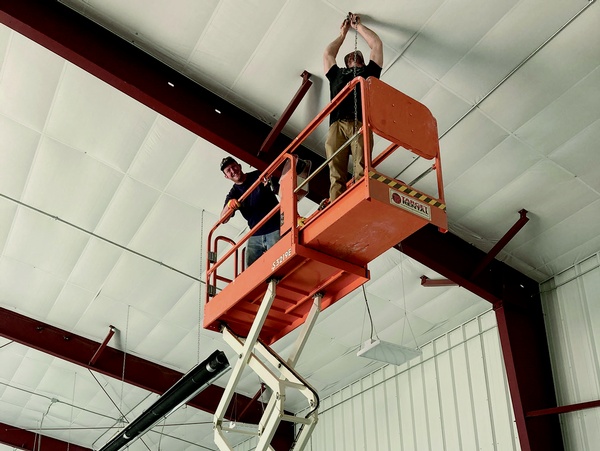 Rock climbing is rarely thought of as easy. Challenging yourself is kind of the point. Maybe that’s why two local climbers decided to tackle an equally daunting task: opening a new climbing gym in Durango.

Husband and wife Sebastiaan Zuidweg and Laura Chase are gearing up to open Gravity Lab, an indoor climbing gym on Highway 160 west of town.

Although both Laura and Sebastiaan could be considered ambitious – in life and in climbing – neither of them would describe the process of opening a climbing gym as easy.

In fact, when the couple moved from Crested Butte to Durango in 2019, they had no idea that they’d one day be opening a gym. However, when Durango’s previous climbing gym, The Rock Lounge, closed in 2020, leaving local climbers without a community hub and training center, Zuidweg and Chase jumped at the opportunity.

Or maybe it was more of a slow tip toe followed by a blind leap into the abyss. Both Zuidweg and Chase had backgrounds in the healthcare industry but had never owned a business. Gravity Lab was started on crumbs of ideas and bravery. Even though climbing gyms are growing in popularity, that doesn’t mean they are becoming any easier to build and successfully open. Climbing gyms can be challenging to finance, with buildings typically requiring a lot of construction, and local and state ordinances can present unexpected obstacles.

Despite the challenges, Zuidweg and Chase knew it was meant to be when they found the perfect location – a former manufacturing warehouse.

“All of a sudden, what was once a pipe dream for us became a reality when we found an amazing property, and we found ourselves in a position thinking that maybe we could afford to do this,” Zuidweg said.

It was important for Zuidweg and Chase to own the property for their climbing gym. They said many gyms close because of rent increases or the sale of the buildings. Such was the case with The Rock Lounge, which closed after its building sold. Zuidweg and Chase also wanted to be able to build as much as they wanted – or as much as permitting would allow – without having to worry about a landlord saying no or having to move locations in the future.

But, once they found the perfect building, there were more obstacles to overcome.

“There are a number of agencies involved in working toward approval,” Zuidweg said. “When we purchased the property, we needed to coordinate with every entity to make sure the use and intent of our project met each entity’s needs and expectations.”

For example, the Colorado Department of Transportation required the climbing gym to provide an alternative entrance and fund a study determining how much traffic Gravity Lab would produce. The couple also had to perform studies to determine the gym’s impact on the sewer system and whether or not their well water was safe for consumption. And even though water met requirements for safe drinking, they were still required to add a chlorine filter system. Add to this fire codes, electrical systems, land easements, neighbors and financing.

“We actually experienced a bank denying our loans based on the fact that they just couldn’t get comfortable with the … uniqueness of the climbing gym business model,” Zuidweg said.

Despite the challenges, including supply chain delays of construction materials, Gravity Lab is shooting for a fall opening, at which point they will face a new mountain to scale: running a climbing gym.

He banks on the idea that the Gravity Lab will be less of the traditional gym experience and more of a community gathering place for lovers of the outdoors. He plans on sharing the space with other climbing-enthused entrepreneurs and simply, anyone who wants a place to go where they can be with friends, meet future climbing partners and share their love of climbing.

This article is republished from Startup Colorado, an organization that supports rural entrepreneurs. See the original post at www.StartupColorado.org