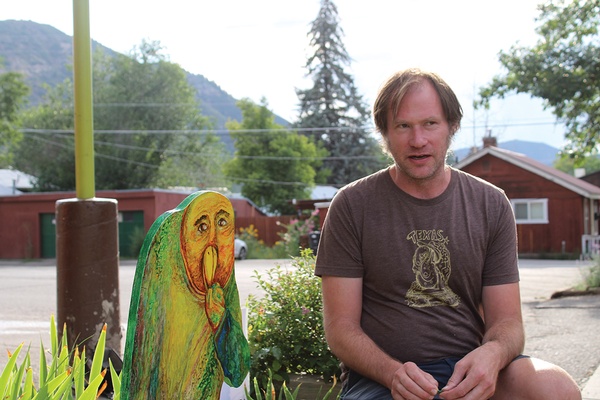 Artist Dan Groth, who probably needs no introduction, talks about his new art installation, "Dream Garden" outside Durango Natural Foods, where he works. The pieces, inspired by fairy gardens, went up in July with the help of the Durango Art Brigade./Photos by Jessica Pace

Durango Natural Foods shoppers might have noticed the bright pops of color peering from the overgrowth of chives at the store’s entrance since July. This colorful tableau is local artist Dan Groth’s “Dream Garden,” an installation of four two-sided acrylic paintings that have brought some of his trademark bizarre humor to the storefront.

One day last spring, Groth, a co-op employee, was standing behind the cash register, looking out through the front doors, at the empty garden bed in front of the store. It was April, in the middle of the city’s Spring Cleanup, which equates to a smorgasbord of material left in alleys and on curbsides for the thrifty artist. Groth salvaged some composite boards and had them cut into random shapes with the intention of painting one side of each completely differently from the other – a sort of exercise in using the left side of the brain.

Groth started on the project without a complete vision for the outcome but knowing he wanted to create a series of figures for a garden setting. “Sometimes I have to sort of reverse-engineer my theme – start working on something, then connect it to a theme after the fact,” he said.

The result was a motley group loosely inspired by fairy gardens, the miniature dioramas that can be found nestled at the base of trees and in yards around town. Though Groth’s paintings seem unrelated, they somehow look very much like they belong together. A skeptical-looking mollusk-like creature, a green humanoid, a beaked owl-man and, of course, a reimagining of David Hasselhoff are just a few of the co-op’s new garden dwellers. Some are conceptually vaguer, including a robot-esque shape with Russian pronouns in reference to the language Groth spent much of the COVID-19 shutdown studying.

Though the medium is a deviation from the stippled pen-and-ink drawings Groth is probably best known for, the images themselves are clearly his style, depicting the seed of a realistic idea that spirals off into the abstract in dream-like puddles of color. To a passing motorist on College Drive, the paintings, at first glance, might give off the impression of whimsical tombstones.

As he said in his artist’s statement, Groth wanted to produce something “that would give passersby pause, create puzzlement, bemusement and/or entertainment” and took a stream-of-consciousness approach to the paintings.

“It’s not abstract expressionism; you can look at each of those pieces and make out what it probably is,” he said. “But I was trying to access the subconscious a little. I don’t go after a specific result. I’m not good at realizing an idea exactly as it initially was. It changes, kind of like looking at a cloud.”

Dream Garden is Groth’s first public art project, and the insecurities that come with displaying one’s personal work in such a communal, heavily trafficked location inspired some comical, if unlikely, speculation about public perception.

“I just have these intense fantasies of the (co-op) manager saying, ‘You know, I just don’t think these are right. We need to take them down.’ And having to go out, pull all the pieces up. I have a vision of me just throwing them all in the dumpster.”

Diffidence aside, Groth is happy with the outcome. The pieces were created poetically in step with the easing of pandemic restrictions and the public’s tentative reintroduction to social life after a surreal year of isolation.

“They came about during this very intense time: masks were coming off, places were reopening. I think this is a really dystopian sort of period. I was initially kind of worried about them turning out too weird,” Groth said. “But I’ve gotten used to doing what I want to do. And if you put anything in a natural setting, it’s going to look pretty good.” 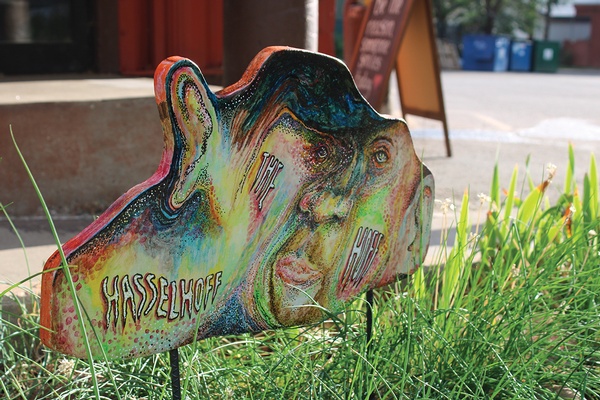