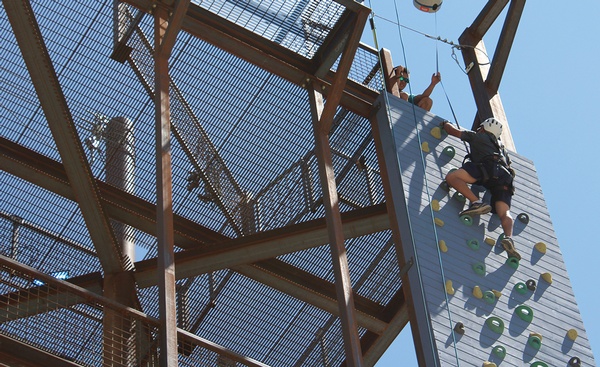 Tico Time River Resort, located between Durango and Farmington along the banks of the Animas River, offers a variety of camping, outdoor adventures and live music. Long-term owner Robert Holmes hopes the resort becomes one of the premier attractions in the Four Corners./Photo by Jonathan Romeo

You may have seen the brochures hyping high-adrenaline adventures. Or maybe you have seen the ads for concerts and music festivals galore. And you, like many people around town, may be asking, “What is Tico Time River Resort?”

But perhaps the more fitting question is: what isn’t Tico Time River Resort?

Nestled about halfway between Durango and Farmington, just on the New Mexico side of the border off U.S. Highway 550, Tico Time is a topsy-turvy mix of adventure park, campground, live music venue, basecamp for the outdoors and lounge chair mecca – a sort of free-for-all summer camp for adults and kids alike.

In sum, pretty much anything owner Robert Holmes, 39, wants it to be.

“Already there’s nowhere like it in the world,” Holmes said. “And we’re just getting started.”

Holmes and his wife, Jenny, started buying the property along the Animas River destined to become Tico Time around 2018. Almost immediately, the resort began taking on a life of its own.

The COVID-19 pandemic, however, hamstrung live music and events in 2020. So this year, Tico Time is busting out of the gates, hosting a blitz of concerts and music festivals, magic shows and fireworks displays, hoping to become one of the go-to destinations in the Four Corners.

“Tico Time is a Costa Rican cruise ship landed in the desert along the Animas River,” said longtime Durango local Rasta Stevie, who helps book shows. “We have one of the most amazing event centers anywhere in the world that’s pure freedom, and it’s the chance of a lifetime.”

Well, that got out of hand

The original idea for Tico Time, Holmes said, was a modest RV park and campground, with room for long-term tiny homes, equidistant between the San Juan Mountains to the north and the deserts of New Mexico to the south.

Having moved with his parents from San Diego to Durango in 1994 when he was 12 years old, Holmes (who also runs a local traffic control company) knew the advantages of Tico Time’s location. He and his wife started to accumulate properties on both sides of the Animas River and now own nearly 100 acres.

But not long after the first RV sites and a sand volleyball court were built, Holmes had the idea to install a zip line and 60-foot adventure tower. And thus forever changed the direction of Tico Time. Admittedly, Holmes said once he starts a project, it’s not uncommon for it to snowball into something larger than first intended.

“This was supposed to be a side project,” Holmes joked. “But then it turned into this overwhelming venture. I’m super ambitious but then get in over my head.”

“You guys want to see a flip?” Holmes asked an excitable group of kids waiting in line for Tico Time’s water slide last week. Looking more like a retired lifeguard – shirtless, red  trunks, sun hat – than a revolutionary resort owner, Holmes plunged down the slide, delivered and forever became a god in these kids’ eyes.

After, he took The Durango Telegraph for a tour of the resort, now in its second year.

For starters, Holmes said the name “Tico Time” is the Costa Rican term for relaxed island living. Holmes and his wife frequently travel to Costa Rica and wanted the resort to feel like a beach vacation in the mountains. “It’s the way time doesn’t matter,” Holmes said.

But time has seemingly sped up for the resort, already with 110 RV campsites and room for hundreds of tent campers. And the attractions keep coming: a 130-foot glorified slip-and-slide; a zip line course across the Animas River; a 40-foot sky swing; a 60-foot mini bungee jump; ponds for swimming and stand-up paddles boarding; and a full 18-hole disc golf course.

“We built it extremely quickly,” he said. “And there’s no way we could have done this in La Plata County.” (For what it’s worth, Tico Time is in good standing with San Juan County as well as the Army Corps of Engineers.)

Holmes and his hometown crew built all the thrill rides. And while to the untrained eye it may give off shades of the infamous “Class Action Park” in New Jersey, Holmes said all his contraptions have been certified by a professional engineer.

Regardless, this fact was likely unbeknownst to one hesitant lady making the 60-foot bungee drop, knees buckling before the leap of faith. “It was fun and not that bad,” Erin Garcia, whose family was visiting from Albuquerque, said after it was all said and done.

Just as essential to the Tico Time experience are the late night happenings.

The scribbling on the white board Friday offered a magic show at 7 p.m., DJ at 8 p.m., fire dancers at 9 p.m. And Saturday night didn’t slow down, with local favorites the Crags taking center stage, followed by a fireworks show.

But this is just the tip of the iceberg, Holmes said. Increasingly, Tico Time is booking bigger acts and large-scale, multi-day festivals. After not being able to get a portable stage across the river to the concert grounds, Holmes just decided to build a professional stage. Several music festivals this fall are expected to bring in about 2,000 - 3,000 people. But years down the line, Holmes said Tico Time will be able to accommodate an estimated 5,000 - 10,000 attendees.

Rasta Stevie, festival producer for Tico Time, said seven festivals are planned to close out the rest of the year. For the Four Corners Reggae Fest over Labor Day weekend, headliners Stephen Marley and Collie Buds will take center stage. And even if you’re not a fan of reggae, booking the musicians is at least a sign of the resort’s potential to bring in bigger names.

“It gives the festival the firepower of international recognition we’re looking for for Tico Time,” Rasta Stevie said.

As night approached Friday, The Mysto Magic Show came on stage to entertain the kids and their parents. Warming the crowd up, magician Mysto the Magi asked the crowd, “Who here is from Colorado!?” One woman raised her hand, yelling “Farmington!” The magician had to inform her Farmington is in New Mexico. Not magic, just geography. Kids were enthralled by Mysto’s tricks, however. Color-changing scarves, ropes with dissolving knots, balloons that by all accounts, should have popped when hit with a pin.

Mysto declined to reveal his mysteries after the show, or even his name.

After, DJ CodeStar kept the party going while the Secret Circus Society lit up the night with a fire dance show. At the end of the night, as this reporter was leaving, a man we can only assume had a few drinks could be heard languidly singing a karaoke country music song off in the distance, his friends politely trying to tell him his song was up.

Though time doesn’t matter in this rogue enclave south of Durango, it’s only the beginning for this resort’s potential, both for locals and tourists. Rasta Stevie said it takes at least five years, but more like 10, for a music festival to bcome profitable and draw in the big names, and Tico Time is in for the long haul.

Over the next few years, more things are in store for Tico Time – improved landscaping and tent camping, and of course, more adventure thrills. It’s been hard, so far, to get people to come down, Holmes said, but eventually he hopes to become one of the centerpieces of entertainment in the area. “Once they come once, they absolutely love it,” he said. 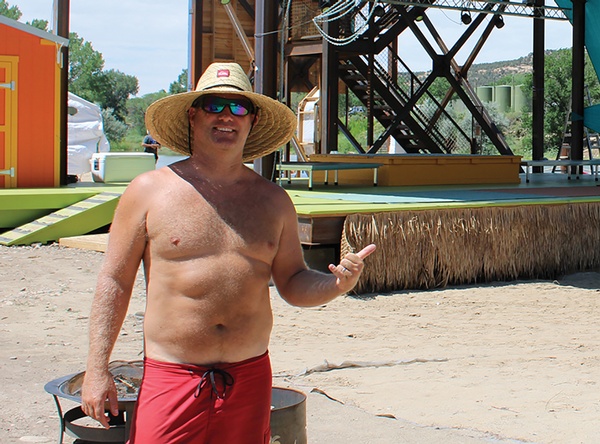 Tico Time owner Robert Holmes said the original idea for the resort was a modest RV?Park and campground. But quickly the project grew into an all-out adventure park and concert venue./ Photo by Jonathan Romeo