Getting off on the right foot
Locally founded nonprofit seeks to better the world, one disc at a time 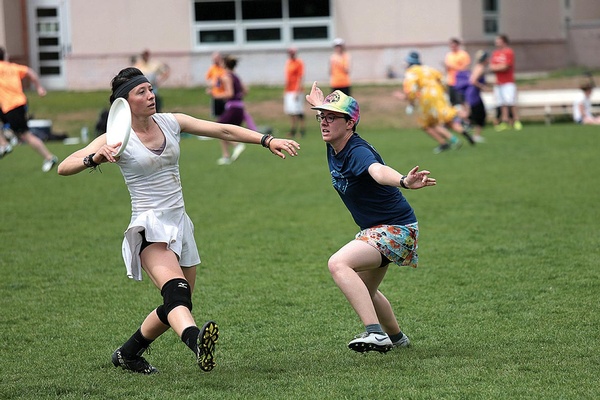 Durango player Melissa May, in blue, defends against a player from Albuquerque at last weekend's Durango Invitational at Riverview./ Photo by Jennaye Derge

Born from the social upheaval of the late ’60s, ultimate frisbee, with its revolutionary tenets of equality and self-governance, forever changed the landscape of organized team sports. But can this free-wheeling pastime, long the domain of tie-dyed college kids with a healthy distrust of authority, change the world?

Trent Simmons thinks so. Simmons, an avid ultimate player and former Durango resident who now lives in Switzerland, is the founder of 10 Million Discs, an international youth-development nonprofit. Founded in 2014 while Simmons still lived in Durango, the organization’s mission is to use the “Spirit of the Game” (caps intentional, as ultimate players take this very seriously) to advance social and humanitarian causes while teaching conflict resolution, gender respect and personal accountability. He also sees it as a way to help groom the world’s future leaders by redefining the concept of winning (sorry, Charlie Sheen).

For the uninitiated, ultimate (which for the most part has dropped the “frisbee” part in favor of “disc” over trademark issues with Wham-O) is the definition of social justice in motion. There are no referees, with players responsible for amicably working out their differences and transgressions in a civilized fashion. Teams are made up of men and women, with no real “positions” other than offense and defense. Body contact is out of the question and personal fouls are seriously frowned upon.

The name “10 Million Discs” obviously comes from Simmons’ vision for the future, with ultimate as a fun, easy-to-learn vehicle for imparting the game’s higher ideals. “What would the world look like if we could get 10 million discs into the hands of kids and people around the world?” he hypothesized. “If we can introduce these qualities in future leaders, the world would become a better place.”

But why ultimate, and not, say, soccer or tiddlywinks.

Well, for starters, there’s the jazziness factor – or lack thereof. Plastic discs are light, cheap, portable and easily slogan-izable for the occasion. All that’s needed to get a little pick-up going is an empty lot or field and 10 or 12 volunteers (even shoes are optional). Rules are easy: get your disc in the opposing end zone; no running with the disc; and when holding the disc, a player must keep one foot planted at all times (the rest is open to interpretation, so get creative.)

And, unlike soccer, which is considered a “boys” sport in many parts of the world (heck it’s even segregated here in the great U.S. of A) ultimate is open to all. This is why Simmons has focused his outreach efforts on countries such as Afghanistan (he is awaiting word on a grant to go there) where womens and girls rights are, shall we say, lacking.

“It’s all about empowerment and personal accountability. A lot of societies don’t have equal rights, but when they get on the field, they are equals,” said Simmons, who, incidentally, is a former soccer player.

Ultimate also has other virtues that extend off the field beyond being able to wow your friends with your mad disc skills at the next barbecue. In the utmost show of sportspersonship, players are tasked with spotting and calling out violations, particularly their own.

“Hopefully, if they spot a violation on the field this will lead them to spot them off the field as well,” Simmons said of the game’s prospective new adherents.

Then there’s that little thing about cheating. Let’s face it, in many refereed sports, as the saying goes, “It’s not a penalty if the ref doesn’t see it.” Simmons feels this is a backwards way of teaching kids it’s not only OK to cheat, but in fact part of the game. He’d like to change that paradigm. “It’ easy to justify that behavior as ‘It’s just the way the game is played,’” he said. “But teaching kids how to bend or break the rules might not be the best for society.”
Speaking of breaking things, Simmons said perhaps the best part of ultimate is that it’s a great way to break the ice. And get kids active and breathing that highly beneficial, mother-recommended fresh air. “It’s a very physical game,” he said.

So just how close is Simmons to his goal, one may wonder? Well, although he’s not keeping count, he has so far infiltrated his adopted country of Switzerland as well as Belgium, Germany, Tunisia and Botswana. He’s also reached out to kids in the once-war torn Balkan states of Hungary, Bosnia, Macedonia, Montenegro, Croatia and Bulgaria.

“That’s why we focused on that region, there’s so much bad blood,” said Simmons. “These young kids, they’re ready to move on. They just need an opportunity to do so.”

Closer to home, ultimate is making inroads as well. Just last weekend, Simmons hosted the ninth annual Durango Invitational at Riverview Sports Complex. The tournament, a fund-raiser for 10 Million Discs, drew six teams from throughout the region. There is also an active core of 20-30 players at Animas High School, where ultimate is part of gym class, and Durango High School has tentatively approved a new ultimate club for next school year.

The sport is also making a ripple on the international scene, in 2015 becoming the first sport without referees to be officially recognized by the IOC. While “on the bubble” for the 2024 Paris Summer Games, Simmons believes it’s practically a shoe-in for Los Angeles in ’28.

“It’s almost guaranteed since it’s a U.S. sport,” he said.

Despite ultimate’s spread, Simmons said occasionally he’ll come across someone who just can’t seem to wrap his or her head around the concept. To them, he concedes there are plenty of other organized team sports out there. But usually, that line of thinking only makes this self-described “full-time volunteer” want to work harder. “When I hear, ‘That won’t work,’ it usually indicates we need to at least try.”

For more on 10 Million Discs, go to www.10milliondiscs.org

A new spin: the not so complete history of ultimate

Apparently, the origins of the game date back to the 1940s before the dawn of plastic, when enterprising students at Amherst College tossed around pie tins for sport. In 1965, under Amherst student Jared Kass and others, the game evolved, using a plastic Frisbee and incorporating concepts from football, basketball and soccer. This game had some of the basics of modern ultimate including scoring by passing over a goal line, advancing the disc by passing, no travelling with the disc, and turnovers on interception or incomplete pass. A few years later, as a summer camp counselor, Kass taught the game to a camper. He, in turn, passed the game onto his friends at Columbia High School, where the first game was played between students in 1968.

The rest, as they probably don’t say, is disc-ory. Eventually, the game spread to other schools and colleges on the Eastern seaboard. In 1975, it debuted out West at the World Frisbee Championships at the Rose Bowl.