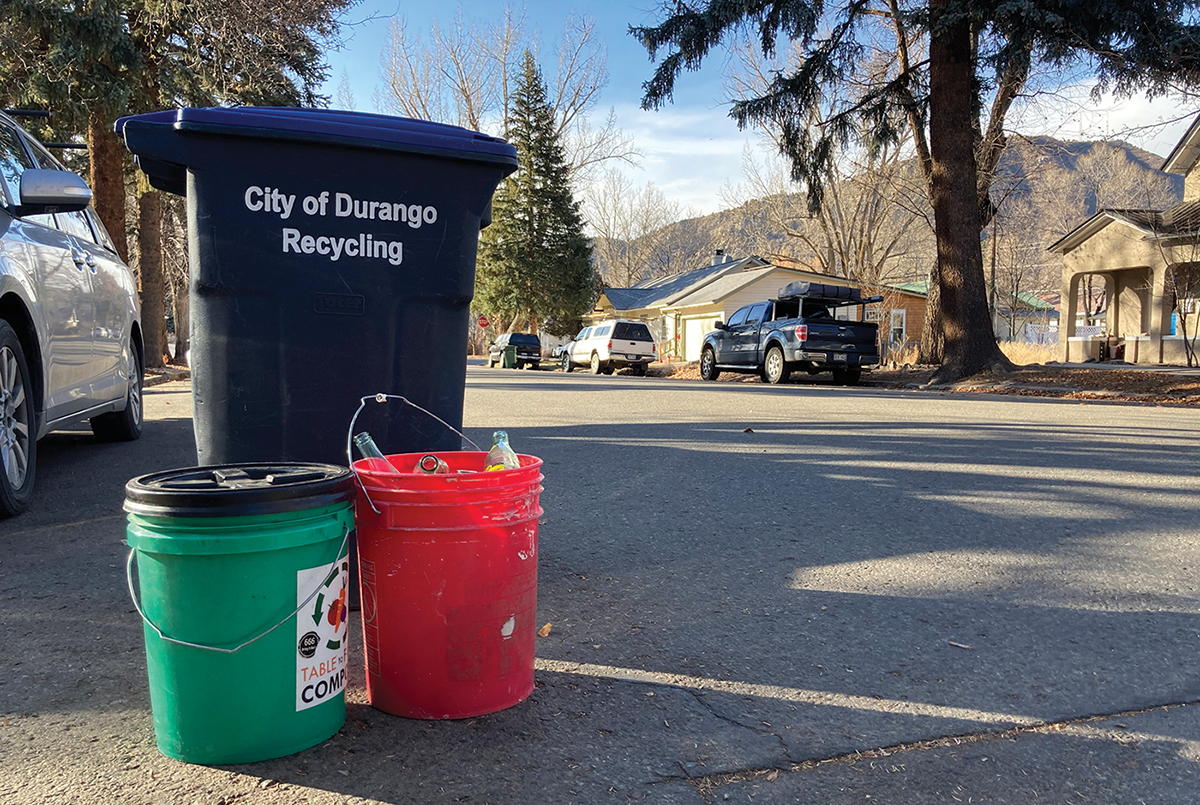 Recycling day in downtown Durango. The "State of Recycling in Colorado Report" gave Durango a gold star for recycling efforts – a rare bright spot in the report that found the state is lagging far behind goals./Photo by Missy Votel

When it comes to recycling in Colorado, things are a bit of a “compost” sandwich if you will. In other words, some good surrounding a not-so-great stinky mess in the middle.

The current scenario was detailed in the annual “State of Recycling and Composting Colorado Report,” which came out last month. Produced by the Colorado Public Interest Research Group (CoPIRG) and EcoCycle, this is the fourth year for the report which offers a detailed look at recycling efforts across the state. The report also offers recommendations and steps to help Colorado reach its waste diversion goals: 51 percent for the Front Range and 15 percent for mountain and rural communities by 2036.

First, let’s start with the “bread” of the sandwich. According to the report, Durango is among the state’s bright spots for recycling. Other so-called “Gold Medal” cities include Boulder, Loveland and Fort Collins. Tied with Aspen, Durango had the highest recycling rate in 2019 outside the Front Range, at 33 percent. The rate was significantly higher than the state average of 15.9 percent.

City of Durango sustainability coordinator Imogen Ainsworth said although she was “pleasantly surprised” by the recognition, this is not the first time Durango has gotten accolades in the report. “They’ve recognized us once before, but it’s nice to see some consistency,” she said. “Part of the success is definitely the people of Durango putting in the effort. It’s everyone doing their part.”

Ainsworth – and the report – also credits Durango’s success to the fact that recycling is included with residents’ trash bills. When people sign up for trash, they also receive a singlestream recycling bin.  “Every resident is automatically signed up, they don’t have to opt-in,” she said.

She said the City also has robust outreach and marketing campaigns, which keeps contamination levels low. In addition,  the it implemented a “What Goes Where” online tool (www.durangorecycles.com) to tell people if, where and how to recycle specific items.

Durango has also benefitted from successful partnerships, such as the one with its materials recovery handler, Friedman Recycling, in Albuquerque. “We are fortunate that Friedman has been able to find markets for hard-to-recycle plastics,” Ainsworth said.

Another factor in Durango’s high waste-diversion rate is its successful partnership with Table to Farm Compost. The private company, which started in 2016, operates under a special use permit from the City and has grown to collect some 1,000 cubic yards of food scraps a year from 400 residential and commercial customers. The scraps, in turn, are mixed with wood scraps to make compost and artisanal soils for local gardens and farms – and, perhaps most importantly, keep greenhouse gases out of the atmosphere.

“It’s exciting, we feel like the business is growing and people are more and more aware of the effects of methane in the atmosphere,” Table to Farm co-owner Monique DiGiorgio said.

DiGiorgio bought Table to Farm in 2018 from founders David Golden and Emily Bowie, and took on partner Taylor Hanson in 2019. The two just announced nearly $300,000 in grants to help fund expansions and upgrades at their composting facility, Savannah Tree Farms. DiGiorgio said the funds will help transform it into a Class III compost facility, one of only a handful in the state. Plans call to ramp up throughput to 32,000 cubic yards over the next several years.

“Our future is to keep scaling up and make an entire line of products that go back into the community,” DiGiorgio said – something known as a “closed loop” system in recycling speak. But, she noted, there is still work to be done to get there. “We should go from 400 customers to thousands,” she said. “We’re doing a good job, but the message is, we have a long way to go.”

Which brings us to the stinky, messy middle of the aforementioned sandwich. According to the report, Coloradoans overall wasted more and recycled less in 2019 than in 2018. In fact, Colorado’s recycling rates are barely struggling to keep up with population growth, and a far cry from the statewide goal of 28 percent by 2021 en route to 2036. The report placed the blame squarely on the Front Range, which is responsible for more than 87 percent of the waste in the state.

However, it goes on to note the problem isn’t as simple as apathetic residents. Rather, myriad issues contribute to the problem, including the high cost of recycling, uncertainty in markets, high cost of transporting materials, and a lack of infrastructure. Moreover, many cities require residents to add recycling to their utilities bill as an additional fee, and many multi-family complexes, where most residents are renters, do not have recycling facilities.

“This strongly suggests that greater investments and systemic policy changes are needed,” the report states.

And this is where the last piece of bread, holding everything together, comes in. While the situation is dire, there are steps that can be taken to keep more waste out of landfills and carbon out of the atmosphere. According to the report, 95 percent of Colorado’s waste could be recycled or composted through simple steps such as more convenient curbside recycling and using more recycled materials in new products.

The report also suggests the packaging and paper industry carry its fair share of the burden through something known as “Extended Producer Responsibility” (EPR) policies. Common in the E.U. and Canada, EPRs require producers to fund the recycling system, rather than governments or ratepayers. Under an EPR model being developed in Washington State, residents would no longer be charged for curbside recycling, with producers financing the cost through fees on products or by internalizing the costs. Producers would also pay for upgrades to recycling infrastructure and education programs. In Colorado, an EPR program for paint was started in 2015 and has successfully increased paint-recycling rates and reduced costs for cities – all while keeping hazardous materials out of the landfill.

In other words, if you build a great sandwich, they will come – and when they’re done, they will recycle the to-go box and compost the leftovers (the parts that can be composted, that is).

“Once you start, it’s hard to go back to throwing food scraps away,” said DiGiorgio. “Every 5-gallon bucket does its part.”

To read the “State of Recycling and Composting” report, go to: tinyurl.com/yx679h9t.